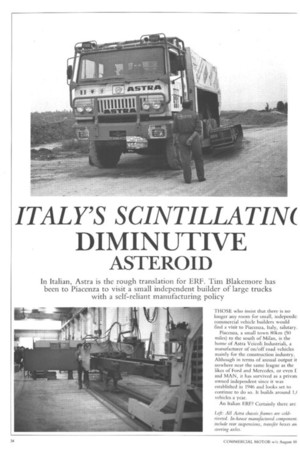 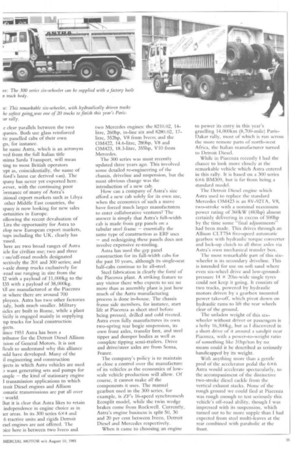 In Italian, Astra is the rough translation for ERE Tim Blakemore has been to Piacenza to visit a small independent builder of large trucks with a self-reliant manufacturing policy

THOSE who insist that there is no longer any room for small, independa commercial vehicle builders would find a visit to Piacenza, Italy, salutary.

Piacenza, a small town 0kin (50 miles) to the south of Milan, is the home of Astra VeicoIi Industriali, a manufacturer of on/off road vehicles mainly for the construction industry. Although in terms of annual output it nowhere near the same league as the likes of Ford and Mercedes, or even II and MAN, it has survived as a privatt owned independent since it was established in 1946 and looks set to continue to do so. It builds around 1,( vehicles a year.

An Italian ERF? Certainly there are

Left: All Astra chassis frames are coldriveted. hi-house manufactured component: include rear suspensions, transfer boxes an steering axles. e clear parallels between the two [panics. Both use glass reinforced tic panelled cabs of their own gn, for instance.

he name Astra, which is an acronym red from the full Italian title )nima Sarda Transport, will mean ling to most British operators :ept as, coincidentially, the name of ford's latest car derived van). The ipany has never yet exported here. Never, with the continuing poor I:it:mance of many of Astra's

itional export markets such as Libya other Middle East countries, the wally is now looking for new sales ,ortunities in Europe.

ollowing the recent devaluation of Lira the opportunity for Astra to elop new European export markets, !taps including the UK, clearly has .eased.

'here are two broad ranges of Astra icle for civilian use; two and three on/off-road models designated aectively the 201 and 300 series; and )-axle dump trucks exclusively for -road use ranging in size from the 12 with a payload of 11,000kg to the 135 with a payload of 38,000kg. 01 are manufactured at the Piacenza at where there are around 700 ployees. Astra has two other factories ,taly, both much smaller. Military ricks are built in Rome, while a plant ;icily is engaged mainly in supplying np trucks for local construction ijects.

tributor for the Detroit Diesel Allison ision of General Motors. It is not ficult to understand why this alliance )uld have developed. Many of the il engineering and construction ijects in which Astra vehicles are used 3 want generating sets and pumps for imple — the kind of stationary engine transmission applications to which troit Diesel engines and Allison :omatic transmissions are put all over world.

But it is clear that Astra likes to retain independence in engine choice as in ter areas. In its 300 series 6X4 and 6 tractive units and rigids Detroit esel engines are not offered. The 3ice here is between two Iveco and

The 300 series was most recently updated three years ago. This involved some detailed re-engineering of the chassis, driveline and suspension, but the most obvious change was the introduction of a new cab.

How can a company of Astra's size afford a new cab solely for its own use, when the economics of such a move have forced much larger manufactuters to enter collaborative ventures? The answer is simply that Astra's full-width cab is made from grp panels on a tubular steel frame — essentially the same type of construction as ERE uses — and redesigning these panels does not involve expensive re-tooling.

Astra has used the grp panel construction for its full-width cabs for the past 10 years, although its single-seat half-cabs continue to be all-steel.

Steel fabrication is clearly the forte of the Piacenza plant. A striking feature to any visitor there who expects to see no more than as assembly plant is just how much of the Astra manufacturing process is done in-house. The chassis frame side members, for instance, start life at Piacenza as sheet steel before being pressed, drilled and cold riveted. Astra even fully manufactures its own two-spring rear bogie suspension, its own front axles, transfer box, and steel tipper and dumper bodies as well as complete tipping semi-trailers. Drive and drive/steer axles are from Soma, France, The company's policy is to maintain as close a control over the manufacture of its vehicles as the economics of lowscale vehicle production will allow. Of course, it cannot make all the components it uses. The manual gearbox used in the 300 series, for example, is ZF's 16-speed synchromesh Ecosplit model, while the twin wedge brakes come from Rockwell. Currently, Astra's engine business is split 50, 30 and 20 per cent between Iveco, Detroit Diesel and Mercedes respectively.

When it came to choosing an engine to power its entry in this year's gruelling 14,000km (8,700-mile) ParisDakar rally, most of which is run across the more remote parts of north-west Africa, the Italian manufacturer turned to Detroit Diesel.

While in Piacenza recently I had the chance to look more closely at the remarkable vehicle which Astra entered in this rally. It is based on a 300 series 6x6 BM309, but is far from being a standard model.

The Detroit Diesel engine which Astra used to replace the standard Mercedes 0M423 is an 8V-92TA, V8, two-stroke with a nominal maximum power rating of 360kW (483hp) almost certainly delivering in excess of 500hp by the time some "final adjustments' had been made. This drives through an Allison CLT754 five-speed automatic gearbox with hydraulic torque converter and lock-up clutch to all three axles via Astra's own mechanical transfer box.

The most remarkable part of this sixwheeler is its secondary driveline. This is intended for use on soft sand where even six-wheel drive and low-groundpressure 14 x 20in-wide single tyres could not keep it going. It consists of two tracks, powered by hydraulic motors driven by a gearbox mounted power take-off, which pivot down on hydraulic rams to lift the rear wheels clear of the ground.

The unladen weight of this sixwheeler without driver or passengers is a hefty 16,300k g, but as I discovered in a short drive of it around a sandpit near Piacenza, with a power-to-weight ratio of something like 31hp/ton by no means could it be described as seriously handicapped by its weight.

With anything more than a gentle prod of the accelerator pedal the 6)<6 Astra would accelerate spectacularly, to the accompaniment of the distinctive two-stroke diesel cackle from the vertical exhaust stacks. None of the rough ground we could find at Piacenza was rough enough to test seriously this vehicle's off-road ability, though I was impressed with its suspension, which turned out to be more supple than I had expected from steel multi-leaves at the rear combined with parabolic at the front.