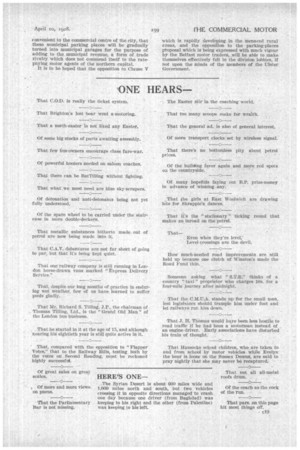 Page 41, 10th April 1928 — ONE HEARS
Close
Noticed an error?
If you've noticed an error in this article please click here to report it so we can fix it.

That C.O.D.is really the ticket system.

That a north-easter is net liked any Easter.

Of some big stocks of parts awaiting assembly. That few bus-owners encourage class fare-war. Of powerful hooters heeded on saloon coaches. That there can be BatTilling without lighting. That what we most need are blue sky-scrapers.

Of detonation and anti-detonants being not yet fully understood.

Of the spare wheel. to be carried utider the staircase in more .double-deckers.

That metallic substances hitherto made out of petrol are now being made into it.

That C.A.V. debentures are not far short of.going to par, but that It's being kept quiet.

That, despite our long months of practice in enduring wet weather, few of us have learned to suffer pools gladly.

That Mr, Richard S. Tillini, LP., the chairman of Thomas Tilling, Ltd., is the " Grand Old Man" of the London bus business.

That he started in it at the age of 15, and although nearing his eightieth year is still quite active in it.

That, compared with the opposition to "Flapper Votes," that to the Railway Bills, testing both by the votes on Second Reading, must be reckoned highly successful'.

Of great sales on great scales.

That the Parliamentary Bar is not missing. The Easter stir in the coaching world.

That too many scoops make for wraith.

That the general ad. is also of general interest. Of more transport clocks set by wireless signal.

That there's no bottomless pity about petrol prices.

Of the building fever again and more red spots oa the countryside.. •• Of. many hopefuls laying out B.P. prize-money in advance of winning any.

_ That the girls at East Woolwich are drawing . lots for Shra.ppie's dances.

That it's the "stationary " ticking round that makes an inroad on the 'petrol.

Even when they're level; Level crossings are the devil.

How much-needed road improvements are still held up because one clutch of Winston's made the Road Fund thin..

Someone asking what " S.T.R." thinks of a country " taxi " proprietor who charges 16s. for a four-mile journey after midnight.

That the C.M.U.A. stands up-for the small man, lest legislators should trample him under foot and 'let railways run hint down.

That :r. H. Thomas would llaye been less hostile to road traffic if he had been a Motorman instead of . an engine driver. Early associations have disturbed his train of thought.

That Hassocks school children, who are taken to and from school by motor vehicles while Evelyn the bear is looseon the Sussex Downs, are said to pray nightly that she may never be recaptured.

That not all all-metal roofs drum.

Of the coach as the cock of the run. • That pars. on this page hit most things off.