Haulier Regains His A Licence 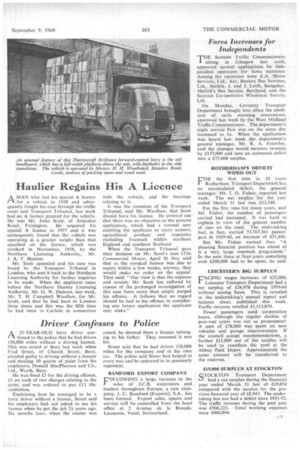 Page 61, 9th September 1960 — Haulier Regains His A Licence
Close
Noticed an error?
If you've noticed an error in this article please click here to report it so we can fix it.
Keywords : Drinking Culture, Law / Crime, Business / Finance

AMAN who lost his special A licence for a vehicle in 1958 and subsequently fought his case through the traffic court and Transport Tribunal, last week had an A licence granted for the vehicle. He was Mr. John Scott, of Arlecdon Road, Frizington. He acquired his special A licence in 1957 and it was subsequently found that the vehicle was operating at a greater weight than that specified on the licence, which was revoked in November, 1958, by the Northern Licensing Authority, Mr. J. A. T. Hanlon.

Mr. Scott appealed and his case was heard by the Transport Tribunal in London, who sent it back to the Northern Licensing Authority for further inquiries to be made. When the applicant came before the Northern Deputy Licensing Authority, Mr. G. W. Duncan, last week, Mr. T. H. Campbell Wardlaw, for Mr. Scott, said that he had been to London three times and this was the fifth time he had been to Carlisle in connection with the vehicle, and the hearings relating to it.

It was the intention of the Transport Tribunal, said Mr. Wardlaw, that Scott should have his licence. He pointed out that there was no objection to the present application, which had a normal user enabling the applicant to carry cement, agricultural produce and requisites excluding livestock within northern England and southern Scotland.

When the Transport Tribunal gave their decision on Mr. Scott's case (The Commercial Motor, April 8) they said that as the revoked licence was due to expire within a few weeks, anyway, they would make no order on the appeal. They said "Our view is that the expense and anxiety Mr. Scott has suffered by reason of the prolonged investigation of this case have more than amply purged his offence. It follows that no regard should be had to his offence in considering any future application the applicant may make."