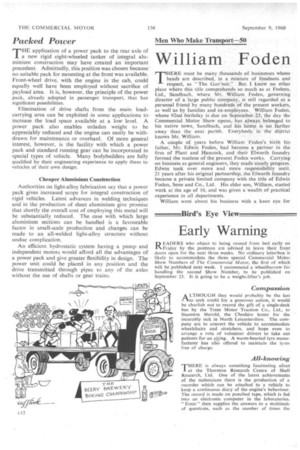 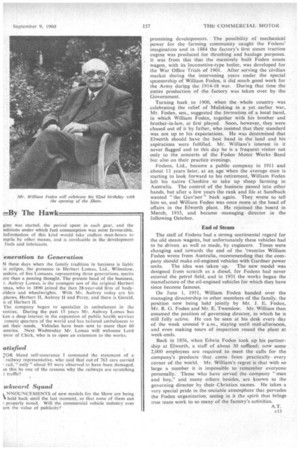 THERE must be many thousands of businesses whose heads are described, in a mixture of fondness and — • respect, as • "The GuvliOr..7 But I know no other place where this title comprehends so much as at Fodens, Ltd., SarKlbach, . where Mr. William Foden, governing director of a large public company, is still regarded as a personal friend by many hundreds of the present workers, as well as by families and ex-emplOyees., William .Foden, whose 92nd birthday is due on September:23, the day the Commercial. Motor Show opens, has always belonged to his native town, Sandbaeh, and his_ home is no. farther away than the .next parish. Evetybody in the district . knows Mr. William.

A couple of years before William Foden 's, birth his father, .Mr. Edwin Fod.en, had become a partner in the firm of Plant and Hancock, and their Elworth foundry formed the nucleus of the present Foden works. Carrying on business as general engineers, they made steady progress. Edwin took over more and more responsibility until, 21 years after his original partnership, the Elworth foundry became a private limited company with the title of Edwin Foden, Sons and Co., Ltd. His eider son, William, started work at the age of 16, and was given a wealth of practical experience in all departments.

William went about his business with a keen eye for promising developments. The possibility of mechanical power for the farming community caught the Fodens' imagination and in 1884 the factory's first steam traction engine was produced for threshing and haulage purposes. It was from this that the massively built Foden steam wagon, with its locomotive-type boiler, was developed for the War Office Trials of 1901. After serving the civilian market during the intervening years under the special sponsorship of William Foden, it did much good work for the Army duripg the 1914-18 war. During that time the entire production of the factory was taken over by the Government.

Turning back. to 1900, when the whole country was celebrating the relief of Mafeking in a yet earlier war, Mr. Foden, sen., suggested the formation of a local band, in which William Foden, together with his brother and brother-in-law, at first played. Soon, however, they were chased out of it by father, who insisted that their standard was not up to his expectations. He was determined that Elworth should have the best band in the land and his aspirations were fulfilled. Mr. William's interest in it never flagged and to this day he is a frequent visitor not only to the concerts of the Foden Motor Works Band but also on their practice evenings.

Fodens, Ltd., became a public company in 1911 and about 13 years later, at an age when the average man is starting to look forward to his retirement, William Foden left his native Cheshire to take up sheep farming in Australia. The control of the business passed into other hands, but after a few years the rank and ale at Sandbach wanted "the Guv'nor " back again. They wrote to tell him so, and William Foden was once more at the head of affairs in the Elworth plant. He rejoined the board in March, 1935, and became managing director in the following October.

End of Steam The staff of Fodens had a strong sentimental regard for the old steam wagons, but unfortunately these vehicles had to be driven., as well as made, by engineers. Times were changing and towards the end of the 'twenties William Foden wrote from Australia, recommending that the company should make oil-engined vehicles with Gardner power units. The idea was taken up. The new model was designed from scratch as a diesel, for Fodens had never entered the petrol field, and in 1931 the works began the manufacture of the oil-engined vehicles for which they have since become famous.

On June 1, 1951, William Foden handed over the managing directorship to other members of the family, the position now being held jointly by Mr. J. E. Foden, Mr. R. G. Foden and Mr. E. Twemlow. Mr. William then assumed the position of governing director, in which he is still fully active. He can be seen at his desk every day of the week around 9 a.m., staying until mid-afternoon, and even making tours of inspection round the plant at week-ends.

Back in 1856, when Edwin Foden took up his partnership at Elworth, a staff of about 30 sufficed; now some 2,000 employees are required to meet the calls for the company's products that come from practically every corner of the world. Mr. William's regret is that with so large a number it is impossible to remember everyone personally. Those who have served the company "man and boy," and many others besides, are known to the governing director by their Christian names. He takes a very special pride in the sociable atmosphere that pervades the Foden organization, seeing in it the spirit that brings true team work to so many of the factory's activities.