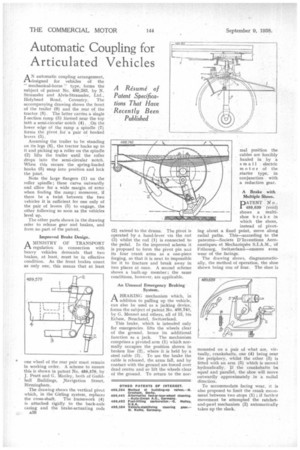 Page 56, 9th September 1938 — Automatic Coupling for Articulated Vehicles
Close
Noticed an error?
If you've noticed an error in this article please click here to report it so we can fix it.

AN automatic coupling arrangement, designed for vehicles of the " mechanical-horse " type, forms the subject of patent No. 489,383, by N. StraussIer and Alvis-Straussler, Ltd., Holyhead Road, Coventry. The accompanying drawing shows the front of the trailer (9) and the rear of the tractor (8). The latter carries a single I-section ramp (3) formed near the top into a semi-circular notch (4). On the lower edge of the ramp a spindle (7) forms the pivot for a pair of hooked levers (5) ,

Assuming the trailer to be standing on its legs (6), the tractor backs up to it and picking up a roller on the spindle (2) lifts the trailer until the roller drops into the semi-circular notch. When this occurs the spring-loaded hooks (5) snap into position and lock the joint.

Note the large Hangers (1) on the roller spindle ; these curve outwardly and allow for a wide margin of error when finding the ramp ; moreover, if there be a twist between the two vehicles it is sufficient for one only of the pair of levers (5) to engage, the other following so soon as the vehicles level up.

The other parts shown in the drawing refer to release gear and brakes, and form no part of the patent.

A MINISTRY OF TRANSPORT 1—i regulation in connection with heavy vehicles demands that two brakes, at least, must be in effective condition. As the front brakes count as only one, this means that at least

• one wheel of the rear pair must remain in working order. A scheme to ensure this is shown in patent No. 489,579, by J. Pratt and G. Manley, both of Guildhall Buildings, ;slavigation Street, Birmingham.

The drawing shows the vertical pivot which, in the Girling system, replaces

the cross-shaft. The framework (4) is attached rigidly to the back-axle casing and the brake-actuating rods A38

(2) extend to the drums. The pivot is operated by a hand-lever via the rod (3) whilst the rod (1) is connected to the pedal. In the improved scheme it is proposed to form the pivot pin and its four crank arms as a one-piece forging, so that it is next to impossible for it to fracture and break away in two places at once. A second scheme shows a built-up member ; the same conditions, however, are applicable.

A BRAKING mechanism which, in

addition to pulling up the vehicle, can also be used as a jacking device, forms the subject of patent No. 488,748, by G. Mennet and others, all of 15, his Ecluse, Neuchatel, Switzerland.

This brake, which is intended only for emergencies. lifts the wheels clear of the ground, hence its additional function as a jack. The mechanism comprises a pivoted arm (1) which normally occupies the position shown in broken line (2), where it is held by a steel cable (3). To use the brake the cable is released, the arms fall, and by contact with the ground are forced over dead centre and so lift the wheels clear of the ground. To return to the nor anal position the cables are forcibly hauled in by a small electric motor of the starter type, in conjunction with a. reduction gear.

A Brake with Multiple Shoes.

The drawing shows, diagrammatically, the method of operation, the shoe shown being one of four. The shoe is mounted on a pair of what are, virtually, crankshafts, one (4) being near the periphery, whilst the other (3) is fitted with an arm (5) which is moved hydraulically. If the crankshafts be equal and parallel, the shoe will move outwardly approximately in a radial direction.

To accommodate facing wear, it is also proposed to limit the crank movement between two stops (1) ; if furth-r movement be attempted the ratchetand-pawl mechanism (2) automatically takes up the slack.