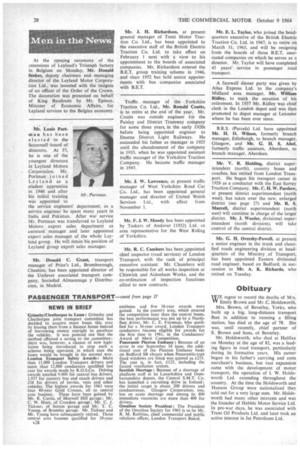 At the opening ceremony of the extensions of Leyland's Triumph factory in Belgium on Monday, Mr. Donald Stokes, deputy chairman and managing director of the Leyland Motor Corporation Ltd., was invested with the insignia of an officer of the Order of the Crown. The decoration was presented on behalf of King Baudouin by Mr. Epinoy, Minister of Economic Affairs, for Leyland services to the Belgian economy.

Mr. Louis Portman has been elected to the Scammell board of directors. At 37, he is one of the youngest directors in Leyland Motors Corporation. Mr. Portman joined Leyland as a student apprentice in 1946 and after his initial training was appointed to the service engineers' department; as a service engineer he spent many years in India and Pakistan. After war service Mr. Portman was transferred to Leyland Motors export sales department as assistant manager and later appointed export sales manager of the whole Leyland group. He will retain his position of Leyland group export sales manager.

Mr. Donald • C. Grant, transport manager of Price's Ltd., Bromborough, Cheshire, has been appointed director of the Unilever associated transport company, Sociedad Alnucenage y Distribucion, in Madrid. Mr. J. H. Richardson, at present general manager of Trent Motor Traction Co. Ltd., has been appointed to the executive staff of the British Electric Traction Co. Ltd. to take effect on February 1 next with a view to his appointment to the boards of associated companies. Mr. Richardson entered the B.E.T. group training scheme in 1946, and since 1952 has held senior appointments with bus companies associated with B.E.T.

Traffic manager of the Yorkshire Traction Ca. Ltd., Mr. Ronald Coutts, is to retire at the end of the year. Mr. Coutts was outside engineer for the Paisley and District Tramway company for some three years, in the early 1920s before being appointed engineer to Deame District Light Railways. He succeeded his father as manager in 1925 until the abandonment of the company in 1933, when he was appointed assistant traffic manager of the Yorkshire Traction Company. He became traffic manager in 1945.

Mr. F. J. W. Moody has been appointed by Taskers of Andover (1932) Ltd. as area representative for the West Riding of Yorkshire.

Mr. R. C. Cambers has been Appointed chief inspector. (road services) of London Transport, with the rank of principal executive assistant. Mr. Chambers will be responsible for all works inspection at Chiswick and Aldenharn Works, and the co-ordination of inspection functions allied to new contracts.

Mr. E. L. Taylor, who joined the headquarters executive of the British Electric Traction Co. Ltd. in 1947, is to retire on March 31, 1965, and will be resigning from the boards of • those B.E.T. associated companies on which he serves as a director. Mr. Taylor will have completed 45 years' service in passenger road transport.

A farewell dinner party was given by Atlas Express Ltd. to the company's Midland area manager, Mr. William Ridley, to mark the occasion of his retirement. In 1937 Mr. Ridley was chief clerk in the London depot and was then promoted to depot manager at Leicester where he has been ever since.

Mr. G. H. Oversby-Powell, at present a senior engineer in the trunk and classified roads engineering division at headquarters of the Ministry , of Transport, has been appointed Eastern divisional road engineer, based on Bedford, in succession to Mr. A. K. Richards, who retired on Tuesday.