DISPOSAL OF REDUNDANT SERVICE COACHES I N reply to a 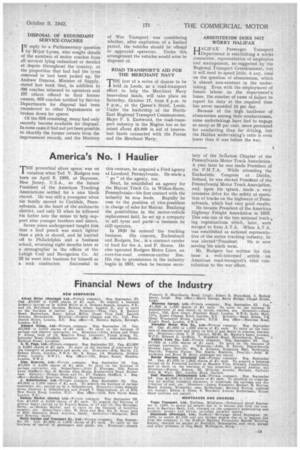 Page 21, 9th October 1942 — DISPOSAL OF REDUNDANT SERVICE COACHES I N reply to a
Close
Noticed an error?
If you've noticed an error in this article please click here to report it so we can fix it.
Keywords : Leeds, Leeds City Region, Transport, Bus, United States Navy

Parliamentary question by Major Lyons, who sought details of the number's of motor coaches from all services lying redundant or derelict at depots throughout the country, or the proportion that had had the tyres removed or had been jacked up, Sir Andrew Duncan, Minister of Supply, stated last week that, in addition to 206 coaches returned to operators and 157 others offered to their former owners, 658 coaches notified by Service Departments for disposal had been transferred to other Departments or broken down for spares.

Of the 616 remaining, many had only recently become available for disposal. In some cages it had not yet been possible to identify the former owners from the impressment records, and the Ministry of War Transport was considering whether, after expiration of a limited period, the vehicles should be offeted to approved operators. Under this arrangement the vehicles would soon be disposed of.

rrHE first of a series of dances to be J. held ..in Leeds, as a road-transport effort, to help the Merchant Navy benevolent funds, will take place on Saturday. October 17, froni 3.p.m. to 9 p.m., at the Queen's Hotel, Leeds. Under the leadership of the NorthEast Regional Transport Commissioner, Major F. S. Eastwood, the road-transport industry in the Region has so far raised about £3-,000 in aid of benevolent funds connected with the Forces and the Mercbant Navy.

ABSENTEEISM DOES NOT WORRY HALIFAX

HALIFAX Passenger Transport 'Department is establishing a works committee, representative of employees and management, as suggested by the Regional Transport Commissioner, but it will need to spend little, ii any, time on the question of absenteeism, which is almost. non-existent in the undertaking. Even with the employment of female labour on the department's buses, the number of cases of failure to report for duty at the required time has never exceeded 10 per day.

Because of the high incidence of absenteeism among their conductresses, some undertakings have had to engage as many as 20 per cent. more personnel for conducting than for driving, but the Halifax undertaking's ratio is even lower than it was before the war.