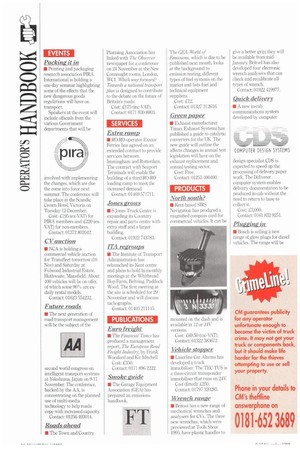 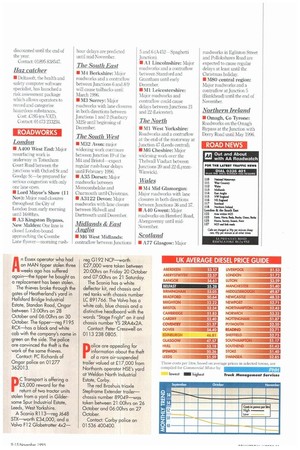 Page 32, 9th November 1995 — EVENTS
Close
Noticed an error?
If you've noticed an error in this article please click here to report it so we can fix it.
Keywords : Transport In Buckinghamshire, Road Transport, Roadworks, Contraflow Lane Reversal, M1 Motorway, Traffic Congestion, Motorways In The Republic Of Ireland, Motorway, Junction

• Printing and packaging research association PIRA International is holding a one-day seminar highlighting some of the effects that the new dangerous goods regulations will have on transport.

Speakers at the event will include officials from the various Government departments that will be involved with implementing the changes, which are due the come into force next summer. The conference will take place at the Scandic Crown Hotel. Victoria on Tuesday 12 December.

• NCA is holding a commercial vehicle auction for Transfleet tomorrow (10 Nov) and Saturday at Fulwood Industrial Estate, Huthwaite, Mansfield, About 400 vehicles will be on offer, of which some 90% are exdaily rental models.

• The next generation of road transport management will be the subject of the second world congress on intelligent transport systems at Yokohama, Japan on 9-11 November. The conference, backed by the AA, is concentrating on the planned use of multi-media technology to help roads cope with increased capacity.

I The Town and Country Planning Association has linked with The Observer newspaper for a conference on 24 November at the New Connaught rooms, London, WC1. Which way fin-wardP Towards a national transport plan is designed to contribute to the debate on the future of Britain's roads,

• RU-RD operator Exxtor Ferries has agreed on an extended contract to provide services between Immingham and Rotterdam. The contract with Seaport Terminals will enable the building of a third RD-RD loading ramp to meet the increased demand.

• S Jones Truck Centre is expanding its Coventry repair and parts centre with extra staff and a larger Contact: 01922 743783.

• The Institute of Transport Administration has relaunched its Kent centre and plans to hold bi-monthly meetings at the Whitbread Hop Farm, Beltring, Paddock Wood. The first meeting at the site is scheduled for 29 November and will discuss tachographs.

• The Financial Times has produced a management report, The European Road Freight Industry, by Frank Worsford and Kit Mitchell.

• The Garage Equipment Association (GEA) has prepared an emissions handbook.

The GEA World of Emissions, which is due to be published next month, looks at the background to emission testing, different types of fuel systems on the market and lists fuel and technical equipment suppliers.

• Exhaust manufacturer Timax Exhaust Systems has published a guide to catalytic converters for the UK. The new guide will outline the affects changes in annual test legislation will have on the exhaust replacement and annual testing sector.

• Kent-based SIRS Navigation has produced a magnified compass card for commercial vehicles. It can be mounted on the dash and is available in 12 or 24V versions.

• Laserline Car Alarms has developed a truck immobiliser. The TEC-TUS is a three-circuit transponder immobiliser that runs on 24V Cost (fitted): £250.

• Britool has a new range of mechanical wrenches and analysers for CVs. The three new wrenches, which were previewed at Tools Show 1995. have plastic handles to give a better grip; they will be available from midJanuary. Britool has also developed four electronic wrench analysers that can check and reclibrate all types of wrench.

• A new in-cab communications system developed by computer design specialist CDS is expected to speed up the processing of delivery paper work. The Deliverer computer system enables delivery documentation to be produced in-cab without the need to return to base to collect it.

• Bosch is selling a new range of glow plugs for diesel vehicles The range will be discounted until the end of the year.

• Deltasoft, the health and safety computer software specialist, has launched a risk assessment package which allows operators to record and categorise hazardous substances..

• A400 West End: Major resurfacing work is underway in Tottenham Court Road between the junctions with Oxford St and Goodge St-be prepared for serious congestion with only one lane open.

hour delays are predicted until mid-November.

• M4 Berkshire: Major roadworks and a contraflow between Junctions 6 and 8/9 will cause tailbacks until March 1996.

• M3 Surrey: Major roadworks with lane closures in both directions between Junctions 1 and 2 (Sunbury M25) until beginning of December.

• A35 Dorset: Major roadworks between Morecombelake and Charmouth until Christmas.

• A3122 Devon: Major roadworks with lane closure between Halwell and Dartmouth until December.

• M6 West Midlands: contraflow between Junctions 5 and 6 (A452 -Spaghetti Junction).

• Al Lincolnshire: Major roadworks and a contraflow between Stamford and Grantham until early December.

• MI Leicestershire: Major roadworks and contraflow could cause delays between Junctions 21 and 22 (Leicester).

• M1 West Yorkshire: Roadworks and a contraflow at the end of the motorway at Junction 47 (Leeds central).

• M6 Cheshire: Major widening work over the Thelwall Viaduct between Junctions 20 and 22 (LymmWinwick).

Wales • M4 Mid Glamorgan: Major roadworks with lane closures in both directions between Junctions 36 and 37.

roadworks in Eglinton Street and Pollokshaws Road are expected to cause regular delays at least until the Christmas holiday.

• M80 central region: Major roadworks and a contraflow at Junction 5 (Bankhead) until the end of November.

• Omagh, Co Tyrone: Roadworks on the Omagh Bypass at the Junction with Derry Road until May 1996.