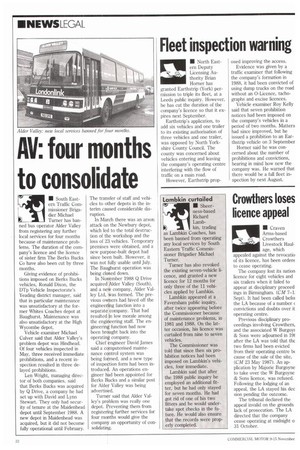 Page 24, 9th November 1989 — AV: four months to consolidate
Close
Noticed an error?
If you've noticed an error in this article please click here to report it so we can fix it.
Keywords : Counties Of England, Geography Of England, Alder Valley, Hampshire, Baughurst

• South Eastern Traffic Commissioner Brigadier Michael Turner has banned bus operator Alder Valley from registering any further local services for four months because of maintenance problems. The duration of the company's licence and the licence of sister firm The Berks Bucks Co have also been cut by three months.

Len Wright, managing director of both companies, said that Berks Bucks was acquired by Q Drive, a company he had set up with David and Lynn Stewart. They only had security of tenure at the Maidenhead depot until September 1988. A new depot in Maidenhead was acquired, but it did not become fully operational until February. The transfer of staff and vehicles to other depots in the interim caused considerable disruption.

In March there was an arson attack on the Newbury depot, which led to the total destruction of the workshop and the loss of 23 vehicles. Temporary premises were obtained, and a new purpose-built depot had since been built. However, it was not fully usable until July. The Baughurst operation was being closed down.

Chief engineer David James said a computerised maintenance control system was being formed, and a new type of inspection form had been introduced. An operations engineer had been appointed for Berks Bucks and a similar post for Alder Valley was being advertised.

Turner said that Alder Valley's problem was really one depot. Preventing them from registering further services for four months would give the company an opportunity of consolidating.