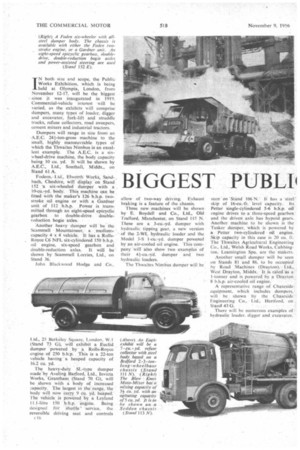 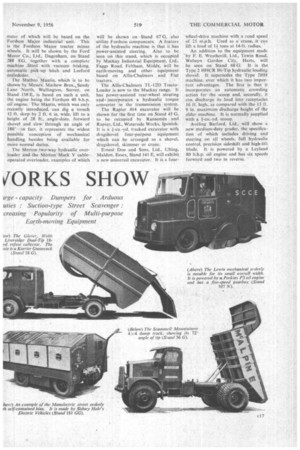 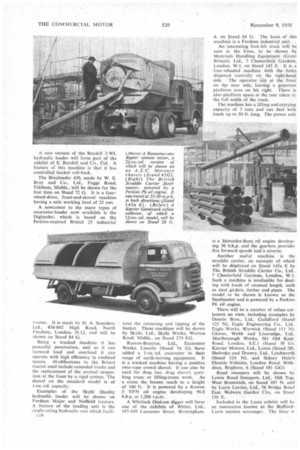 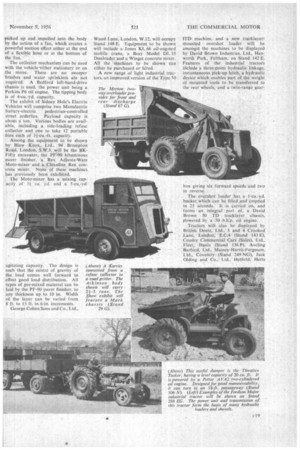 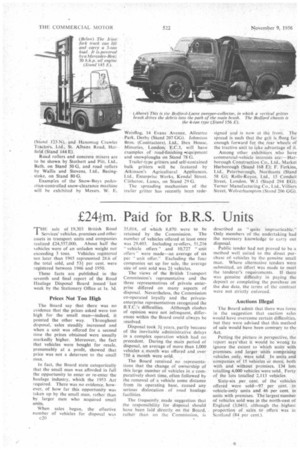 IN both size and scope, the Public Works Exhibition, which is being held at Olympia, London, from November 12-17, will be the biggest since it was inaugurated in 1919. Commercial-vehicle interest will be varied, as the exhibits will comprise dumpers, many types of loader, digger and excavator, fork-lift and straddle trucks, refuse collectors, road sweepers, cement mixers and industrial tractors.

Dumpers will range in size from an A.E.C. 241--ton-gross machine to the small, highly manceuvrable types of which the Thwaites Nimbus is an excellent example. The A.E.C. is a sixwheel-drive machine, the body capacity being 10 Cuyd. It will be shown by A.E.C., Ltd., Southall, Middx., on Stand 61 A.

Fodens, s Ltd., Elworth Works, Sandbach, Cheshire, will display -on Stand 152 'a six-wheeled dumper with a 10-cu.-yd. body. This machine can be _ fitted with the maker's 126 b.h.p. twostroke oil engine or with a Gardner unit of 112 b.h.p. Power is transmittcd through an eight-speed epicyclic gearbox to double-drive doublereduction bogie axles.

Another heavy dumper will be the Seammell Mountaineer, a mediumcapacity 4' x 4 vehicle. It has a RollsRoyce C6 NFL six-cylindered 150 b.h,p. oil engine, six-speed gearbox and double-reduction axles. It will be shown by Scammell Lorries, Ltd., on Stand 36.

The heavy-duty SL-type dumper made by Aveling Barford, Ltd., Invicta Works, 'Grantham (Stand 70 G), will be shown with a body of increased -.:apacity. The largest in the range, the body will now carry 9 Cu. yd. heaped: The vehicle is powered by a Leyland 11.1-litre 150 b.h.p. engine. Being designed for shuttle service, the reversible driving seat and controls

allow of two-way driving. Exhaust braking is a feature of the chassis.

The Thwaites Nimbus dumper will be

seen on Stand 106 N. It' has a steel' skip of 16-cu.-ft. level capacity. Its Petter single-cylindered 5-6 b.h.p. oil engine drives to a three-speed gearbox and the driven axle has hypoid gears. Another machine to be shown is the Tusker dumper, which is powered by a Fetter two-cylindered oil engine. Skip capacity in this case is 20 cu. ft. The Thwaites Agricultural Engineering Co., Ltd., Welsh Road Works, Cubbington, Leamington Spa, are the makers.

Another small dumper will be seen on Stands 81 and 86, to be occupied by Road Machines (Drayton). Ltd., West Drayton. Middx. It is rated As a 1-tonner and is powered by a Drayton 8 b.h.p: air-cooled oil engine.

A representative range of Chaseside equipment, which includes dumpers, will be shown by the Chaseside Engineering Co., Ltd., Hertford, on Stand 43 G.

There will be numerous examples of hydraulic loader, digger and excavator,

many of which will be based on the Fordson Major industrial unit. This is the Fordson Major tractor minus wheels. It will be shown by the Ford Motor Co., Ltd., Dagenham, on Stand 288 EG. together with a complete machine fitted with vacuum braking. automatic pick-up hitch and Leeford muledozer.

The Matbro Mantis, which is to be shown by Messrs. Mathew Bros.Sandy Lane North, Wallington, Surrey, on Stand 158E, is based on such a unit, the engine being the Fordson 40 b.h.p. oil engine. The Mantis, which was only recently introduced, can dig a trench 12 ft. deep by 2 ft. 6 in. wide, lift to a height of 28 ft., angle-doze, forward shovel and slew ' through an angle of fact, it represents the widest possible conception of mechanical handling besides being available for more normal duties.

The Merton two-way hydraulic overloader and the Merton Mark V cableoperated overloader, examples of which will be shown on Stand 67 G, also utilize Fordson components. A feature of the hydraulic machine is that it has power-assisted steering. Also to be seen on this stand, which is occupied by Mackay Industrial Equipment, Ltd.. Faggs Road. Feltham, Middx, will be earth-moving and other equipment based on Allis-Chalmers and Fiat tractors.

The Allis-Chalmers TL-12D TractoLoader is new to the Mackay range. It has power-assisted rear-wheel steering and. incorporates a hydraulic torque converter in the transmission system.

The Rapier 414 excavator will be shown for the first time on Stand 45 G. to he occupied by Ransomes and Rapier, Ltd., Waterside Works, Ipswich. It is a t-cu -yd. tracked excavator with dragshovel four-purpose equipment which can be arranged as a shovel, dragshovel. skimmer or crane,

Ernest Doe and Sons, Ltd.. tilting, Maldon. Essex, Stand 141 E, will exhibit a new universal excavator. It is a four

An addition to the equipment made 'by F. E. WcatherilL Ltd., Tewin Road, Welwyn Garden City, Herts, will be seen on Stand 68 G. it is the Type 2 HHCR I-Ii-Tip hydraulic loading shovel. It supersedes the Type 2HH machine, over which it has two important advantages. The first is that it incorporates an automatic crowding action for the scoop and, secondly, it can discharge its load into receptacles 16 ft. high, as compared with the 13 ft. 9 in. maximum discharge height of the older machine. It is normally supplied with a --cu-yd. scoop.

Aveling Barford. Ltd., will show a new medium-duty grader, the specification of which includes driving and steering on all wheels, full hydraulic control, precision sideshift and high-lift blade. Tt is powered by a Leyland 80 b.h,p, oil engine and has six speeds forward and two in reverse.

A new version of the Boydell 2-WL hydraulic loader will form part of the exhibit of E. Boydell and Co., ltd. A feature of this machine is that it has controlled bucket roll-back.

The Brayloader 430, made by W. E. Bray and Co., Ltd„ Faggs Road, Feltham, Middx., will be shown for the first time on Stand 72 G. It is a fourwheel-drive, front-end-shovel machine having a safe working load of 25 cwt.

A newcomer to the many types of excavator-loader now available is the Digloader, which is based on the Perkins-enginecl Bristol 25 industrial tractor. It is made by H. A. Saunders, Ltd., 836-842 High Road, North Finchley, London, N.12, and will be shown on Stand 84 G.

Being a tracked machine it has powerful penetration, and as it can forward load and overload it can operate with high efficiency in confined spaces_ Modifications to the Bristol tractor used include extended tracks and the replacement of the normal suspension at the front by a rigid system. The shovel on the standard model is of 4-cu.-yd. capacity.

Examples of the Skyhi Quality hydraulic loader will be shown on Fordson Major and Nuffield tractors. A feature of the loading unit is the single-acting hydraulic ram which Neill cl 8 tatcs the retrieving and tipping of the bucket. These machines will be shown by Skyhi, Ltd., Skyhi Works, Worton Road, Middx.. on Stand 279 EG.

Ruston-Bucyrus, Ltd., Excavator Works. Lincoln (Stand 74 G), have added a 1-cu.:yd. excavator to their range of earth-moving equipment. It is a tracked machine having a positive twin-rope crowd shovel. It can also be used for drag line, drag shovel, grabbing crane or lifting-crane work. As a crane the booms reach to a height of 100 ft. It is powered by a Ruston 5 YFN oil engine developing 96.8 b.h.p. at 1,200 r.p.m.

A Whitlock Dinkum digger will form one of the exhibits of Witlor. Ltd., 107-109 Lancaster Street. Birmingham. 4. on Stand 64 G. The basis of this machine is a Fordson industrial unit.

An interesting fork-lift truck 'will be seen in the Irion, to be shown by Materials Handling Equipment (Great Britain), Ltd., 7 Chesterfield Gardens, London, W.1, on Stand 145 E. It is a four-wheeled machine with the forks disposed centrally on the right-hand side. The operator sits at the front on tile near side, leaving a generous platform area on his right. There is also platform space at the rear taken to the full width of the truck.

The machine has a lifting and carrying capacity of 3 tons and can deal with loads up to 50 ft. long. The power unit is a Mercedes-Benz oil engine developing 30 b.h.p, and the gearbox provides five forward speeds and a reverse.

Another useful machine is the straddle carrier, an example of which will be displayed on Stand 145a E by The British Straddle Carrier Co., Ltd.. 7 Chesterfield Gardens, London, W.I. Such a machine is invaluable for dealing with loads of unusual length, such as steel girders, timber and pipes. The model to be shown is known as the Steelmaster and is powered by a Perkins P6 oil engine.

Included in the Lacre exhibit will be an innovation known as the BedfordLacre suction scavenger. The line! is picked up and impelled into the body by the action of a fan, which creates a powerful suction effect either at the end of a flexible hose or at the bottom of the fan.

The collector mechanism can be used with the vehicle-either stationary or on the move. There are no sweeper brushes and water sprinklers are not required. A Bedford left-hand-drive chassis is used, the power unit being a Perkins P6 oil engine. The tipping body is of 4-cu.-yd. capacity.

The exhibit of Sidney Hole's Electric Vehicles will comprise two lvlanulcetric battery-electric pedestrian-controlled street orderlies. Payload capacity is about a ton. Various bodies are available, including a side-loading refuse collector and one to take 12 portable bins each of 3+-cu.-ft. capacity.

Among the equipment to be shown by Blaw Knox, Ltd., 94 Brornpton Road, London, S.W.3, will be the BKFifty excavator, the •PF-90 bituminous paver finisher, a . Rex Adjusta-Wate Moto-mixer and a Cleanline Rex concrete mixer. None of these machines has previously been exhibited.

agitating capacity. The design is such that the centre of gravity of the load comes well forward to effect good load distribution. All types of pre-mixed material can he laid by the PF-90 paver finisher, to any thickness up to 10 in. Width of the layer can he varied from 8 ft. to 13 ft. in 6-in. increments.

George Cohen Sons and Co., Ltd., Wood Lane, London, W.I2, will occupy Stand 148 E. Equipment to be shown will include a Jones KL 66 oil-engined mobile crane, a Bray Model DL 35 Dualoader and a Wingct concrete mixer. All the rhaclaines to be shown can either be purchased or hired.

A new range of light industrial tractors, an improved version of the Type 50

LTD machine, and a new tracklayermounted overshot loader will be amongst the machines to be displayed by David Brown Industries, Ltd., Han worth Park, Feltham, on Stand 142 E. Features of the industrial tractors include a three-point hydraulic linkage, instantaneous pick-up hitch, a hydraulic

• device which enables part of the weight of mounted tools to be transferred to the rear wheels, and a twin-range gear box giving six forward speeds and two in reverse. •

The overshot loader has a I-cu.-yd. bucket which can be filled and emptied in 23 seconds. It is carried on, and forms an integral part of, a David Brown 50 TD tracklayer , chassis, p'owered by a 50.11.11p. oil engine. Tractors will also be displayed by British Deutz. Ltd„ 3 and 4 Crooked

Road rollers and concrete mixers are to be shown by Stothert and Pitt, Ltd., Bath, on Stand 50G, and road rollers by Wallis and Stevens. Ltd., Basingstoke, on Stand 80 G.

The spreading mechanism of the trailer gritter has recently been rede

signed and is now at the front. The spread is such that the grit is flung far enough forward for the rear wheels of the tractive unit to take advantage of it.