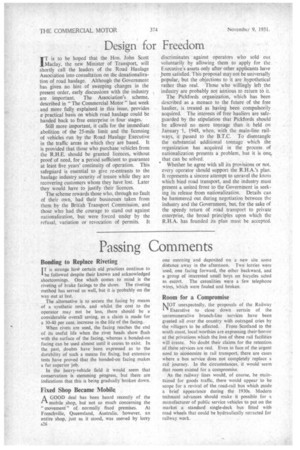 Page 28, 9th November 1951 — Design for Freedom
Close
Noticed an error?
If you've noticed an error in this article please click here to report it so we can fix it.

IT is to be hoped that the Hon. John Scott Maclay, the new Minister of Transport, will shortly call the leaders of the Road Haulage Association into consultation on the denationalization of road haulage. Although the Government has given no hint of sweeping changes in the present order, early discussions with the industry are important. The Association's scheme, described in "The Commercial Motor" last week and more fully explained in this issue, provides a* practical basis on which road haulage could be handed back to free enterprise in four stages.

Still more important, it calls for the immediate abolition of the 25-mile limit and the licensing of vehicles run by the Road Haulage Executive in the traffic areas in which they are based. It is provided that those who purchase vehicles from the R.H.E. should be granted licences, without proof of need, for a period sufficient to guarantee at least five years' continuity of operation. This safeguard is essential to give re-entrants to the haulage industry security of tenure while they are st customers whom they have lost. Later they would have to justify their licences.

The scheme rewards those who, through no fault of their own, had their businesses taken from them by the British Transport Commission, and those who had the courage to stand out against nationalization, but were forced under by the refusal, variation or revocation of permits. It discriminates against operators who sold OM voluntarily by allowing them to apply for the Executive's assets only after other applicants have been satisfied. This proposal may not be universally popular, but the objections to it are hypothetical rather than real. Those who willingly left the industry are probably not anxious to return to it.

The Pickfords organization, which has been described as a menace to the future of the free haulier, is treated as having been compulsorily acquired. The interests of free hauliers are safeguarded by the stipulation that Pickfords should be allowed no more tonnage than it held on January -1, 1948, when, with the main-line railways, it passed to the B.T.C. To disentangle the substantial additional tonnage which the organization has acquired in the process of nationalization presents a problem, but it is one that can be solved.

Whether he agree with all its provisions or not, every operator should support the R.H.A.'s plan. It represents a sincere attempt to unravel the knots which bind road transport, and the industry must present a united front to the Government in seeking its release from nationalization. Details can be hammered out during negotiation between the industry and the Government, but, for the sake of the speedy return of road transport to private enterprise, the broad principles upon which the R.H.A. has founded its plan must be accepted.