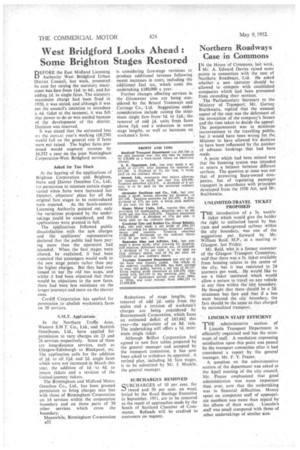 Page 34, 9th May 1952 — West Bridgford Looks Ahead Some Brighton Stages Restored
Close
Noticed an error?
If you've noticed an error in this article please click here to report it so we can fix it.
Keywords : Nottinghamshire, Rushcliffe, West Bridgford, Fare, Counties Of England, Public Transport, Nottingham Corporation Tramways, Business / Finance

BEFORE the East Midland Licensing Authority West Bridgford Urban District Council, last week, presented. its case for raising the statutory maxi-.. mum, bus fare from lid. to 4d., andfor adding id. to single fares. The statutory , maximum charge had. been fixed in 1920, it was stated, and although it was not the council's intention to introduce a 4d. ticket at the moment, it was felt that power to do so was needed because of the development of 'the district. Decision was reserved.

It was stated that the estimated loss On the curt tut year's working (£8,230) would fall 00 the general rate if fares were not raised. The higher fares propOsed would augment revenue by £6,552 a year on the joint Nottingham Corporation-West Bridgford services.

Asked for Too Much At the hearing of the applications of Brighton Corporation and Brighton, Hove and District Omnibus CO., Ltd., tor permission to reinstate certain stages %,aried when fares were increased last October, objectors' pleas for all the original fare stages to be reintroduced

were rejected. As the South-eastern Licensing Authority pointed out, only the variations proposed by the undertakings :could be considered, and the applications were granted in full.

The applications followed public dissatisfaction with the new charges• and the applicants' representative declared that the public had been paying more than the operators had intended. When the fare stages were' altered, he explained, if had been expected that passengers would walk to the new stage points rather than pay, the higher charges. But they had continued to 'use the old bus stops, and whilst it had been eXpected that there would be objections to the new fares,

Cardiff Corporation has applied for permission to abolish Workmen's fares

S.M.T. Appl,cations In the Northern Traffic Area, Western S.M T. Co., Ltd., and Scottish Omnibuses, Ltd., have applied forpermission to vary charges on 23 and 26 services respectively. Some of them are long-distance services, such as Glasgow-Edinburgh to Blackpool, etc: The application calls for the addition of id. to all lid and 2d. single fares which were not increased, in March this year, the addition of Id. to 4d, to return tickets and a revision of the limited-journey tickets.

The Birmingham and Midland Motor Omnibus Co., Ltd., has been granted permission to bring charges into line with those of Birmingham Corporation on 14 services within the corporation boundary and on those parts of 20 other services which cross the boundary.

is considering fare-stage revisions to produce additional revenue following recent increases in costs, including the additional fuel tax, which 'costs the undertaking £180,000 a. year.

Further changes affecting services in the Gloucester area are being considered by the Bristol Tramway's and CarriageCo.,•Ltd. Suggestions under consideration include raising the minimum single fare from Id. to lid.; theremoval of odd id. units from fares above 5id. and a reduction in some stage lengths, as well as increases on workmen's fares.

Reductions of stage lengths, the removal of odd id. units from the scales and a revision of workmen's charges are being considered by Bournemouth Corporation, which faces an estimated deficit of £63,662 this year—the equivalent of an 8d. "rate. The undertaking still offers a Id. minimum single ticket, Although Belfast Corporation had agreed to new fare tables prepared by the general manager and accepted by the transport committee, it has now been asked to withdraw its approval. A revised plan, including 3d. fare stages, is to be submitted by Mr. J. Mackie, the general manager.

SURCHARGES of 10 per cent. for tweed and 50 per cent, on wool, levied by the Road Haulage Executive in September, 1951, are to be removed as the result of approaches made by the South of Scotland Chamber of Commerce. Refunds will be credited to customers on request.