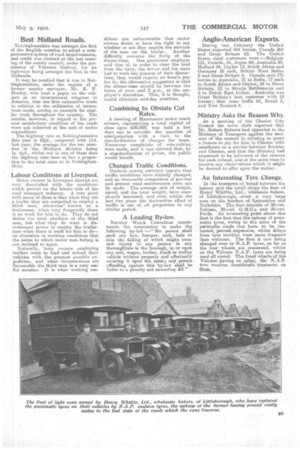 Page 5, 9th May 1922 — Best Midland Roads.
Close
Noticed an error?
If you've noticed an error in this article please click here to report it so we can fix it.
Keywords :

Nottinghamshire was amongst the first of the keiglieli counties toadopt a cornprehethsive system of road improvements, and credit was claimed at, the last meeting of the comety council, under the preeideney of Viscount Galway, for its highways being 'amongst the best in the Midlands. It may be recalled that it was in Nottinghamshire, under the -regime of a former county surveyor, Mr. E. E. Hooley, who read a paper on the subject at an international congress in America, that the first exhaustive trials in relation to the utilieation of tarmac were made, setting an example for similar work throughout the country. The results, however, in regard to the present satisfactory condition of the roads were not achieved at the cost of undue expenditure. The highway rate in Nottingliamehire this year is 101c1., compared with 11d. last year, the average for the ten counties in the Midland division being is.60., whilst not in one of them does the highway rate bear se low. a proportion to the total rates as in Nottinghamshire.