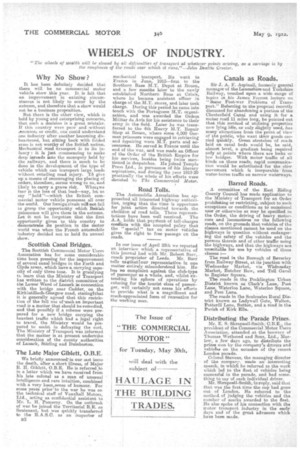 Page 4, 9th May 1922 — The Late Major Giblett, O.B.E.
Close
Noticed an error?
If you've noticed an error in this article please click here to report it so we can fix it.
Keywords : Jarmen, Vauxhall Motors

We briefly announced :in our mat issue the death, after a short illness, of Major R. H. Giblet, O.B.E. He is ref erred to in a letter which we have received from his late colonel as a man of unusual intelligence end rare intuition, combined with a very keenisense of humour. For some years prior to the war he was on the technical staff of Vauxhall Motors, Ltd., acting as confidential assistant to Mr, L. H. Pomeroy. On the outbreak of war he joined. the Territorial R.E. es Lieutenant, but was quickly tra,nsferrecl to the R.A.S.C. as an inspector of

mechanical transport.. He went to France in June, 191S—first to the Southern Base M.T. Depot at Rouen, and a. few months later to the newly established Northern Base at Calais, where lie became assistant officer in charge of the M.T. stores, and later took charge. During this period he came into touch with the Portuguese M.T. organization, and was awarded the Orclem Militar de Avis for his assistance to their army in the field. Later he was transferred to the 4th Heavy 111.'1'. Repair Shop at Rouen, where some 4,000 (Jarmen prisoners were engaged in retrieving

• commies. Be served in France until the end of tho war, and was made an Officer of the Order of the British Empire for his services, besides being twice mentioned in despatches. He joined Temple Press Ltd., in pursuance of his literary aspirations, and during the year 1919-20 practically the whole of his efforts were devoted to The Commercial Motor.