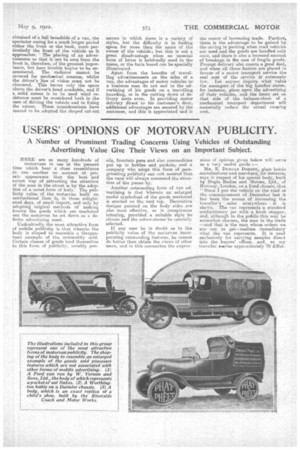 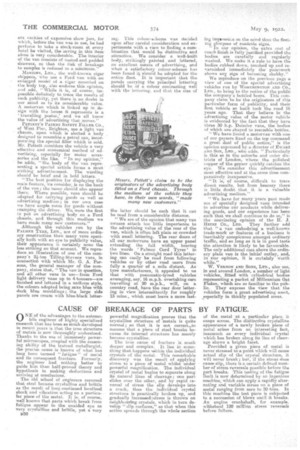 A Number of Prominent Trading Concerns• Using Vehicles of Outstanding Advertising Value Give Their Views on an Important Subject.

HERE are so many hundreds of motorvan s in use at the ppesent time which bear a close resemblance to one another on account of prosaic appearance that the best and surest war of attracting the attention of the man in the street is by the adoption of a novel form of body. The publicity value of the motorvan built on conventional lines is, in these enlightened days, of small import, and only by adopting original methods of making known the g-oods which are marketed can the motorvan be set down as a definite advertising asset Undoubtedly the most attractive form of mobile publicity is that wherein the body is shaped to resemble a Gargantuan example of the commodity sold. Certain classes of goods lend themselves to this form of publicity, notably pen

ells, fountain pens and also commodities put up in bottles and packets, and a company who adopt this form of peregrinating publicity can rat assured that the vans will always command the attention of tha passer-by.

Another outstanding form of van advertising is that Wherein an enlarged model symbolical of the goods marketed is erected on the roof top. Decorative designs painted on the body sides are also most effective, as is conspicuous lettering, provided a suitable style be chosen and the colour-shone be carefully selected.

If any user bein doubt as to the publicity value of the motorvan incor• porating outstanding features, he cannot do better than obtain the views of other users, and in this connection the expres

sions of opinion given below will serve as a very useful guide :—

MR. E. BuivcaN DottING, glass bottle manufacturer arid merchant, for instance, says in respect of his special body, built by Duple Bodies and Motors, Ltd., of rnsey, London, on a Ford chassis, that " Since I put the vehicle on the road at the commencement of December last it has been the means of increasing the

• traveller's sales everywhere it is shown. The van represents a standard confectionery jar with . a knob stopper, and, although to the public this may be somewhat obscure, the man in the trade --and that is the man whose orders we are out to get—realizes immediately what the van represents. It is used exclusively for carrying samples direct into the buyers' offices, and, as my traveller carries approximately 70 differ

ent varities of expensive show jars, for which, before the van was in use, he had perforce to take a stock-room at every hotel he visited, the saving in this Rene alone is very considerable, The interior of the van consists of nested and padded drawers, F..o that the risk of breakage to samples is reduced to a minimum."

MARTI/CS, LTD., the well-known cigar shippers, • who use a Ford vau with au enlarged model of a cigar mounted on the body top, also endorse this opinion, and add, " While it is, of course, impossible definitely to trace the results of such publicity, yet there is no doubt in our mind as to its considerable value. A motorvan which is linked up in design with the house it represents is a travelling imam.; and we all know the value of advertising that moves." PETTETT'S PATENT SAFETY FILLER CO., of West Pier, Brighton, use a light van chassis, upon which is elected a body designed to resemble a petrol can, incorporating the special filler which is sold. Mr. Pettett considers the vehicle a very effective and economical method of advertisiog, especially for motor accessories and the like. " fri my opinion," he adds, "the body of the van representing a special article forms a, most striking advertisement. The wording should be brief and in bold letters.

"The best position for displaying the main feature, we consider, is on the back of the van ; the name should also appear there. Where possible, vans should be adapted for carrying goods as well as advertising medium; in our own case we have ample room for goods without cramping the driver. WA were the first to put an advertising body on a Ford chassis, and through this medium we have made mane new customers,"

Although the vehicles run by the PALMER TYRE, lane are of more ordinary construction than many vans specially built with an eye to publicity value, their appearance is certainly none the less striking on that account. We reproduce an illustration of one of the company's 2i-ton Tilling-Stevens vans, in connection with which Mr. G. A.. Parsons, the general manager of the company, states that, "The van in question, and, all other vans in use—from Ford light delivery vans up to estonnere—are finished and lettered in a uniform style, the colours adopted being saxe blue with dark blue mouldings;. the large side panels are cream with blue-black letter

mg. This coluur-selleme was decided upon after careful consideration and experiments with a view to finding a combination that would be distinctive and ettraotive. We consider a well-built body, strikingly painted and lettered, an excellent means of advertising, and When a satisfactory colour-scheme has been found it should be adopted for the entire fleet. It is important that the panels carrying the principal lettering should be of a colour contrasting well with the lettering, and that the size ef the latter should be such that it can be read from a considerable distance.

"We are of the opinion that many van owners attach too little importance to the advertising value of the rear of the van, which is often left plain or crowded with small lettering. The rear doors of all our motorvans have an upper panel extending the full width, bearing the words 'Palmer Cord Tyres' in two lines. On a straight road this lettering can easily be read from following vehicles or 15y other reed users from fully a quarter of a mile distant. As tyre manufacturers, it appealed to us that with pneumatic-tyPed vehicles averaging, say, 16 m.p.h. overtaking cars travelling at 20 m.p.h., will, on a country road, have the rear door lettering in view intermittently for roughly 15 mins., which must leave a more last lug impesesicn on the mind than the fleeting glimpses of roadside signs.

" In our opinion, the extra cost of coach finish is fully justified provided the bodies are carefully and regularly washed. We make it a rule to have the bodies rubbed down, touched up and revarnished immediately the paintwork shows any sign of becoming shabby." We reproduce on the previous page a view of one of the special advertising vehicles run by WORTHINGTON AND CO., LTD., to bring to the notice of the public the company's bottled beers. This com pany claim to be the originators of this particular form of publicity, and their first vehicle so built took the road 16 years ago. That they believe in the advertising value of the motor vehicle is evidenced by the fact, that they have

three 30 h.p. Daimler vans, the bodies of which are shaped to resemble bottles. "We have found a motorvan with one of our geysers fixed on the top command a great deal of public notice," is the

opinion expressed by a director of Eweee AND SON, Lam., who adds. " Particularly is this so in the suburbs and outer dis tricts of London, where the polished copper of the geyser quickly catches the eye. We -consider this advertisement most effective and at the same time comparatively inexpensive. "It is, of course, difficult to trace direct results, but from hearsay there is little doubt that it is a valuable advertising medium."

"We have for many years past made use of specially designed vans intended to advertise our products while deliver ing goods, and our experience has been such that we shall continue to do so," is

the convincing opinion of the H. J. HEINZ CO., LTD. They further add that "a van embodying a well-known

trade-mark or features of a business is inevitably conspicuous amongst ordinary traffic, and so long as it is in good taste the attention is likely to be favourable The only additional cost above the ordinary, plain van is the initial outlay, ,and, in lour *pinion, it is certainly worth while."

W. VERNON AND SONS, LTD., also use, in and around London, a number of light

vehicles, fitted with cylindrical bodies representing a packet of Millennium Oat Flakes, which are RO familiar to the pub

lic. They express the view that the vehicles form a great advertising essete tespecially in thickly populated areas.