LIGHT VAN CHASSIS FOR COFFEE-STALL USE. 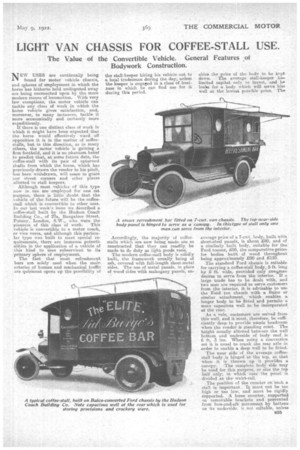 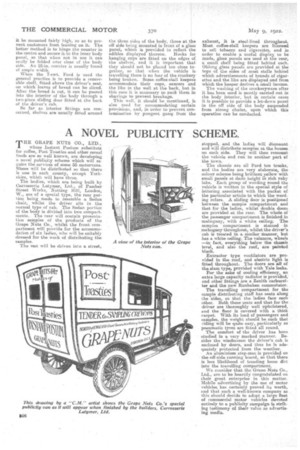 The Value of the Convertible Vehicle. General Features .of Bodywork Construction.

NEW USES are continually being found for motor vehicle chassis, and spheres of employment in which the horse has hitherto held undisputed sway are being encroached upon by the more modern means of locomotion. With very few exceptions, the motor vehicle can tackle any class of work in which the horse vehicle gives satisfaction, and, moreover, in many instances, tackle it inure economically and certainly more expeditiously.

If there is one distinct class of work in which it might have been expected that the horse would effectively ward off opposition it is in the matter of coffeestalls, but in this direction, as in many others, the motor vehicle is gaining a firm foothold, and it is no phantom belief to predict that, at some future date, the coffee-stall with its pair of upturned shafts from which the horse, which has previously drawn the vendor to his pitch, has been withdrawn, will cease to grace our street corners and other places allotted to stall keepers.

Although must vehicles of this type now in use are employed for one set purpose, there is little doubt that the vehicle of the future will he the coffeestall which is convertible to other uses. In our last week's issue we described a coffee-stall built by the Hudson Coach Building Co., of 27a, Bangalore Street, Putney, London, S.W., who were the

pioneers of this class of work. This vehicle is convertible to a motor coach, or vice versa, and although this Particular type was built to meet special requirements, there are immense potentialities in the application of a vehicle of this kind to uses subservient to its primary sphere of employment_ The fact that most refreshment bars are solely used when the main arteries of human and mechanical traffic are quiescent opens up the possibility of

the stall-keeper hiring his vehicle out to a local tradesman during the day, unless the keeper is engaged in a class of business in which he can find use for it. during this period.

shies the price of the body to be kept down. The average stall-keeper halimited capital. only to invest, and tool's for a body which will serve him well at the lowest possible price. The Accordingly, the majority of coffeestalls which are now being made. are so constructed that they can readily be made to do duty as light goods vans.

The modern coffee-stall body is solidly built, the framework usually being of ash, covered with full-length sheet-metal sides. The use of metal panels, in place of wood ,ides with mahogany panels, en

average price of a 7-cwt, body, built with sheetsteel panels, is about £80, and of a similarly built body, suitable for the Ford tonner, 005, the comparative prices for bodies built of wood throughout being approximately £90 and £110.

The standard Ford chassis is suitable for carrying a coffee-stall body, 5 ft. long by 5 ft. wide, provided only ones,man desires to serve from the interior. If a large trade has to be dealt, with, and two men are required to serve customers from the interior, it is advisable to use the Ford ton chassis with a Baia) or similar attachment, which enables a longer body to be fitted and permits a more capacious well to be incorporated_ at the rear.

As a rule, customers are served from this well and it must., therefore, be sufficiently deep to provide ample headroom when the vendor is standing erect. The height usually allowed between the well bottom and underside of body roof is 6 ft. 5 ins. When using a, conversion set, it is usual to crank the rear axle in order to enable a deep well to be fitted.

The near side of the average coffeestall body ,is hinged at the top, so that when it is thrown up it provides a canopy. The complete body side may be used for this purpose, or else the top half only, in which case the panel is divided at the waist-rail,

The position of the counter on such a stall is important. It. must not be too high or too low, and must be rigidly supported. A loose counter, supported on removable brackets and prevented from fore-and-aft movement by battens on its underside, is not suitable, unless it be mounted fairly high, so as to prevent customers from leaning on it. The better method is to hinge the counter in the centre and secure it to the inner body panel, so that when not in use it can easily be folded over clear of the body side. An 18-in, counter is usually found of ample width.

When the 7-cwt. Ford is used the general practice is to provide a removable shelf, fitted above the driver's seat, on which loaves of bread can be sliced. After the bread is cut, it can be passed into the interior of the body through a two-piece sliding door fitted at the back of the driver's cab.

SO far as interior fittings are concerned, shelves are usually fitted around the three sides of the body, those at tie oft side being mounted in front of a glass panel, which is provided to reflect the edibles displayed thereon. Hooks for hanging cups are fitted on the edges of the shelves, and it is important that they should not be placed too close together, so that when the vehicle is travelling there is no fear of the crockery being broken. Some coffee-stall keepers accommodate their cups, saucers and the like in the well at the back, but in this ease it is necessary to pack them in shavings to prevent breakage.

This well, it should be mentioned, ia also used for accommodating certain provisions, and, in order to prevent contamination by pungent gaseS from the

exhaust, it is steel-lined throughout. Moat, coffee-stall keepers are licensed to sell tobacco and cigarettes, and in order to enable a useful display to be made, glass panels are used at the rear, a small shelf being fitted behind each. Oblong glass panels are provided at the tops of the sides of most stalls behind which advertisements of brands of cigarettes and the like are displayed and from which the keeper derives a small income.

The washing of the ca•ockeryware after it has been used is mostly carried out in the body interior, but in certain cases it is possible to provide a let-down panel in the off side of tho body suspended from strong chains, upon which this operation can be conducted.