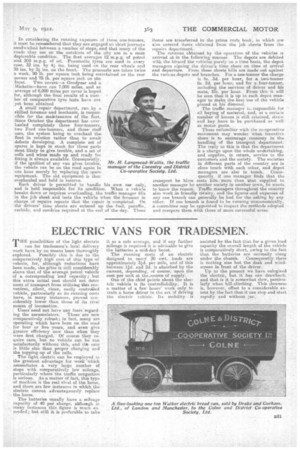 Page 23, 9th May 1922 — ELECTRIC VANS FOR TRADESMEN.
Close
Noticed an error?
If you've noticed an error in this article please click here to report it so we can fix it.

explored. _Possibly this is due to the comparatively high cost of this type of vehicle, for, although reductions have been made, the pike is still considerably above that of the average petrol vehicle of a. corresponding load capacity; but this extra initial cost should not deter users of transport from utilizing this convenient, silent, clean, easily controlled vehicle, particularly as its running costs have, in many instances, proved considerably lower than those of its rival means of locomotion. • Users need not have any fears regarding the accumulators. These are now comparatively robust; in fact, many are operating which have been on the road for four or five years, and even give greater efficiency now than when they were first, charged. Of course they require care, hut no vehicle can be run satisfactorily without, this, and ti t enre is little else than proper charging and the topping-up of the cells. The light electric can be employed to the greatest advantage for work which aecessitates a very large number of stops with comparatively low mileage, particularly where the traffic congestion' is serious. As a matter of fact, this type of machine is the real rival of the horse, and there are few instances in which the electric cannot advantageously replace the horse.

The batteries usually have a mileage rapacity of 40 per charge, although in many Instances this figure is mach exceeded; but still it is preferable to take it as a safe average, and if any further mileage is required it is advisable to give the batteries a mid-day boost.

The running costa of an electric designed to CEIrry'30 cwt, loads are approximately 31d. per mile, and of this between ld. and 2d. is absorbed by the current, depending, of course, upon the cost per unit at the,source of supply.

One of the chief points about the electric vehicle is its controllability. It is a matter of a few hours' work only to train a horse driver in the art of driving the electrie vehicle. Its mobility is

assisted by the fact that. for a given, load capacity the overall length of the vehicle is comparatively short, owing to the fact that the batteries are normally slung under the chassis. Consequently there is nothing else but the' dash and windscreen in front of the driver.

Up to the present we have eulogized the electric, but it has one drawback, and that is it is somewhat slow, particularly when hill-climbing. This slowness is, however, offset to a considerable extent by the fact. that it can stop and start rapidly and without ;an