The Van as a Creator of Demand. 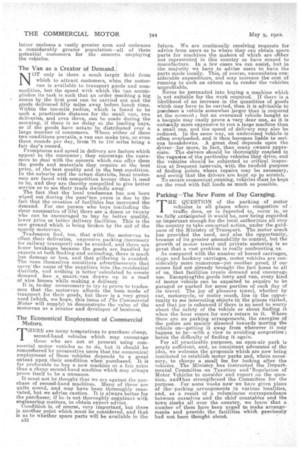 Page 2, 9th May 1922 — The Van as a Creator of Demand.
Close
Noticed an error?
If you've noticed an error in this article please click here to report it so we can fix it.

NOT only is there a much larger field from which to attract customers, when the motorvan is available to transport g ods and commodities, but the speed with which t plishes its task is such that an order e van accom°aching a, big out and the , stores by the first post can be came goods delivered fifty miles away before lunch time. Within the ten-mile radius, which is found to be such a practicable distance for the small van, two deliveries, and even three, can be made during the morning, if there is no delay at the loading bays, or if the goods have not4to be distributed over a large number of consumers. Where either of these two conditions prevails' a van can make two, or even three rounds per day, from 75 to 110 miles being a fair day's record.

Promptness and speed in delivery are factors which appeal to the consumer; they encourage the customers to deal with the concern which can offer them the goods and materials they require at the best i price, of the best quality and n the best condition. In the suburlae and the urban districts, ocal tradesmen are faced with competition keener' than it used to be, and they are thereby compelled to give better service or to see their trade dwindle away.

The fact that the local tradesman has not been wiped out during the pastIten years is due to the fact that the creation of facilities has increased the demand. For one person who buys (excluding the sheer necessaries of life) there are a dozen or twenty who can be encouraged to buy by better quality, lower price or better delivery facilities. This is the new ground which is being broken by the aid of the speedy motorvan. Tradesmen find, too, that with the rnotorvan to effect their deliveries, expensive packing (necessary for railway transport.) can be avoided, and there are fewer breakages because the goods are, handled by experts at both lbading and unloading, there is much less damage or loss, and that pilfering is avoided. The vans themselves constitute advertisements that carry' the name of 'the suppliers into the,residential districts, end nothing is better-calculated to create demand ban a srnart..van drawn up in a road of nice houses 'while making a delivery. , It is, to-day unnecessary to try to prove to tradesmen that the. rnotorvan afforda the best mode of transport for their goods i but there is a very great need (which, we hope, this issue of Mc Commercial Motor will supply) to demonstrate. the value of the rnotorvan as a creator and developer of business.