THE LIGHT VAN FOR THE HAULIER. 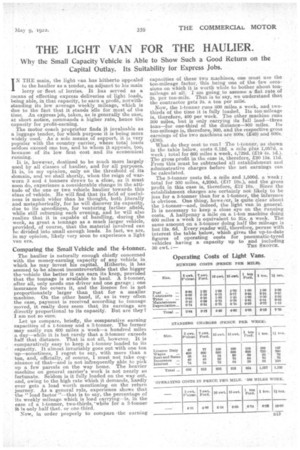 Page 17, 9th May 1922 — THE LIGHT VAN FOR THE HAULIER.
Close
Noticed an error?
If you've noticed an error in this article please click here to report it so we can fix it.

Why the Small Capacity Vehicle is Able to Show Such a Good Return on the Capital Outlay. Its Suitability for Express Jobs.

N THE main the light van has hitherto appealed to the haulier as a tender, an adjunct to his main lorry or fleet of lorries. It has served as a means of effecting express deliveries of light loads, being able, in that capacity, to earn a profit, notwithstanding its low average weekly mileage, which is due to the fact that it stands idle for most of the time. An express iob, taken, as is generally the case, at short notice, commands a higher rate, hence the capacity for profit-earning.

The motor coach proprietor finds it invaluable as a luggage tender, for which purpose itis being more widely used. As a sole means of support, it is very popular with the country carrier, where total loads seldom exceed one ton, and to whom it appeals, too, because of its low lust cost and its economical running.

It is, however, destined to be much more largely used by all classes of haulier, and for all purposes. It is, in my opinion, only on the threshold of. its domain, and we shall shortly, when the reign of warworn 3 and 4 thrillers draws to a close, as it must soon do, experience a considerable change in the attitude of the one or two vehicle haulier towards this class of vehicle. He will find that its field of usefulness is much wider than he thought, both literally and metaphorically, for he will discover its capacity, due to its speediness, for venturing farther atiekl, while still returning each evening, and he will also realize that it is capable of handling, during the week, as great a tonnage as a much larger vehicle, provided, of course, that the material involved can be divided into small enough loads. In fact, we are, in my opinion, likely very soon to experience a light van era.

Comparing the Small Vehicle and the 4-tonner.

The haulier is naturally enough chiefly concerned with the money-earning capacity of any vehicle in which he may invest his capital. Hitherto, it has seemed to be almost incontrovertible that the bigger the -vehicle the better it can earn its keep, provided that the tonnage is available to haul. A 5-tonner, after all, only needs one driver and one garage ; one insurance fee covers it, and the licence fee is not proportionately larger than that for a smaller machine. On the other hand, if, as is very often the case, payment is received according to tonnage moved, it really does seem that its earnings are directly proportional to its capacity. But are they? I am not so sure.

Let us compare, briefly, the comparative earning capacities of a 1-tonner and a 3-tonner. The former may easily run 600 miles a week—a hundred miles a day—while it is but rarely that a 3-tonner exceeds half that distance. That is not all, however. It is comparatively easy to keep a 1-tonner loaded to its capacity. It almost invariably goes out with one ton up—sometimes, I regret to say, with more than a ton, and, officially, of course, I must not take cognizance of that—and is not infrequently able to pick up a few parcels on the way borne. The heavier machine on general carrier's work is not nearly so fortunate. Seklom is it fully loaded on the way out, and, owing to the high rate which it demands, hardly ever gets a load worth mentioning on the return journey. As a general rule, experience shows that the "load factor '—that is to say, the percentage of its weekly mileage which is load carrying—is, in the case of a 1-tonner, two-thirds, "while for a 3-tonner it is only half that, or one-third.

Now, in order properly to compare the earning

capacities of these two machines, one must use the ton-mileage factor, this being one of the few occasions on which it is worth while to bother about tonmileage at all. 1 am going to assume a flat rate of 2s. per ton-mile. That is to say, we understand that the contractor gets 2s. a ton per mile.

The 3-tonner costs 9d. a mile and 1,500d. a week ; total for 300 miles, 4,200d. (R17 10s.), and the gross profit in this case is, therefore, £12 10s. Since the establishment charges are certainly not likely to be less for a 3-tonner than for a 1-tonner, the inference is obvious. One thing, however, is quite clear about the 1-tonner—and, indeed, the light van in general. It is necessary to keep a close eye on the running costs. A halfpenny a mile on a 1-ton machine doing 600 miles a week is equivalent to 25s. a week. The same amount on a 3-tonner doing half the mileage is but 12s. 6d. Every reader will, therefore, peruse with interest the table below, which gives the up-to-date figures of operating costs for pneumatic-tyred vehicles having a capacity up to and including