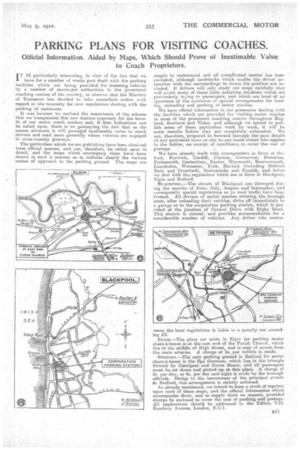 Page 13, 9th May 1922 — PARKING PLANS FOR VISITING COACHES.
Close
Noticed an error?
If you've noticed an error in this article please click here to report it so we can fix it.

Official Information. Aided by Maps, Which Should Prove of Inestimable Value to Coach Proprietors.

I T IS particularly interesting, in view of the fact that we

have for a number of weeks past dealt with the parking facilities which are being provided for incoming vehicles 'by a number of anunic‘pal authorities in the prominent coaching centres of the country, to observe that the Ministry of Transport has decided to take immediate, action with regarrl.to the necessity for new regulations dealing with the parking of motorcars.

It was because we realized the importance of the scheme that we inaugurated this new feature expressly for the benefit of our motor coach readers and, if first indications can he relied upon, there is no gainsaying the fact that se the season advances it will provetof inestimable value to coach drivers and road users generally whose vehiclesareengaged in cross-country journeys.

The particulars whiela we are publishing have been obtained from official sources, and can, therefore, be relied upon in detail, and the maps which 'accompany them have been drawn in such a manner as to indicate clearly the various routes of approach to the parking ground. The maps are

simple to understand and all complicated matter has been excluded, although landmarks which enable the driver unfamiliar with the surroundings to locate his position are ineluded. If drivers will only study our maps carefully they will avoid many of these little irritating incidents which are particularly trying to passengers, and which are bred of an igaorance of the existence of special arrangements for loading, unloading and parking of motor coaches.

We have official information in our possession dealing with the facilities which are provided for visiting motor vouches in most of the prominent coaching centres throughout England, Scotland and Wales, and although we intend to publish some of these particulars week by week, it will be some months before they are completely exhausted. We are, therefore, prepared to forward through the postdetails of any partionlar town or city to aay'coaoli owner who applies to the Editor, on receipt of remittance to cover the cost of postage.

We have already dealt with arrangements in force at Oxford, Norwich, Cardiff, Clacton, Carnarvon, Penzance, Portsmouth, Canterbury, Exeter, Weymouth, Bournemouth, Llandudno, Worcester, York; Matlock (ineluding Matloelc Bath and Cromford), Basingstoke and Penrith, and below wn deal with the regulations which are in force in Blackpool, Elgin and Betford. ,Er.Acennor--The streets of Blackpool are thronged during the mouths of June,. July, August and September, and consequently special regulationsas to road traffic have been framed. All drivers of motor coaches entering the borough must, after unloading their vehicles, drive off immediately to a garage or to the corporation parking station, which is provided at the junction of Central Drive with Rigby 'Board. This station is central, and provides accommodation for a considerable number of vehicles. Any driver who contra

vanes the local regulations is liable to a penalty not exceeding £5.

Ern/v.—The place set aside in Elgin for parking motorchars-a-hancs is at the east end of the Parish Church, which lies in tho middle of. High Street, and is &Easy of access, from the..nrain arteries. A charge of Is. per vehicle is made.

RaTenen.—The only parking ground in Bedard for motor chars-&-bancs is the Spa Common, which lies in the triangle formed. by Carelgate and Gros Street, and all passengers must be set down: and' picked up at this place. A charge of 2s. per day, or 4S per day and. night is snide by the borough officials. 0-wing to the narrowness of the principal streets in Retford, -this arrangement is strictly enforced. As already mentioned, we intend to keep a stock of reprints upon card ofthese maps, and the official information which accompanies thorn, and to supply them on request, provided stamps be enclosed to cover the cost of packing and postage. All applications should be addressedto the Editor, 7-15. Bosebery Avenue, London, ROL