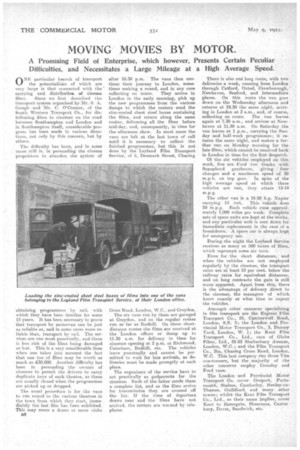 Page 10, 9th May 1922 — MOVING MOVIES BY MOTOR.
Close
Noticed an error?
If you've noticed an error in this article please click here to report it so we can fix it.
Keywords : London, London Borough Of Croydon, Croydon, Van, Entertainment / Culture

A Promising Field of Enterprise, which however, Presents Certain Peculiar Difficulties, and Necessitates a Large Mileage at a High Average Speed.

ONE particular byanch of transport the potentialities of which are very large is that connected with the carrying and. distributioa of cinema

films. Since we first described the transport system organized by Mr. S. A. Gough and Mr. C. O'Connor, of the South Western Transport Co., for distributing films to cinemas on the road between Southampton and London and in Southampton itself, considerable progress has been made in various directions, not only by this concern, but by others.

The difficulty has been, and in some cases still is, in persuading the cinema proprietors to abandon the system of obtaining programmes by rail, with which they have been familiar for some 15 years. It has been necessary to prove that transport by motorvan can be just as reliable as, and in some cases more reliable than, transport by rail. The services are run most punctually, and there is less risk of the films being damaged or lost. This is a very considerable item when one takes into account the fact that one ton of films may he worth as much as £30,000. Another difficulty has been in persuading the owners of cinemas to permit the drivers to carry duplicate keys of each theatre, as these are usually closed when the programmes are picked up or dropped.

The usual procedure is for the vans to run round to the various theatres in the town from which they start, immediately the last film has been exhibited.

• This may mean a dozen or more visits after 10.30 p.m. The vans then continue their journey to London, sometimes making a round, and in any case collecting en route. They arrive in London in the early morning, pick up the new programmes from the various dumps to which the renters send the zinc-coated sheet steel boxes containing the films, and return gong the same routes, delivering all the films before mid-day, and, consequently, in time for theafternoon show. In most cases the vans are left at the last town of call until it is necessary to collect the finished programmes, but this is not clone by the Leyland Film Transport Service, of 5. Denmark Street, Charing Cross Road, London, W.C., and Croydon.

The six vans run by them are garaged at Croydon, and on the regular routes run as far as Recihill. On these shortdistance routes the films are received at the London offices or dump up to 11.30 a.m, for delivery in time for cinemas opening at 2 p.m. at Richmond, Caterham, Redhifi, etc. The vehicles leave punctually and cannot be permitted to wait for late arrivals, as deliveries must be made promptly at each place.

The organizers of the service have to act practically as godparents for the cinemas. Each of the latter sends them a complete list, and as the films arrive for transmission they are crossed off the list. If the time of departure draws near and the films have not arrived, the renters are warned by tale-' phone. There is also one long route, with two deliveries a week, running from London • through Catforcl, Oxted, Crowborough, Newhaven, Seaford, and intermediate places. On this route the van goes down on the Wednesday afternoon and returns at 10.30 the same night, arriving in London at 3 a.m., and, of course, collecting en route. The van leaves again at 7.30 a.m., and arrives at Newhaven at 11.30 a.m. On Saturday the van leaves at 1 p.m., carrying the Sun day and half-week programmes; it returns the same night, and makes a further ran on Monday morning for the late films, which cannot be received back in London in time for the first despatch.

Of the six vehicles employed on this work, five are Ford ton trucks with Supaphord gearboxes; giving four changes and a maximum speed of 30 m.p.h. on top gear. In spite of the high average speed at which these vehicles are run, they attain 13-14 m.p.g.

The other van is a 16-20 h.p. Napier carrying 15 cwt. This vehicle does 20 m.p.g. Each vehicle runs approximately 1,000 miles per week. Complete sets of spare units are kept at the works, and any particular unit is sent down for immediate replacement in the case of a breakdown. A spare car is always kept fc& emergency use.

During.the night the Leyland Service receives as many as 500 boxes of films, which represent, some six tons.

Even for the short distances, and when the vehicles are not employed regularly by the cinemas, the transport rates are at least 10 per cent, below the railway rates for equivalent distances, and on long contracts the gain is still more apparent. Apart from this, there is the advantage of delivery direct to the cinemas; the managers of which know exactly at what time to expect the vehicles.