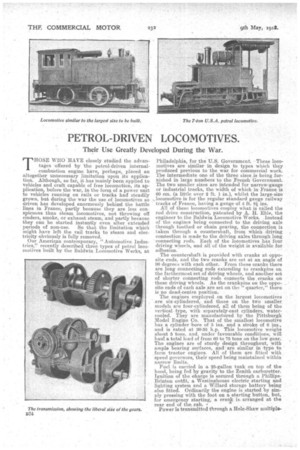 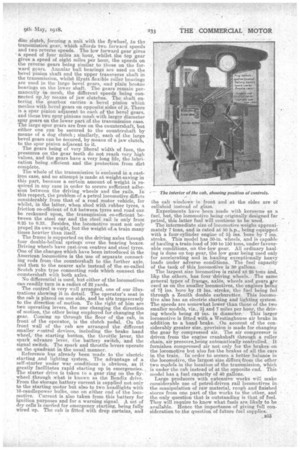 Their Use Greatly Developed During the War.

THOSE WHO HAVE closely studied the advantages offered by 'the petrol-driven internalcombustion engine have, perhaps, placed an altogether unnecessary limitation upon its application. Although, so far, it has mainly been applied to vehicles and craft capable of free locomotion, its application, before the war, in the form of a power unit to vehicles running on rails or tracks had steadily grown, but during the war the use of locomotives so driven has developed enormously behind the battle lines in France, partly because they are less conspicuous than steam locomotives, not throwing off cinders, smoke, or exhaust steam, and partly because they can be started instantly even after extended periods of non-use. So that the limitation which might have left the rail tracks to steam and electricity obviously is fully removed.

Our American contemporary, " Automotive Industries,'.' recently described three types of petrol locomotives built by the Baldwin Locomotive Werks, at Philadelphia, for the U.S. Government. These loco motives are similar in design to types which they produced previous to the war for commercial work. The intermediate one of the three sizes is 'being fur nished in large numbers to the French Government.

The two smaller sizes are intended for narrow-gauge or industrial tracks, the width of which in France iS 60 cm. (a little over 2 ft. 1 in.), whilst the large-size locomotive is for the regular standard gauge railway • tracks of France, having a gauge of 4 ft. 8ins; All of these locomotives employ what is called the rod drive construction, patented by A. H. Ehle, the engineer to the Baldwin Locomotive Works. Instead of the engines being connected to • the driving axle through toothed or chain gearing, the connection is taken through a countershaft, from Which driving cormection is made to the driving axles through long connecting rods. Each of the locomotives has four driving wheels, and all of the weight is available for adhesion.

The countershaft is provided with cranks at opposite ends, and the two cranks are set at an angle of

00 degrees with each other. From these cranks there

are long connecting rods extending to crankpins on the farthermost•set of driving wheels, and another set

of shorter connecting rods ,eonnects the cranks on these driving wheels. As the crankpins on the opposite ends of each axle are set on the " quarter," there is no dead-centre position.

The engines employed . on the largest locomotives . are six-cylindered, and those on the two smaller. models are four-cylindered, all of them being of the

vertical type, with separately-cast cylinders, watercooled. They are manufactured by the Pittsburgh. Model Engine Go. That of the smallest lo-comotive has a cylinder boi,e of 5 ins, and a stroke of 6 ins., and is rated at 30-35 h.p. This locomotive weighs about 5 tons, and, under favourable conditions, will haul a total load of from 60 to 75 tons on the IoW gear. The engines are of sturdy design throughout, with ample bearing surfaces, and are similar in type to • .farm tractor engines. All of 'them are fitted with• speed governors, their speed being maintained within narrow limits.

Fuel is carried in a, 25-gallon tank on top of the .hood, being fed by gravity to the Zenith carburetter.

Ignition of the charge is secured through a PhillipsBrinton outfit, a Westinghouse electric starting and lighting system and a Willard storage battery being also fitted. Ordinarily the engine is started by simply pressing with the foot on a starting button, but, for emergency starting, a crank is> arranged at the rear end of the, cab. 0 Power is transmitted through a Hele-Shaw

disc clutch, forming a unit with the flywheel, .to the transmission. gear, which affords two forward speeds and two reverse speeds. The low forward gear gives a speed of four miks an hour, whilst the top gear gives a speed of eight miles per hour, the speeds on the reverse gears being similar to those on the forward gears. Annular ball bearings are used on the bevel pinion shaft and the upper transverse shaft in the transmission, whilst Hyatt flexible roller bearings are used in the large bevel gears, and plain brohze bearings on the lower shaft. The gears remain permanently in mesh, the different 'speeds being connected up ,by means of jaw clutches. The shaft entering the gearbox carries a bevel pinion which meshes with bevel gears on opposite sides of it. There is a spur pinion adjacent to each of the bevel gears, and these two spur pinions mesh with larger diameter spur gears on the lower part of the transmission cake. The large spur gears are free on the countershaft, but either one canbe secured to the countdrshaft by means of a 'clog clutch ; similarly, each of the large bevel gears can be Secured, by means of a jaw clutch, to the spur pinion adjacent to it.

The gears being of very liberal width of face, the pressures on the gear teeth do not reach very high values, and the gears have a very long life, the lubrication being efficient and the protection from dirt complete.

The whole of the transmission is enclosed in a castiron case, and no attempt is made at weight-saving in this part, because a certain amount ofweight is required in any 'case in order to secure sufficient adhesion between the driving wheels and the rails. In this respect, the problem of a petrol locomotive differs considerably from that of a road motor vehicle, for whilst, in the latter, when shod with rubber tyres, a friction co-officient of 0.6 between tyres and road can be reckoned upon, the transmission. co-efficient between the steel car and the steel rail is only from 0.25 to 0.33. Besides, the locomotive must not only propel its own weight, but the weight of:a train many times heavier than itself.

The frame is supported on the driving axles through four double-helical springs over the bearing boxes. Driving wheels have cast-iron centres and steel tyres. One of the changes which have been introduced in the American locomotive is the use of separate connecting rods from the countershaft to the further axle, and then to the nearer axle instead of the so-called Scotch yoke type connecting rods which connect the countershaft with both axles.

No differential is used, but either of the locomotives can readily turn in a radius of 22 yards. The control is very well arranged, one of our illustrations showing it in detail. The operator's seat in the cab is placed on one side, and he sits transversely to the direction of motion. To the right of him are two operating levers, the one changing the direction of motion, the other being employed for changing the gear. Coming up through the floor of the cab, in front of the operator, is the clutch pedal. On the front wall of the cab are arranged the different smaller P .InttoI devices, including the brake hand wheel, the starting button, the throttle lever, the spark advance lever, the battery switch, and the signal switch. The spark and throttle levers operate on the quadrant in the usual manner. Reference has already been made to the electric starting and lighting system. The advantage of a self-starter under war conditions is obvious, as it greatly facilitates rapid starting up in emergencies. The starter drive is taken to a gear ring on the flywheel through _what is known as the Bendix drive. From the storage battery current is supplied not only to the starting motor but also-to two headlights with 16-candlepower bulbs, one on either end of the locomotive. Current is also taken from this battery for ignition purposes and for -a warning signal. A set of dry cells is carried for emergency starting, being fully wired up. The cab is fitted with drop curtains, and

the cab windows in front and at the sides are of celluloid instead of glass. Experiments have been made with kerosene as a fuel, but, the locomotive being originally designed for petrol, this latter fuel will continue to be used.

The intermediate size of locomotive weighs approximately 7 tons, and is rated at 50 h.p., being equipped with a four-cylinder engine of 5.1i ins, bore by 7 ins. stroke. This model has 30-in, wheels, and is capable of hauling a train-load of 100 to 150 tons, Under favourable conditions, on the low gear. All ordinary hauling is done on top gear, the low gear being used only for accelerating and in hauling exceptionally -heavy loads under adverse conditions. The fuel capacity of the tank of this locomotive is 30 gallons.

The largest size locomotive is rated at 25 tons and, likp the others, has four 'driving wheels. The same

general types of frames, axles, wheels and gears *reused as on the snialleriocomotives, the engines being of 7f ins, bore by -12 ins. stroke, the fuel being fed through a Zenith double carburetter. This locomotive also has an electric starting and lighting system. The speeds are somewhat lower than those of the two smaller models, viz., 31and 7 miles per hour, the driving wheels being 42 ins, in diameter. This larger locomotive is fitted with a Westinghouse air brake in addition to a hand brake. On account of the considerably greater size, -provision is made for changing the gear by compressed air. The air compressor is driven from the engine crankshaft through a roller chain, air pressure...being automatically controlled. It furnishes compressed air not only for the brakes on the locomotive but also for. the brakes of all the cars in the train. In order to secure a better balance in the locomotive, the largest size differeefroin the other two medels in the locatien of the transmission which is under -the cab instead of at the opposite end. This model has a fuel capacity of 40 gallons. Large producers with extensive work S will make considerable use of petrol-driven rail locomotives in the manipulation of raw material, rough and finished stores from one part of the works to the other, and the only question that is outstanding is that of fuel. They will require to know what fuels are likely to be available. Hence the importance of giving full consideration to the question of future fuel supplies.