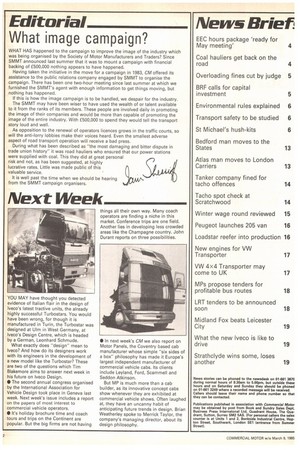 Page 4, 9th March 1985 — Next Week
Close
Noticed an error?
If you've noticed an error in this article please click here to report it so we can fix it.
Keywords : Trucks, Road Transport, Iveco, Fiat, Leyland Motors, Seddon Atkinson, Turbostar, Scammell

YOU MAY have thought you detected evidence of Italian flair in the design of lveco's latest tractive units, the already highly successful Turbostars. You would have been wrong, for though it is manufactured in Turin, the Turbostar was designed at Ulm in West Germany, at Iveco's Design Centre, which is headed by a German, Leonhard Schmude.

What exactly does "design" mean to Iveco? And how do its designers work with its engineers in the development of a new model like the Turbostar? These are two of the questions which Tim Blakemore aims to answer next week in his future on Iveco Design.

• The second annual congress organised by the International Association for Vehicle Design took place in Geneva last week. Next week's issue includes a report on the papers of most interest to commercial vehicle operators.

• It's holiday brochure time and coach tours and trips on the Continent are popular. But the big firms are not having things all their own way. Many coach operators are finding a niche in this market. Conference trips are one field. Another lies in developing less crowded areas like the Champagne country. John Durant reports on three possibilities.

• In next week's CM we also report on Motor Panels, the Coventry based cab manufacturer whose simple "six sides of a box" philosophy has made it Europe's largest independent manufacturer of commercial vehicle cabs. Its clients include Leyland, Ford, Scammell and Seddon Atkinson,

But MP is much more than a cab builder, as its innovative concept cabs show whenever they are exhibited at commercial vehicle shows. Often laughed at, they have an uncanny habit of anticipating future trends in design. Brian Weatherley spoke to Merrick Taylor, the company's managing director, about its design philosophy.