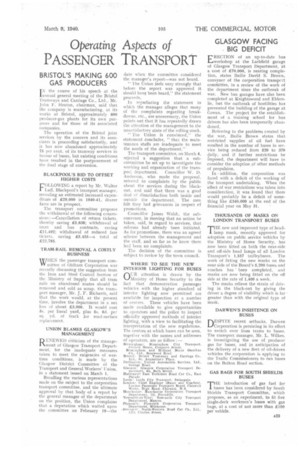 Page 35, 9th March 1940 — Operating Aspects of PASSENGER TRANSPORT
Close
Noticed an error?
If you've noticed an error in this article please click here to report it so we can fix it.
Keywords : Passenger Transport, Transport In Mumbai, Transport In India, Transport, Brihanmumbai Electric Supply And Transport, Nottingham And District Tramways Company Limited

IN the course of his speech at the Iannual general meeting of the Bristol Tramways and Carriage Co., Ltd., Mr. John F. Heaton, chairman, said that the company is manufacturing, at its works at Bristol, approximately 600 producer-gas plants for its own purposes and for those of its associated companies.

The operation of the Bristol joint services by the concern and its associates is proceeding satisfactorily, and it has now abandoned approximately 75 per cent. of its tramway services in favour of buses, but existing conditions have resulted in the postponement of the final stage of conversion.

TRAM-RAIL REMOVAL A COSTLY BUSINESS 'WHEN the passenger transport cornVV mittee of Oldham Corporation was recently discussing the suggestion from the Iron and Steel Control Section of the Ministry of Supply that all tram rails on abandoned routes should be removed and sold as scrap, the transport manager, Mr. J. F. Richards, said that the work would, at the present time, involve the department in a net loss of about £3,000. It would cost 5s. per lineal yard, plus 5s. 6d. per sq, yd. of track for road-surface replacement.

RENEWED criticism of the management of Glasgow Transport Department, for the inadequate measures taken to meet the exigencies of wartime conditions, is made by the Glasgow District Committee of the Transport and General Workers' Union, in a statement issued on March 1.

Recalling the Various representations made on the subject to the corporation transport committee, and the ultimate approval by that body of a report by the general manager of the department on the position, the Union complains that a deputation which waited upon the committee on February 19—the date when the committee considered the manager's report—was not heard_ " The Union feels very strongly that before the report was approved it should have been heard," the statement proceeds.

In repudiating the statement in which the manager alleges that many of the complaints regarding breakdowns, etc., are unnecessary, the Union points out that it has repeatedly drawn the attention of the management to the unsatisfactory state of the rolling stock.

" The Union is convinced," the statement Concludes, "that the maintenance staffs are inadequate to meet the needs of the department."

The transport committee, on March 4, rejected a suggestion that a subcommittee be set up to investigate the working and organization of the trans poi t department. Councillor W. D. Anderson, who made the proposal, referred to complaints by the public about the services during the blackout, and said that there was a good deal of dissatisfaction both inside and outside the department. The men felt they had grievances in respect ef promotions.

Councillor James Welsh, the subconvener, in moving that no action be taken, said, in regard to services, that reforms had already been initiated. As for promotions, there was an agreed scheme between the management and the staff, and so far as he knew there had been no complaints.

The decision of the committee is subject to review by the town council.

WHERE TO SEE THE NEW INTERIOR LIGHTING FOR BUSES n1.7R attention is drawn by the ‘-/Ministry of Home Security to the fact that demonstration passenger vehicles with the higher standard of interior lighting now permitted are available for inspection at a number of centres. These vehicles have been made available to give opportunities to operators and the police to inspect officially approved methods of interior lighting, with a view to facilitating the interpretation of the new regulations. The centres at which buses can he seen, together with the names and addresses of operators, are as follow :— Bismisgham: Birmingham City Transport. Conned House, Congreve Street. Birmingham and Mtdiand Motor Omnibus Co.. ltd., Bearwood Road:

L./ RECTION of an up-to-date bus workshop at the Larkfield garage of Glasgow Transport Department, at a cost of £70,000, is nearing completion, states Bailie David S. Brown, convener of the corporation transport committee, in a review of the work of the department since the outbreak of war, New bus garages have also been completed at Knightswood and Elderslie, but the outbreak of hostilities has prevented the building of the garage at Govan. The project for the establishment of a training school for bus drivers has also been temporarily abandoned, Referring to the problems created by the war, Bailie Brown states that restricted supplies of oil fuel have resulted in the number of buses in service being reduced from 520 to 370 daily, and if further restrictions be imposed, the department will have to consider the adoption of other methods of propulsion.

In addition, the corporation was faced with a deficit of the working of the transport undertaking. When the effect of war restrictions was taken into consideration, it was found that there would probably be a deficit of something like £340,000 at the end of the financial year on May 31.

THE new and improved type of headlamp mask, recently approved for adoption on public service vehicles by the Ministry of Home Security, has now been fitted on both the near-side and off-side head lamps of all London Transport's 1,557 trolleybuses. The work of fitting the new masks on the near side of the Board's 5,200 buses and coaches has ' been completed, and masks are now being fitted on the off side at the rate of 1,400 a week.

The masks relieve the strain of driving in the black-out by giving the driver a degree of visibility which is far greater than with the original type of mask.

DESPITF. recent setbacks, Damen L./Corporation is persisting in its effort to switch over from trams to buses. The transport manager, Mr. L. Wilkes, is investigating the use of producer gas for buses, and in anticipation of the delivery of a new fleet of oil-driven vehicles the corporation is applying to the Traffic Commissioners to run buses on the Bolton Road section.

BUSES THE introduction of gas fuel for buses has been considered by South Shields Transport Committee, which proposes, as an experiment, to fit five single-deck workmen's buses with gas bags, at a cost of not more than £100 per vehicle.