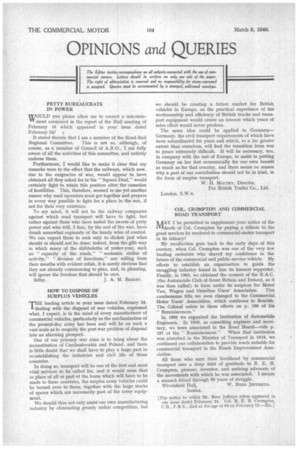 Page 34, 9th March 1940 — OPINIONS and QUERIES
Close
Noticed an error?
If you've noticed an error in this article please click here to report it so we can fix it.
Keywords : R. E. B. Crompton, Transport, Automobile

The Editor invites correspondence on all subjects connected with the use of commercial motors. Letters should be written on only one side of the paper. The right of abbreviation is reserved and no responsibility for views expressed is accepted. Queries must be accompanied by a stamped, addressed envelope.

WOULD you please allow me to correct a mis-statevv ment contained in the report of the Hull meeting of February, 16 which appeared in your issue dated February 24?

It stated therein that I am a member of the Road-Rail Regional Committee. This is not so, although, of course, as a member of Council of A.R.O., I am fully aware of all the activities of this committee, and entirely endorse them.

Furthermore, I would like to make it clear that my remarks were to the effect that the railways, which now, due to the exigencies of war, would appear to have obtained all they asked for in-the "Square Deal," would certainly fight to retain this position after the cessation of hostilities. This, therefore, seemed to me yet another reason why road operators must get together and prepare in every way possible to fight for a place in the sun, if not for their very existence.

To my mind, it will not be the railway companies against which road transport will have to fight, but rather against those who have tasted the sweets of petty power and who will, I fear, by the end of the war, have drunk somewhat copiously of the heady wine of control. We can expect them to seek only to dictate just what should or should not be done; indeed, from the glib way in which many of the shibboleths of yester-year, such as "capacity of the roads," "economic radius of activity," "division of functions," are rolling from their mouths with evident relish, it is surely obvious that they are already commencing to plan, and, in planning, will ignore the freedom that should be ours.

HOW TO DISPOSE OF SURPLUS VEHICLES

THE leading article in your issue dated February 24, 1 dealing with the disposal of war vehicles, expressed what, I expect, is in the mind of every manufacturer of commercial vehicles, particularly as the mechanization of the present-day army has been and will be on such a vast scale as to magnify the post-war problem of disposal into an alarming prospect.

One of our primary war aims is to bring about the reconstitution of Czechoslovakia and Poland, and there is little doubt that we shall have to play a large part in re-establishing the industries and civil life of those countries.

In doing so, transport will be one of the first and most vital services to be called for, and it would seem that in place of all or part of the loans which will have to be made to those countries, the surplus army vehicles could be turned over to them, together with the large stocks of spares which are necessarily part of the army equipment.

We should thus not only assist our own manufacturing industry by eliminating grossly unfair competition, but we should be creating a future market for British vehicles in Europe, as the practical experience of the workmanship and efficiency of British trucks and transport equipment would create an interest which years of sales effort would never produce.

The same idea could be applied to Germany— Germany, the civil transport requirements of which have been subordinated for years and which, to a far greater extent than ourselves, will find the transition from was to peace extremely difficult. It will be necessary, too, in company with the rest of Europe, to assist in putting Germany on her feet economically for our own benefit as much as for that country, and there seems no reason why a part of our contribution should not be in kind, in the form of surplus transport.

COL. CROMPTON AND' COMMERCIAL ROAD TRANSPORT lkiTAY I be permitted to supplement your notice of the LVMeath of Col. Crompton by paying a tribute to the great services he rendered to commercial-motor transport in its infancy?

My recollection goes back to the early days of this century, when Col. Crompton was one of the very few leading motorists who shared my confidence in the future of the commercial and public-service vehicle. My efforts to establish an organization to guide the struggling industry found in him its keenest supporter. Finally, in 1903, we obtained the consent of the R.A.C. (the Automobile Club of Great Britain and Ireland, as it was then called) to form under its auspices the Motor Van, Wagon and Omnibus Users' Association. This cumbersome title we soon changed to the Commercial Motor Users' Association, which continues to flourish. The Colonel refers to these efforts on p. 199 of his " Reminiscences . "

In 1906 we organized the Institution of Automobile Engineers. In 1910, as consulting engineer and secretary, we were associated in the Road Board—vide p. 197 of the "Reminiscences." When that institution was absorbed in the Ministry of Transport in 1919, we continued our collaboration to provide roads suitable for commercial transport in the Roads Improvement Association.

All those who earn their livelihood by commercial transport owe a deep debt of gratitude to R. E. B. Crompton, pioneer, inventor, and untiring advocate of the movements with which he was associated. I mourn a staunch friend through 50 years of struggle.