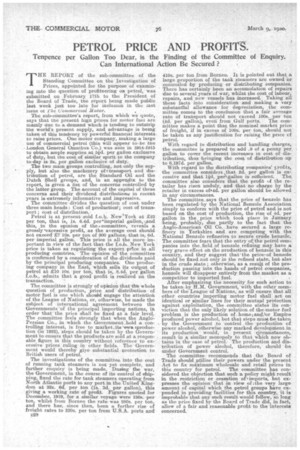 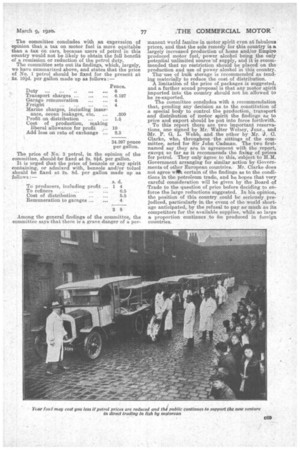 Tenpence per Gallon Too Dear, is the Finding of the Committee of Enquiry. Can International Action Be Secured ?

THE REPORT of the sub-committee, of the Standing Committee on the Investigation of

Prices, appointed for the purpose of examining into the question of profiteering on petrol, was submitted on February 17th to the President of the Board of Trade, the report being made public last week ju:st too late for inclusion in the last

The sub-committee's report, from which we quote, says that the present hign prices for motor Inei are mainly due to a demand which is tending to outstrip the world's present supply, and advantage is being taken of this tendency ny powerful financial interests. to raise prices. One motor company, making a large use of commercial petrol (this will appear to be the a London General Omnibus (Jo.) was awe in W14-1915 to obtain ample supplies at 5*(1. per gallon exclusive of duty, but the cost of similar spirit to the company to-day is 2s. per gallon exclusive of duty. The two main groups controlling, not.only the supply, but also the machinery of f.tranaport and distribution of petrol, are the Standard Oil and. the Dutch Shell groups, and, in an appendix to the report, is given a list of the concerns controlled by the latter group. The account of the capital of these concerns and their dividend, distributions in recent years is extremely informative and impressive. . The committee divides the question of cost under three main heads : Cost of production; cost of trans port ; cost of distribution. •

Petrol is at present sold f.o.b. New'York at £23per ton, that is, is. 6.4d. per4imperial gallon, nnd this, in the opinion of the committee, reveals a grossly excessive profit, as the average cost should not exceed £7 10s. per ton. of 300 gallons, that is, 6d. per imperial gallon. This price is all the more important in view of the fact that the f.o.b. New York price is taken as regulating the export price in all producing countries. The opinion of the committee Is confirmed by a consideration of the dividends paid by the principal producing companies. One producing company in the East, which sells its output of petrol at ,E10 Ws. per ton, that is, 8.4d. per gallon Lob., admits that a good profit ia realized on the

The committee is strongly of opinionthat thn whole question of production, price and distribution of motor. fuel is one which should engage the attention of the League of Nations, or, otherwise, be made the subject' of international agreement between tho Governments of the principal importing nations, in. order that the price shall be fixed at a fair level. The committee feels strongly that when the Anglo-Persian Co., in which the Government:hold a con trolling interest, is free to market. its ;production (in 1922), steps should be taken by the Governnient to ensure thatihe products are sold at a reasonable figure in this country without reference to excessive prices ruling in other fields. The Government would thereby give substantial protection to British users of petrol.

The investigations of the committee into the cost of running tank steamers is not yet complete, and further enquiry is being made. Dinriaig the -war, the Government, in the course of its control of shipping, fixed the, rate for tank steamers operating from North Atlantic ports to any port in the United Kingdom at 32s.. 6d-. per ton (la. ad. per gallon) this giving a working rate of profit. Figures quoted for December, 1919, for a similar voyage were 150s per ton, whilst from Borneo the rate was 280s. per ton, and there has, since then, been a further rise of freight rates to 220s. per ton from U.S.A. ports and

028 410s. per ton from Borneo. It is pointed out that a large proportion of the tank steamers are owned or controlled by producing or distributing companies. There has certainly been an accumulation of repairs due to several years Of war, whilst the cost of labour, repairs, and new vessels has increased. Taking all these facts into consideration and making a very substandal allowance for depreciation, the com

mittee comes to the ,conclusion that a fair average

rate of transport should not exceed 100s. per ton

(4d.per gallon), even from Gull ports. The com

mittee makes a point that the nominal market price of freight, if in excess of 100s. per ton, should not be taken as any justification for raising the price ef petrol.

The committee., says that the price of benzole has been regulated,by the National Benzoic Association

simply to conform with the price of petroi and is not based on the cost of production, the rise of 4d. per gallon in the price which took place in January being, probably, due partly to the fact that the, Anglo-American Oil Co. have secured a large refinery in Yorkshire and are competing with the National Benzole refineries to secure crude benzole.

The committee fears that the entry of:the petrol companies into the.field.of benzole refining .may have a

very grave effect on the production of benzole in this

country, and they suggest that-the price-of benzole should be fixed not only in the refined state, but also

in the crude state; otherwise, as a result of the production passing into the hands of petrol companies, benzole will disappear entirely from the market as a competitor to imported fuel.

After emphasizing the necessity for such -action to be taken by H.M. Government, with the other mem

bers of the League of Nations, as will ensure that all other countries importing motor fuel shall act on identical or similar lines for their mutual protection against exploitation, the •committee states its con

viction that the only likely solution of the-motor fuel problem is the production of .horaeland/or Empire

The committee recommends that the Board of .

Trade should utilize their powers under the present Act to fix maximum wholesale and retail prices in this country for petrol. The committee has considered the objection that such a policy might result in the restriction or cessation of imports, but ex presses the opinion that in view of :the very large amount of capital which the petrol groups have ex pended in providing facilities for this country, it is improbable that any such result would follow, so long as the price fixed by the Board of Trade did, in fact, allow of a fair and reasonable profit to the interests concerned.

The committee concludes with an expression of opinion that,a tax on motor fuel is mere equitable than a -tax on cars, because users of petrol in this coinitry -would not be likely to obtain the full benefit of a remission or reduction of the petrol duty.

manent world famine in motor spirit even at fabulous prices, and that the sole remedy for this country is a largely increased production of home and/or Empire produced motor fuel,power alcohol being the only potential unlimited source 'of supply, and it is recommended that no restriction should be placed on the production and use of power alcohol in this country. Th6 use of bulk storage is recommended as tending materially to reduce the cost of distribution. A limitation of the price of packages is suggested, and a further sound proposal is that any motor spirit imported into the country should not be allowed to be re-exported. The committee concludes with a recommendation that, 'pending any decision as to the constitution of a special body to control the production, transport and distribution of motor spirit the findings as to price and export should be put into force forthwith.

To this report there are two important reservations, one signed by Mr. Walter Wolsey, Junr., and @Jr. F. G. L. Webb, and the other by Mr. J. 0. Clarke, who, throughout the sittings of the committee, acted for Sir John Cadman. The two firstnamed say they are in agreement with the report, except so far as it recommends the fixing of prices for petrol. They only agree to this, subject to H.M. Government arranging for similar action by Governments of other European countries. Mr. Clarke does not agree certain of the findings as to the conditions in the petroleum trade, and he hopes that very careful consideration will be given by the Board -of

• Trade to the question of price before deciding to enforce the large reductions suggested. In his opinion, the position of this country could be seriously prejudiced, particularly in the event of the world shortage anticipated, by the refusal to pay as much as its competitors for the available supplies, while so large a proportion continues ,to be produced in foreign countries.