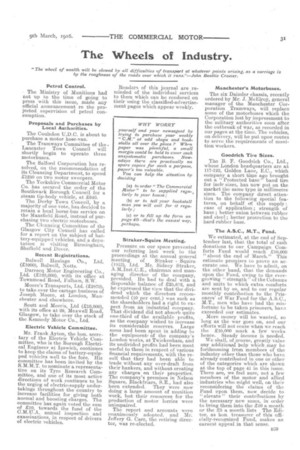 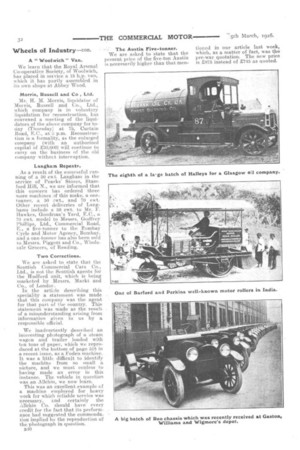 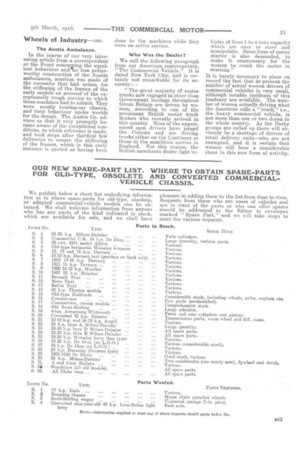 The wheel of wealth will be slowed by all difficulties of transport at whatever points arising, as a carriage is by the roughness of the roads over which it runs."--John Beattie Crozier.

• The Ministry of Munitions had not up to the time of going to press with this issue, made any official announcement re the projected supervision of petrol consumption.

The Coulsdon U.D.C. is about to purchase a motor hose-van.

The Tramways Committee of the. Lancaster Town Council will shortly begin to operate three motorbuses_ The Salford Corporation has resolved, on the recommendation of its Cleansing Department, to spend £1250 on two motor sweepers.

The Yorkshire Commercial Motor Co. has secured the order of the Southwark Borough Council for a steam tip-body vehicle, at 1:640.

The Derby Town Council, by a majority of one vote, has decided to retain a local horse-bus service on the Mansfield Road, instead of purchasing two electric motorbuses.

The Cleansing Committee of the Glasgow City Council has called for a report on the subject of battery-equipped vehicles, and a deputation is visiting Birmingham, Sheffield and Dover.

Moore's Transports, Ltd. (12870), to take over the cartage business of Joseph Moore, at London, Manchester and elsewhere.

Mr. Frank Ayton, the hon. secretary of the Electric Vehicle Committee, who is the Borough Electrical Engineer at Ipswich, continues to keep the claims of battery-equipped vehicles well to the fore. His committee has been invited by the S.M.M.T. to nominate a representative on its Tyre Research Committee, and one of its most active directions of work continues to be the urging of electric-supply undertakings throughout the country to increase facilities for giving both normal and boosting charges. The committee has again voted the sum of 210, towards the fund of the C.M.U. A. annual inspection and examinations, in respect of drivers of electric vehicles. Readers of this journal are reminded of the individual services to them which can be rendered on their using the classified-advertiseruent pages which appear weekly.

Pressure on our space prevented our referring last week to the proceedings at the annual general meeting of Straker Squire (1913), Ltd. Mr. Sidney Straker, A. M. Inst. C. E. , chairman and managing director of the company, presided. Ile had to deal with a disposable balance of £25,612, and he expressed the view that the dividend which the directors recommended (10 per cent.) was such as the shareholders had a right to expect from an industrial company. That dividend did not absorb quite one-third of the available profits, as the company wished to increase its considerable reserves. Large sums had been spent in adding to the equipment" of the company's London works, at Twickenham, and its undivided profits had been most useful to them in respect of various financial requirements, with the resulf that they had been able to trade without any over-draft from their bankers, and without creating any charges on their properties. The company's premises in Nelson Square, Blackfriars, S.E., had also been extended. They were now doing a large amount of munition work, but their resources for the production of motor lorries were unimpaired.

The report and accounts were unanimously adopted, and Mr. Jeffery G. Carr, the retiring director, was re-elected. Manchester's Motorbuses.

The six Daimler chassis, recently ordered by Mr. J. McElroy, general manager of the Manchester Corporation Tramways, will replace some of the motorbuses which the Corporation lost by impressment to the military authorities soon after the outbreak of war, as recorded in our pages at the time. The vehicles, on delivery, will be put upon routes to serve the requirements of munition workers.

The B. F. Goodrich Co., Ltd., whose London headquarters are at 117-123, Golden Lane, E.C., which company a short time ago brought out a "Protected base" band tire for inclr sizes, has now put on the market the same type in millimetre sizes. The company direct attention to the following special features, on behalf of this supply : ease of application; strength of base; better union between rubber and steel ; better protection. to the hard-rubber base.

We estimated, at the end of September last, that the total of cash donations to our Campaign Comforts Fund would reach £10,000 "about the end of March." This estimate prorgises to prove an accurate one. We have to admit, on the other hand, that the demands upon the Fund, owing to the evergrowing " strength" of the Columns and units to which extra comforts are sent by us2 and to our regular monthly contribution to the Prisoners' of War Fund for the A.S.C., M.T., men who have had the misfortune to be taken prisoners, haw; exceeded our estimates.

More money will be wanted, so long as the war goes on, and our efforts will not cease when we reach the £10,000 mark a few weeks hence. Steady income is needed.

We shall, of course, greatly value any additional help which may be forthcoming from members of the industry other than those who have already contributed in one or other of the categories which are shown at the top of page 41 in this issue. There are, we feel sure, not a few members of the motor and allied industries who might well, on their reconsidering the claims of the Fund upon them, now decide to "elevate" their contributions by the necessary new sums, in oeder to bring them into the £10 a month or the £5 a month lists The Editor, as hon. treasurer of this officially-recognized Fund, makes an earnest appeal in that sense. A "Woolwich" Van.

We learn that the Royal Arsenal Co-operative Society, of Woolwich, has placed in service a 15 h.p.. van, . which it has partly assembled in its own shops at Abbey Wood.

Mn H. M. Morris, liquidator of Morris, Russell and Co., Ltd., which company is in voluntary liquidation for reconstruction, has convened a meeting of the liquidators of the above company for to day (Thursday) at 75, Curtain Road, E.G., at p.m. Reconstruc tion tion s a formality, as the enlarged company (with an authorized capital of 830,000) will continue to carry on the business of the old company without interruption.

As a result of the successful running of a 50 cwt. Langham in the service of Pearks' Stores, Stamford Hill, N., we are informed that this concern has ordered three more machines of this make, a onetonner, a 50 .2wt., and 70 cwt. Other recent deliveries, of Langbarns include a 50 cwt. to Mr. F. liawkes, Goodman's Yard, E.G., 70 cwt. model to Messrs. Godfrey Phillips, Ltd., Commercial Road, E., a five-tonner to the Bombay Cycle and Motor Agency, Bombay. and a one-tonner has also been sold 10 Messrs. Piggott and Co., Wholesale Grocers, of Reading.

We are asked to state that the Scottish Commercial Cars Co., Ltd. is not the Scottish agents for the Ltd., unit, which is being marketed by Messrs. Markt and Co., of Londor.

In the artkle describing this speciality a statement was made that this company was the agent for that part of the country. This statement was made as the result of a misunderstanding arising from information given to us by a responsible official.

We inadvertently described an interesting photograph of a. steam wagon and trailer loaded with ten tons of paper, which we reproduced at the bottom of page 518 in a recent issue, as a Fodeo machine.. It was a little difficult to identify the machine from so small a, picture, and we must confess to having made an error in this instance. The vehicle in question was an Allcbin, we now learn.

This was an excellent example of a machine employed for heavy work for which reliable service was necessary, and certainly the Allchin Co. should have every credit for the fact that its performance had suggested the commendation implied by the reproduction of the photograph in question.

We are asked to state that the present price of the five-ton Austin Is necessarily higher than that men tioned in our article last week, which, as a matter of fact, was the pre-war quotation. The new price is .2875 instead of 8745 as quoted.

In the course of our very interesting article from a correspondent at the Front concerping the excellent behaviour andwno less praiseworthy construction of the Austin ambulances, mention was made of the necessity that had arisen for the stiffening of the frames of the early models on account of the exceptionally rough service to which these machines had to submit. They were mostly touring-car chassis, and their behaviour spoke worlds for the design. The Austin Co. advises us that it very promptly became aware of the exceptional conditions, to which reference is made, and took steps after thOfirst few deliveries to ensure the stiffening of the frames, which in this early instance is quoted as having been done to the machines while they were on active service.

Who Was the Dealer?

We cull the following paragraph from our American, contemporary, "The Commercial Vehicle," It is dated New York City, and is certainly not remarkable for its accuracy :—

" The Treat majority <1 motor trucks now engaged in other than Government haulage throughout Great Britain are driven by women, according to one of the prominent British motor truck dealers who recently arrived in this country. Most of the experienced men drivers have joincd the Colours and are driving trucks either on the Continent or those in the munitions service in England. For this reason, the British merchants desire light ye

hides of from 1 to 2 tons capacity which are easy to steer and manipulate. Some form of motor starter is also demanded, to make it unnecessary for the women te crank the motor in starting."

It is barely necessary to place on record the fact that at present the number of actual women drivers of oonimerciaI vehicles is very small, although notable incidents of this tendency are available. The number of women actually driving what the American calls a truck, i.e., the .heavy commercial vehicle, is not more than one or two dozen in the whole country. As the Derby groups are called up there will obviously be a shortage of drivers of retail delivery units—who are not exempted, and it is certain that women will bear a considerable share in this new form of activity.