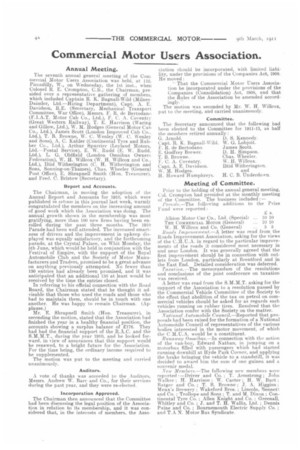 Page 6, 9th March 1911 — Commercial Motor Users Association.
Close
Noticed an error?
If you've noticed an error in this article please click here to report it so we can fix it.
Keywords : Dearborn, Michigan, Ford Motor Company

The Chairman, in moving the adoption of the Annual Report and Accounts for 1910, which were published in extenso in this journal last week, warmly congratulated the members on the increasing amount of good work which the Association was doing. The annual growth shown in the membership was most gratifying, more than 100 new firms having been enrolled during the past three months. The 1910 Parade had been well attended. The increased smartness of drivers and the improvement in upkeep displayed was equally satisfactory, and the forthcoming parade, at the Crystal Palace, on Whit Monday, the 5th June, which would be held in conjunction with the Festival of Empire, with the support of the Royal Automobile Club and the Society of Motor Manufacturers and Traders, promised to be a great advance on anything previously attempted. No fewer than 130 entries had already been promised, and it was anticipated that an additional 150 at least would be received by the time the entries closed.

In referring to his official connection with the Road Board, the Chairman stated that he thought it advisable that those who used the roads and those who had to maintain them, should be in touch with one another. He was happy to remain Chairman. (Applause.) Mr. E. Shrapnel! Smith (Hon. Treasurer), in seconding the motion, stated that the Association had finished the year in a healthy financial position, the accounts showing a surplus balance of £176. They had had the financial support of the R.A.C. and the S.M.M.T., during the year 1910, and he looked forward, in view of assurances that this support would be renewed, to a bright future for the Association. For the time being, the ordinary income required to be supplemented.

The motion was put to the meeting and carried unanimously.

A vote of thanks was accorded to the Auditors, Messrs. Andrew W. Barr and Co., for their services during the past year, and they were re-elected.

The Chairman then announced that the Committee had been discussing the legal position of the Association in relation to its membership, and it was considered that, in the interests of members, the Asso

ciation should be incorporated, With limited liability, under the provisions of the Companies Act, 1908. He moved : That the Commercial Motor Users Association be incorporated under the provisions of the Companies (Consolidation) Act, 1908, and that the Rules of the Association be amended accordingly... The motion was seconded by Mr. W. H. Willcox, put to the meeting, and carried unanimously.

Prior to the holding of the annual general meeting, Col. Crompton had presided at the monthly meeting of the Committee. The business included :— Perole..—The following additions to the Prize Fund were reported :

Roac14 Improvement.—A letter was read from the Roads Improvement Association, asking for the views of the C..M.U.A. in regard to the particular improvements of the roads it considered most necessary in and near London. It was generally agreed that the first. improvenient should be in connection with outlets from London, particularly at Brentford and in the East End. Detailed consideration was deferred. raxation.—The memorandum of the resolutions and conclusions of the joint conference on taxation was received.

A letter was read from the S.M.M.T. asking for the support of the Association to a resolution passed by the Commercial Vehicle Committee of the Society to the effect that abolition of the tax on petrol on commercial vehicles should be asked for as regards such vehicles running On rubber tires. Resolved that the Association confer with the Society on the matter.

Ihinaway OmArtibus.—In connection with the action of the van-boy, Edward Nathan, in jumping on a motorbus filled with passengers which had started running downhill at Hyde Park Corner, and applying the brake bringing the vehicle to a standstill, it was decided to award him the sum of one guinea and a souvenir medal.