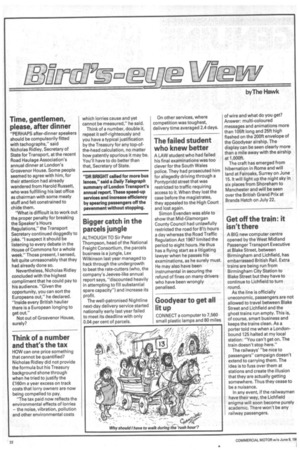 "PERHAPS after-dinner speakers should be compulsorily fitted with tachographs," said Nicholas Ridley, Secretary of State for Transport, at the recent Road Haulage Association's annual dinner at London's Grosvenor House. Some people seemed to agree with him, for their attention had already wandered from Harold Russett, who was fulfilling his last office as chairman with some meaty stuff and felt constrained to chide them.

"What is difficult is to work out the proper penalty for breaking the Speaker's Hours Regulations," the Transport Secretary continued doggedly to joke. "I suspect it should be listening to every debate in the House of Commons for a whole week." Those present, I sensed, felt quite unreasonably that they had already done so.

Nevertheless, Nicholas Ridley concluded with the highest compliment that he could pay to his audience. "Given the opportunity, you can sort the Europeans out," he declared. "Inside every British haulier there is a European longing to get out."

Not out of Grosvenor House, surely?