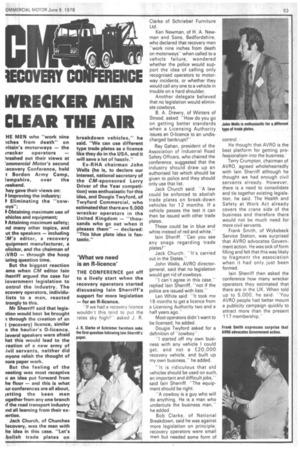 HE MEN who "work nine iches from death" on mitain's motorways — the trecker operators — hwashed out their views at 'ommercial Motor's second ecovery Conference, held t Bordon Army Camp, lampshire, over the teekend.

hey gave their views on: Improving the industry;

Obtaining maximum use of elides and equipment; Attaining maximum safety; nd many other topics, and ut the speakers — including editor, a recovery quipment manufacturer, a olicitor, and the chairman of NRO — through the hoop luring question time.

But the biggest reaction ame when CM editor lain Iherriff argued the case for lovernment legislation to control the industry. The acovery operators, individulists to a man, reacted trongly to this.

Mr Sherriff said that legisition would best be brought • through the creation of an I (recovery) licence, similar o the haulier's 0-licence. ieveral speakers were afraid hat this would lead to the reation of a new army of ivil servants, neither did inyone relish the thought of tore paper work.

But the feeling of the meeting was most receptive o an idea put forward from he floor — and this is what air conferences are all about, letting the keen men ogether from any one branch If the road transport industry Ind all learning from their exoertise Jack Church, of Churches tecovery, was the man with he idea in this case. "Let's bolish trade plates on breakdown vehicles," he said. "We can use different type trade plates as a licence like they do in the USA, and it will save a lot of hassle."

Ex-RHA chairman John Wells (he is, to declare our interest, national secretary of the CM-sponsored Lorry Driver of the Year competition) was enthusiastic for this idea, and Dougie Twyford, of Twyford Commercial, who estimated that there are 5,000 wrecker operators in the United Kingdom — "thousands who go out when it pleases them" — declared: "This blue plate idea is fantastic."

'What we need is an R-licence'

THE CONFERENCE got off to a lively start when the recovery operators started discussing lain Sherriff's support for more legislation — for an R-licence.

"If we had a recovery licence wouldn't this tend to put the rates sky high?'' asked J. R. Clarkeof Schrieber Furniture Ltd.

Ken Newman, of H. A. Newman and Sons, Bedfordshire, who declared that recovery men "work nine inches from death on motorways" when called to a vehicle failure, wondered whether the police would support the idea of calling only recognised operators to motorway incidents, or whether they would call any one to a vehicle in trouble on a hard shoulder.

Another delegate believed that no legislation would eliminate cowboys.

B. A. Drewry, of Winters of Strood, asked: "How do you go on getting better standards when a Licensing Authority issues an 0-licence to an undischarged bankrupt?"

Ray Gahan, president of the Association of Industrial Road Safety Officers, who chaired the conference, suggested that the industry should draw up an authorised list which should be given to police and they should only use that list.

Jack Church said "A law could be enforced to abolish trade plates on break-down vehicles for 1 2 months. If a vehicle passes the test it can then be issued with other trade plates.

These could be in blue and white instead of red and white," lain Sheriff: "Can you see any snags regarding trade plates?"

Jack Church: "It's carried out in the States."

John Wells, AVRO directorgeneral, said that no legislation would get rid of cowboys.

"l can't agree in this case," replied lain Sherriff, "not if the police are issued with lists."

Len White said: "It took me 18 months to get a licence from a Licensing Authority two and a half years ago."

Most operators didn't want to be licensed, he added.

Dougie Twyford asked for a definition of "cowboy".

–It is ridiculous that old vehicles should be used on such. an important and difficult jobs," said lain Sherriff. "The equipment should be right.

"A cowboy is a guy who will do anything. H.e is a man who undercuts the business man," he added.

Bob Clarke, of National Breakdown, said he was against more legislation on principle; recovery operators were small men but needed some form of control.

He thought that AVRO is the best platform for getting professionalism into the business.

Terry Crumpton, chairman of AVRO, agreed wholeheartedly with lain Sherriff although he thought we had enough civil servants already. However, there is a need to consolidate and tie together existing legislation, he said. The Health and Safety at Work Act already covers the crane side of the business and therefore there would not be much need .for more civil servants.

Frank Smith, of Wykebeck Service Station, was surprised that AVRO advocates Government action. He was sick of form filling and felt that this was likely to fragment the association when it had only. just been formed.

lain Sherriff then asked the conference how many wrecker operators they estimated that there are in the UK. When told up to 5,000, he said. "You AVRO people had better mount a publicity campaign quickly to attract more than the present 1 1 7 membership." ,