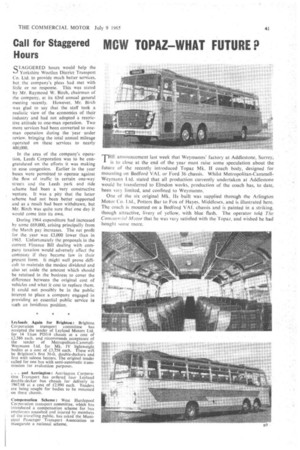 QTAGGERED hours would help the Yorkshire Woollen District Transport Co. Ltd. to provide much better services, but the company's pleas had met with little or no response. This was stated by Mr. Raymond W. Birch, chairman of the company, at its 63rd annual general meeting recently. However, Mr. Birch was glad to say that the staff took a realistic view of the economics of their industry and had not adopted a restrictive attitude to one-man operation. Two more services had been converted to oneman operation during the year under review, bringing the total annual mileage operated on these services to nearly 400,000.

In the area of the company's operation, Leeds Corporation was to be congratulated on the efforts it was making to ease congestion. Earlier in the year buses were permitted to operate against the flow of traffic in certain one-way strees and the Leeds park and ride scheme had been a very constructive venture. It was a pity that the latter scheme had not been better supported and as a result had been withdrawn, but Mr. Birch was quite sure that one day it would come into its own.

During 1964 expenditure had increased by some £69,000, arising principally from the March pay increases. The net profit for the year was £3,000 lower than in 1963. Unfortunately the proposals in the current Finance Bill dealing with company taxation would adversely affect the company if they became law in their present form. It might well prove difficult to maintain the modest dividend and also set aside the amount which should be retained in the business to cover the difference between the original cost of vehicles and what it cost to replace them. It could not possibly be in the public interest to place a company engaged in providing an essential public service in such an invidious position.

Leyiands Again for Brighton : Brighton Corporation transport corrirnittec has accepted the tender of Leyland Motors Ltd. for 14 Titan PD3/4 chassis at a cost of £2,586 each, and recommends acceptance of the tender of Metropolitan-CarnmellWeymann Ltd. for Mk. IV lightweight bodies at a cost of £3,758 each. These will be Brighton's first 30-ft. double-deckers and first with saloon heaters. The original tender called for one bus with semi-automatic transmission for evaluation purposes.

tion Transport has ordered four Leyland double-decker bus chassis for delivery in 1967/68 at a cost of £2,990 each. Tenders are being sought for bodies to be mounted on these chassis.

Compensation Scheme : West Hartlepool Corporation transport committee, which has introduced a compensation scheme for bus emplo)ees assaulted and injured by members of the travelling public, has asked the Municipal Passenger Transport Association to inaugurate a national scheme. THE announcement last week that Weymanns' factory at Addlestone, Surrey, I is to close at the end of the year must raise some speculation about the future of the recently introduced Topaz Mk. II coach body, designed for mounting on Bedford VAL or Ford 36 chassis. Whilst Metropolitan-CammellWeyrnann Ltd. stated that all production Currently undertaken at Addlestone would be transferred to Elmdon works, production of the coach has, to date, been very limited, and confined to Weymanns.

One of the six original Mk. Hs built was supplied through the Arlington Motor Co. Ltd., Potters Bar to Fox of Hayes, Middlesex, and is illustrated here. The coach is mounted on a Bedford VAL chassis and is painted in a striking, though attractive, livery of yellow, with blue flash. The operator told Pre Commercial Motor that he was very satisfied with the Topaz, and wished he had bought sonic more.