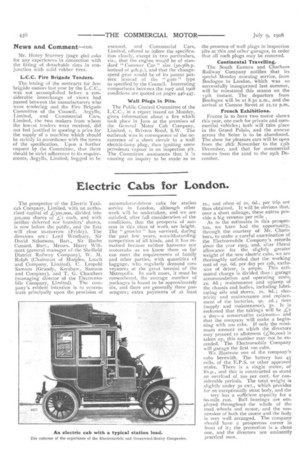 Page 12, 9th July 1908 — Electric Cabs for London.
Close
Noticed an error?
If you've noticed an error in this article please click here to report it so we can fix it.
Keywords : Taxicab, Electromobile, Hansom Cab, Bart Simpson, Prospectus, Business / Finance

The prospectus of the Electric Taxicab Company, Limited, with an authorised capital of £300,000, divided into 300,000 shares of Li each, and with neither deferred nor founders' shares, is now before the public, and the lists will close to-morrow (Friday). The directors are : Lord Westbury, Sir David Salomons, Bart., Sir Bache Cunard, Bart., Messrs. Harry Willmott (general manager of the Sheffield District Railway Company), W. M. Ralph (Chairman of Marples, Leach and Company, Limited), C. Leopold Samson (Grundy, Kershaw, Samson and Company), and T. G. Chambers (managing director of the Electron-10bile Company, Limited). The company's evident intention is to concentrate principally upon the provision of

accumulator-driven cabs for station service in London, although other work will be undertaken, and we are satisfied, after full consideration of the conditions, that the prospects of success in this class of work are bright. The " growler " has survived, during the past few years, notwithstanding competition of all kinds, and it has remained because neither hansoms nor motorcabs as we know them_ so far can meet the requirements of family and other parties, with quantities of luggage, who regularly demand conveyances at the great termini of the Metropolis. In such cases, it must be remembered, the average number of packages is found to be approximately six, and there are generally three passengers; extra payments of at least is., and often of IS. 6d., per trip are thus obtained. It will be obvious that, over a short mileage, these extras provide a big revenue per mile .

As to the estimates in this prospectus, we have had the opportunity, through the courtesy of Mr. Chambers, to make a careful examination of the Electromobile Company's records since the year 1903, and, after liberal allowance for the slightly greater weight of the new electric cabs, we are thoroughly satisfied that the working cost of 19s. 6d. per day per cab, exclusive of driver, is ample. This eettmated charge is divided thus : garage accommodation and operating costs, 25. Sd.; maintenance and upkeep of the chassis and bodies, including lubricating oils and stores, 25. 8d.; electricity and maintenance and replacement of the batteries, 9s. 2d. ; tires (supply and maintenance), 55. It is reckoned that the takings will be ZI a day—a conservative estimate— and that the company will make a beginning with too cabs. If only the minimum amount on which the directors may proceed to allotment (L:.6o,000) is taken up, this number may not be exceeded. The Eleetromobile Company will garage the first too cabs.

We illustrate one of the company's cabs herewith, The battery has 45 cells, of the E.P.S. or other approved make. There is a single motor, of 8h.p., and this is constructed to stand an overload of too per cent, for considerable periods. The total weight is slightly under 30 cwt., which provides for an exceptionally stout body, and the tery has a s-ufficient capacity for a 6o-mile ,run. Ball hearings are ernployed throughout the whole of the road wheels and motor, and the susnension of both the motor and the body is very well arranged. The company should have a prosperous career in front of it ; the promotion is a clean one, and the directors are eminently practical men,