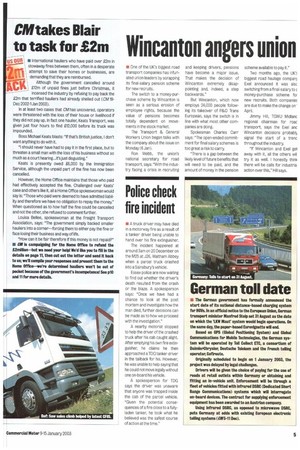 • One of the UK's biggest road transport companies has infuriated union leaders by scrapping its final-salary pension scheme for new recruits.

The switch to a money-purchase scheme by Wincanton is seen as a serious erosion of employee rights, because the value of pensions becomes totally dependent on movements in the stock market.

The Transport & General Workers Union began talks with the company about the issue on Monday (6 Jan).

Ron Webb, the union's national secretary for road transport, says: "With the industry facing a crisis in recruiting and keeping drivers, pensions have become a major issue. That makes the decision of Wincanton extremely disappointing and, indeed, a step backwards."

But Wincanton, which now employs 24,000 people following its takeover of P&O Trans European, says the switch is in line with what most other companies are doing.

Spokesman Charles Carr says: "The open-ended commitment for final salary schemes is too great a risk to carry.

"There is a gap between the likely level of future benefits that will need to be paid, and the amount of money in the pension scheme available to pay it."

Two months ago, the UK.': biggest road haulage compam Exel announced it was alsc switching from a final-salary to money-purchase scheme for new recruits. Both companier. are due to make the change on April.

"If Wincanton and Exel gel away with it, all the others wil try it as well. I honesty think there will be calls for industria action over this," Hill says.