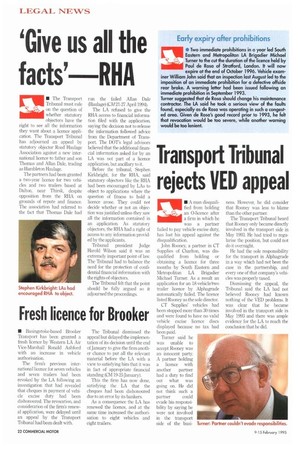 • A man disqualified from holding an 0-licence after a firm in which he was a partner failed to pay vehicle excise duty, has last his appeal against the disqualification.

John Rooney, a partner in CT Supplies of Charlton, was disqualified from holding or obtaining a licence for three months by South Eastern and Metropolitan LA Brigadier Michael Turner. As a result an application for an 18-vehicle/two trailer licence by Alphagrade automatically failed. The licence listed Rooney as the sole director.

CT Supplies' vehicles had been stopped more than 30 times and were found to have no valid vehicle excise licence discs displayed because no tax had been paid.

Turner said he was unable to accept Rooney was an innocent party. A partner holding a licence with another partner had a duty to find out what was going on. He did not think such a partner could evade his responsibility by saying he were not involved in the transport side of the busi nes& However, he did consider that Rooney was less to blame than the other partner.

The Transport Tribunal heard that Rooney only became directly involved in the transport side in May 1993. He had tried to regularise the position, but could not do it overnight.

He had the sole responsibility for the transport in Alphagrade in a way which had not been the case in the partnership, and every one of that company's vehicles was properly taxed.

Dismissing the appeal, the Tribunal said the LA had not believed Rooney had known nothing of the VED problems It was clear that he became involved in the transport side in May 1993 and there was ample evidence for the LA to reach the conclusion that he did.