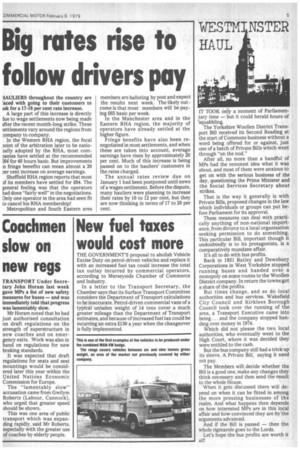 Page 7, 9th February 1979 — Coachmen slow on new regs
Close
Noticed an error?
If you've noticed an error in this article please click here to report it so we can fix it.
Keywords : Counties Of England, Local Government In England, Horam, Wealden, Cannock, Gwilym Roberts, Gwilym, Politics Of The United Kingdom

TRANSPORT Under Secretary John Horam last week gave MPs a list of new safety measures for buses — and was immediately told that progress was lamentably slow.

Mr Horam noted that he had just authorised consultation on draft regulations on the strength of superstructure in new coaches and on emergency exits. Work was also in hand on regulations for new braking standards.

It was expected that draft regulations for seats and seat mountings would be considered later this year within the United Nations Economic Commission for Europe.

The "lamentably slow" accusation came from Gwilym Roberts (Labour, Cannock), who urged that greater speed should be shown.

This was one area of public transport which was expanding rapidly, said Mr Roberts, especially with the greater use of coaches by elderly people.