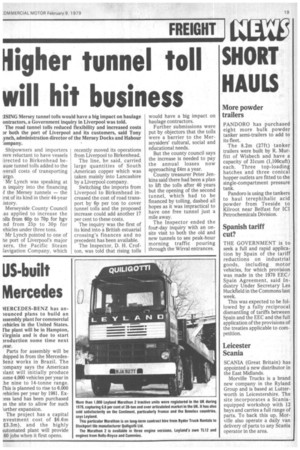 Page 21, 9th February 1979 — SHORT HAULS
Close
Noticed an error?
If you've noticed an error in this article please click here to report it so we can fix it.
Keywords : Food And Drink, Semi-trailer Truck, Trucks, European Economic Community, Pandoro, Scania

Pandoro is using the tankers to haul terephthalic acid powder from Teeside to Kilroot near Belfast for ICI Petrochemicals Division.

THE GOVERNMENT is to seek a full and rapid application by Spain of the tariff reductions on industrial goods, including motor vehicles, for which provision was made in the 1970 EEC/ Spain Agreement, said Industry Under Secretary Les Huckfield in the Commons last week.

This was expected to be followed by a fully reciprocal dismantling of tariffs between Spain and the EEC and the full application of the provisions of the treaties applicable to competition.

SCANIA (Great Britain) has appointed a new distributor in the East Midlands.

Morville Trucks is a brand new company in the Ryland Group and is based at Lutterworth in Leicestershire. The site incorporates a Scaniaequipped workshop with 12 bays and carries a full range of parts. To back this up, Morville also operate a daily van delivery of parts to any Scania operator in the area.