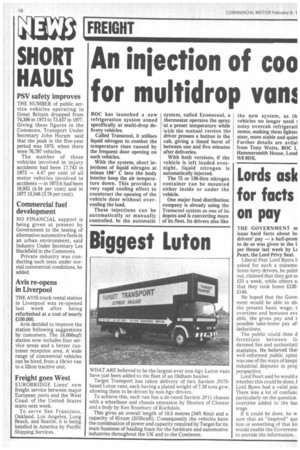 THE NUMBER of public service vehicles operating in Great Britain dropped from 74,306 in 1973 to 73,437 in 1977. Giving these figures in the Commons, Transport Under Secretary John Horam said that the peak in the five-year period was 1975, when there were 76,797 vehicles.

NO FINANCIAL support is being given at present by Government to the testing of alternative automotive fuels in an urban environment, said Industry Under Secretary Les Huckfield in the Commons.

Private industry was conducting such tests under normal commercial conditions, he added.

THE AVIS truck rental station in Liverpool was re-opened last week after being refurbished at a cost of nearly E100,000.

Avis decided to improve the station following suggestions by customers. The 18,000sqft station now includes four service areas and a better customer reception area. A wide range of commercial vehicles can be hired, from a lOcwt van to a 32ton tractive unit.

EUROBRIDGE Lines' new freight service between major European ports and the West Coast of the United States starts next week.

To serve San Francisco, Oakland, Los Angeles, Long Beach, and Seattle, it is being handled in America by Pacific Shipping Services.