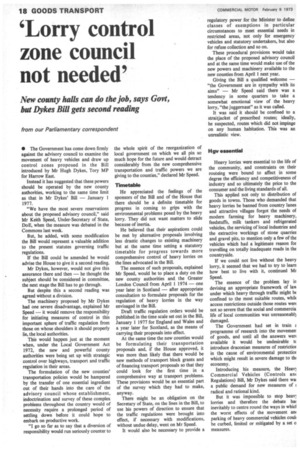 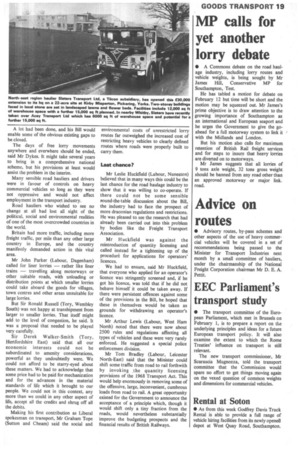 Page 20, 9th February 1973 — 'Lorry control zone council not needed'
Close
Noticed an error?
If you've noticed an error in this article please click here to report it so we can fix it.
Keywords : Truck, Motoring Taxation In The United Kingdom, Law Enforcement, Road Safety, Traffic Law

New county halls can do the job, says Govt, but Dykes Bill gets second reading

from our Parliamentary correspondent • The Government has come down firmly against the advisory council to examine the movement of heavy vehicles and draw up control zones proposed in the Bill introduced by Mr Hugh Dykes, Tory MP for Harrow East.

Instead it has suggested that these powers should be operated by the new county authorities, working to the same time limit as that in Mr Dykes' Bill — January 1 1977.

"We have the most severe reservations about the proposed advisory council," said Mr Keith Speed, Under-Secretary of State, DoE, when the measure was debated in the Commons last week.

But, he added, with some modification the Bill would represent a valuable addition to the present statutes governing traffic regulations.

If the Bill could be amended he would advise the House to give it a second reading.

Mr Dykes, however, would not give this assurance there and then — he thought the subject should be considered in committee, the next stage the Bill has to go through.

But despite this a second reading was agreed without a division.

The machinery proposed by Mr Dykes had one severe disadvantage, explained Mr Speed it would remove the responsibility for initiating measures of control in this important sphere of traffic regulation from those on whose shoulders it should properly lie, the local authorities.

This would happen just at the moment when, under the Local Government Act 1972, the new and powerful county authorities were being set up with strategic control over highways, transport and traffic regulation in their areas.

The formulation of the new counties' transportation policies would be hampered by the transfer of one essential ingredient Out of their hands into the care of the advisory council whose establishment, indoctrination and survey of these complex problems throughout the country would of necessity require a prolonged period of settling down before it could hope to embark on productive work.

"I go so far as to say that a diversion of responsibility would run seriously counter to the whole spirit of the reorganization of local government on which we all pin so much hope for the future and would detract considerably from the new comprehensive transportation and traffic powers we are giving to the counties," declared Mr Speed.

He appreciated the feelings of the sponsors of the Bill and of the House that there should be a definite timetable for progress in coming to grips with the environmental problems posed by the heavy lorry. They did not want matters to slide because of inertia.

He believed that their aspirations could be met by alternative proposals involving less drastic changes to existing machinery but at the same time setting a statutory timetable for progress towards more comprehensive control of heavy lorries on the lines advocated in the Bill.

The essence of such proposals, explained Mr Speed, would be to place a duty on the new county authorities and the Greater London Council from April 1 1974 — one year later in Scotland — after appropriate consultation to formulate proposals for the regulation of heavy lorries in the way envisaged in the Bill.

Draft traffic regulation orders would be published in the time scale set out in the Bill, January 1 1977 for England and Wales and a year later for Scotland, as the means of carrying their proposals into effect.

At the same time the new counties would be formulating their transportation proposals and, if the House approved, it was more than likely that there would be new methods of transport block grants and of financing transport proposals so that they could look for the first time in a comprehensive way at transport problems. These provisions would be an essential part of the survey which they had to make, anyway.

There might be an obligation on the Secretary of State, on the lines in the Bill, to use his powers of direction to ensure that the traffic regulations were brought into effect, if necessary with modifications, without undue delay, went on Mr Speed.

It would also be necessary to provide a regulatory power for the Minister to define classes of exemptions in particular circumstances to meet essential needs in restricted areas, not only for emergency vehicles and statutory undertakers, but also for refuse collection and so on.

These procedural provisions would take the place of the proposed advisory council and at the same time would make use of the new powers and machinery available to the new counties from April 1 next year.

Giving the Bill a qualified welcome — "the Government are in sympathy with its aims" — Mr Speed said there was a tendency in some quarters to take a somewhat emotional view of the heavy lorry, "the juggernaut" as it was called.

It was said it should be confined to a straitjacket of prescribed routes; ideally, he suspected, routes which did not impinge on any human habitation. This was an unrealistic view.

Heavy lorries were essential to the life of the community, and constraints on their routeing were bound to affect in some degree the efficiency and competitiveness of industry and so ultimately the price to the consumer and the living standards of all.

This applied not only to distribution of goods in towns. Those who demanded that heavy lorries be banned from country lanes and attractive villages forgot the needs of modern farming for heavy machinery, feedstuffs, milk tankers and refrigerated vehicles, the servicing of local industries and the extractive workings of stone quarries and gravel pits, to mention only a few of the vehicles which had a legitimate reason for travelling on totally inadequate roads in the countryside.

If we could not live without the heavy lorry, it seemed that we had to try to learn how best to live with it, continued Mr Speed.

The essence of the problem lay in devising an appropriate framework of laN; under which heavy through traffic might bt confined to the most suitable routes, whilt access restrictions outside those routes wen not so severe that the social and commercia life of local communities was unreasonabl3 damaged.

The Government had set in train 2 programme of research into the movemen of goods, and until all the answers wen available it would be undesirable tt introduce draconian measures of restrictioi in the cause of environmental protectiol which might result in severe damage to till economy.

But it was impossible to stop hear lorries and therefore the debate haf inevitably to centre round the ways in whicl the worst effects of the movement am parking of heavy commercial vehicles cooll be curbed, limited or mitigated by a set o measures. A lot had been done, and his Bill would enable some of the obvious existing gaps to be closed.

The days of free lorry movements anywhere and everwhere should be ended, said Mr Dykes. It might take several years to bring in a comprehensive national scheme, but his provisions at least would assist the problem in the interim.

Many sensible road hauliers and drivers were in favour of controls on heavy commercial vehicles so long as they were not oppressive and would not affect employment in the transport industry.

Road hauliers who wished to see no change at all had lost all sight of the political, social and environmental realities of one of the most overcrowded countries in the world.

Britain had more traffic, including more freight traffic, per mile than any other large country in Europe, and the country manifestly demanded action in this vital area.

Mr John Parker (Labour, Dagenham) called for liner lorries — rather like liner trains — travelling along motorways or other suitable roads, with unloading or distribution points at which smaller lorries could take aboard the goods for villages, town centres and other areas unsuitable for large lorries.

But Sir Ronald Russell (Tory, Wembley South) was not happy at transhipment from larger to smaller lorries. That itself might add to the level of congestion, he said. It was a proposal that needed to be played very carefully.

Sir Derek Walker-Smith (Tory, Hertfordshire East) said that all our economic interests could not be subordinated to amenity considerations, powerful as they undoubtedly were. We could not afford to be starry-eyed about these matters. We had to acknowledge that some price had to be paid for mechanization and for the advances in the material standards of life which it brought to our people. We could not in this context, any more than we could in any other aspect of life, accept all the credits and shrug off all the debits.

Making his first contribution as Liberal spokesman on transport, Mr Graham Tope (Sutton and Cheam) said the social and environmental costs of unrestricted lorry routes far outweighed the increased cost of restricting heavy vehicles to clearly defined routes where roads were properly built to carry them.

Mr Leslie Huckfield (Labour, Nuneaton) believed that in many ways this could be the last chance for the road haulage industry to show that it was willing to co-operate. If there could not be some sensible round-the-table discussion about the Bill, the industry had to face the prospect of more draconian regulations and restrictions. He was pleased ta see the research that had already been carried out into this problem by bodies like the Freight Transport Association.

Mr H uc kfieid was against the reintroduction of quantity licensing and called instead for a tightening up of the procedure for applications for operators' licences.

We had to ensure, said Mr Huckfield, that everyone who applied for an operator's licence was stringently screened and, if he got his licence, was told that if he did not behave himself it could be taken away. If there were persistent offences against some of the provisions in the Bill, he hoped that these in themselves would be taken as grounds for withdrawing an operator's licence.

Mr Arthur Lewis (Labour, West Ham North) noted that there were now about 2500 rules and regulations affecting all types of vehicles and these were very rarely enforced. He suggested a special police enforcement division.

Mr Tom Bradley (Labour, Leicester North-East) said that the Minister could shift some traffic from road to rail forthwith by invoking the quantity licensing provisions of the 1968 Transport Act. This would help enormously in removing some of the offensive, large, inconvenient, cumbrous loads from road to rail. A great opportunity existed for the Government to announce the acceptance of a principle which, though it would shift only a tiny fraction from the roads, would nevertheless substantially improve the budgeting prospects and the financial results of British Railways.