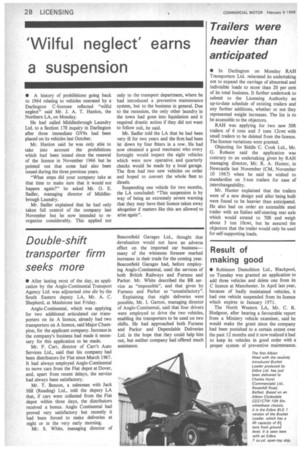 • After lasting most of the day, an application by the Anglo-Continental Transport Agency Ltd. was adjourned sine die by the South Eastern deputy LA, Mr. A. C. Shepherd, at Maidstone last Friday.

Anglo-Continental, which was applying for two additional articulated car transporters on its A licence, already had two transporters on A licence, said Major Champion, for the applicant company. Increase in the company's business had made it necessary for this application to be made.

Mr. F. Carr, director of Can's Auto Services Ltd., said that his company had been distributors for Fiat since March 1967. It had always employed Anglo-Continental to move cars from the Fiat depot at Dover, and, apart from recent delays, the service had always been satisfactory.

Mr. T. Benson, a salesman with Jack Hill (Reading) Ltd., told the deputy LA that, if cars were collected from the Fiat depot within three days, the distributors received a bonus. Anglo Continental had proved very satisfactory but recently it had been forced to make deliveries at night or in the very early morning. Mr. S. White, managing director of Beaconfield Garages Ltd., thought that devaluation would not have an adverse effect on the imported car business— many of the witnesses foresaw marked increases in their trade for the coming year, Beaconfield Garages had, before employing Anglo-Continental, used the services of both British Railways and Furness and Parker. Mr. White described the BR service as "impossible", and that given by Furness and Parker as "unsatisfactory".

Explaining that night deliveries were possible, Mr. I. Garton, managing director of Anglo-Continental, said that four drivers were employed to drive the two vehicles, enabling the transporters to be used on two shifts. He had approached both Furness and Parker and Dependable Deliveries Ltd. in the hope that they could help him out, but neither company had offered much assistance.