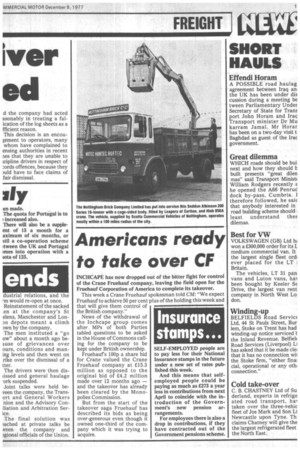 Page 21, 9th December 1977 — YLLtZ
Close
Noticed an error?
If you've noticed an error in this article please click here to report it so we can fix it.
Keywords : Counties Of England, Local Government In England, Parliament Of The United Kingdom, Horam, Wealden, Stoke-on-trent, Cochin International Airport

A POSSIBLE road haulag agreement between Iraq an the UK has been under dis cussion during a meeting be tween Parliamentary Under Secretary of State for Trans port John Horam and Iraq Transport minister Dr Mu karram Jamal. Mr Horar has been on a two-day visit t Baghdad as guest of the frac government.

WHICH roads should be bui next and how they should b built presents "great dilen mas" said Transport Ministt William Rodgers recently a he opened the A66 Penrud dock by-pass, Cumbria. 1 therefore followed, he saic that anybody interested in road building scheme should , least understand thes dilemas.

VOLKSWAGEN (GB) Ltd h; won a £300,000 order for its L medium commercial van. It the largest single fleet ordi ever placed for the LT i Britain.

BELFIELDS Road Service Ltd, 44 St Pauls Street, Bur lem, Stoke on Trent has had winding-up notice serviced the Inland Revenue. Belfiele Road Services (Liverpool) Li has asked that it be made clei that it has no connection wii the Stoke firm, "either final cial, operational or any oth, connection."

C. B. CHASTNEY Ltd of Su derland, experts in refrige ated road transport, ha' taken over the three-vehic fleet of Jos Mark and Son Lt Newcastle upon Tyne. Th. claims Chatney will give the the largest refrigerated fleet the North East.