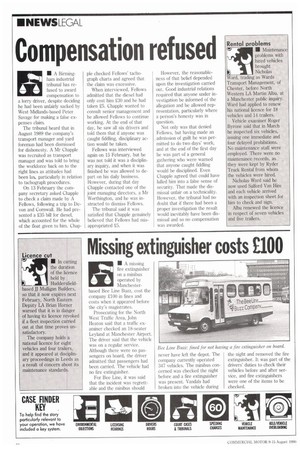 I ham industrial tribunal has re'used to award compensation to a lorry driver, despite deciding he had been unfairly sacked by West Midlands-based Peter Savage for making a false expenses claim.

On 13 February the company secretary asked Chapple to check a claim made by A Fellows, following a trip to Devon and Cornwall. He had presented a 235 bill for diesel, which accounted for the whole of the float given to him. Chap ple checked Fellows' tachograph charts and agreed that the claim was excessive.

When interviewed, Fellows admitted that the diesel had only cost him 230 and he had taken 25. Chapple wanted to consult senior management and he allowed Fellows to continue working. At the end of that day, he saw all six drivers and told them that if anyone was caught fiddling, disciplinary action would be taken.

Fellows was interviewed again on 15 February, but he was not told it was a disciplinary inquiry, and when it was finished he was allowed to depart on his daily business. However, during that day Chapple contacted one of the joint managing directors, a Mr Worthington, and he was instructed to dismiss Fellows.

The tribunal said it was satisfied that Chapple genuinely believed that Fellows had misappropriated 25. However, the reasonableness of that belief depended upon the investigation carried out. Good industrial relations required that anyone under investigation be informed of the allegation and be allowed representation, particularly where a person's honesty was in question.

Not only was that denied Fellows, but having made an . admission of guilt he was permitted to do two days' work, and at the end of the first day he was part of a general gathering who were warned that anyone caught fiddling would be disciplined. Even Chapple agreed that could have lulled him into a false sense of security. That made the dismissal unfair on a technicality. However, the tribunal had no doubt that if there had been a proper investigation the result would inevitably have been dismissal and so no compensation was awarded.