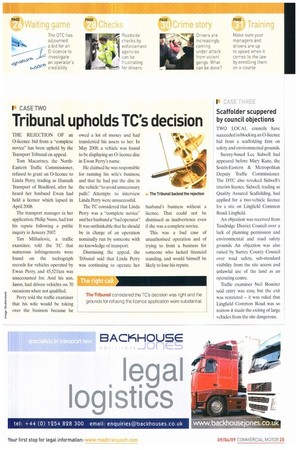 THE REJECTION OF an 0-licence bid from a "complete novice" has been upheld by the Transport Tribunal on appeal.

Tom Macartney, the NorthEastern Traffic Commissioner, refused to grant an 0-licence to Linda Perry, trading as Hannah Transport of Bradford, after he heard her husband Ewan had held a licence which lapsed in April 2008.

The transport manager in her application, Philip Nunn, had lost his repute following a public inquiry in January 2007 Tim Milhailovic, a traffic examiner, told the TC that numerous infringements were found on the tachograph records for vehicles operated by Ewan Perry, and 45,521km was unaccounted for. And his son, Jason, had driven vehicles on 70 occasions when not qualified.

Perry told the traffic examiner that his wife would be taking over the business because he owed a lot of money and had transferred his assets to her. in May 2008, a vehicle was found to be displaying an 0-licence disc in Ewan Perry's name.

He claimed he was responsible for running his wife's business, and that he had put the disc in the vehicle "to avoid unnecessary pulls': Attempts to interview Linda Perry were unsuccessful.

The TC considered that Linda Perry was a "complete novice" and her husband a "bad operator': It was unthinkable that he should be in charge of an operation nominally run by someone with no knowledge of transport.

Dismissing the appeal, the Tribunal said that Linda Perry was continuing to operate her husband's business without a licence. That could not be dismissed as inadvertence even if she was a complete novice.

This was a bad case of unauthorised operation and of trying to front a business for someone who lacked financial standing, and would himself be likely to lose his repute.