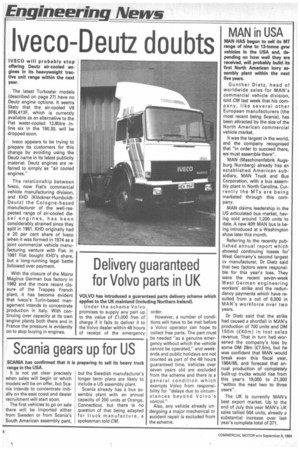 Page 20, 8th September 1984 — Iveco-Deutz doubts
Close
Noticed an error?
If you've noticed an error in this article please click here to report it so we can fix it.

IVECO will probably stop offering Deutz air-cooled engines in its heavyweight tractive unit range within the next year.

The latest Turbostar models (described on page 27) have no Deutz engine options. It seems likely that the air-cooled V8 BF8L413F, which is currently available as an alternative to the Fiat water-cooled 13.8Iitre inline six in the 190.30, will be dropped soon.

lveco appears to be trying to prepare its customers for this change by avoiding using the Deutz name in its latest publicity material. Deutz engines are referred to simply as "air cooled engines."

The relationship between Iveco, now Fiat's commercial vehicle manufacturing division, and KHD (Kleckner-HumboldtDeutz) the Cologne-based manufacturer of the well-respected range of air-cooled diesel engines, has been considerably strained since they split in 1981. KHD originally had a 20 per cent share of lveco when it was formed in 1974 as a joint commercial vehicle manufacturing venture with Fiat. In 1981 Fiat bought KHD's share, but a long-running legal battle followed over payment.

With the closure of the Mainz Magirus German bus factory in 1982 and the more recent closure of the Trappes French plant, it has become evident that lveco's Turin-based management intends to concentrate production in Italy. With continuing over capacity at its own engine plants both there and in France the pressure is evidently on to stop buying in engines.