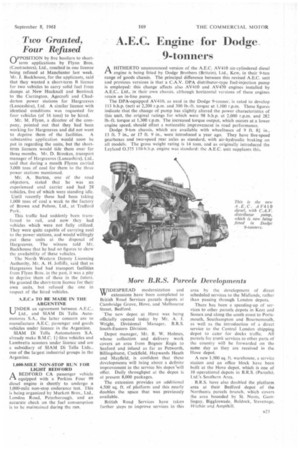 Page 57, 8th September 1961 — More B.R.S. Parcels Developments
Close
Noticed an error?
If you've noticed an error in this article please click here to report it so we can fix it.
Keywords : Biggleswade

The new depot at Hove was being officially opened today by Mr. A. J. Wright, Divisional Manager, B.R.S. South-Eastern Division.

Depot manager, Mr. B. W. Holmes, whose collection and delivery work covers an area from Bognor Regis to Seaford and inland as far as Pctworth, Billingshurst, Cuckfield, Haywards Heath and Mayfield, is confident that these developments will bring about a definite improvement in the service his depot twill offer. Daily throughput at the depot is at present 8,000 packages.

The extension provides an additional 4,500 sq. ft. of platform and this nearly doubles the space that was previously available.

British Road Services have taken further steps to improve services in this area by the development of direct scheduled services to the Midlands, rather than passing through London depots.

There has been a speeding-up of services to other parcels depots in Kent and Sussex and along the south coast to Portsmouth, Southampton and Bournemouth, as well as the introduction of a direct service to the Central London shipping depot to cater for docks traffic. Al] parcels for trunk services to other parts of the country will be forwarded on the same day as they are received in the Hove depot.

A new 1.500 sq. ft. warehouse, a service station and an office block have been built at the Hove depot, which is one of 10 operational depots in B.R.S, (Parcels), Ltd.'s Southern Area.

B.R.S. have also doubled the platform area at their Bedford depot of the Northants parcels branch, which covers the area bounded by St. Neots. Gamlingay, Biggleswade, Baldock, Stevenage, Hitchin and Ampthill.