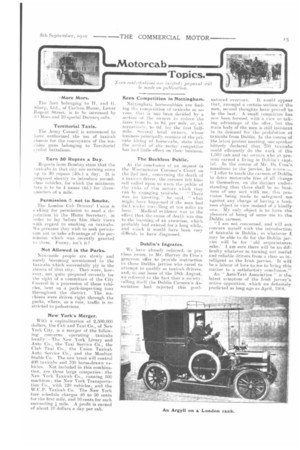 Page 17, 8th September 1910 — Motorcab
Close
Noticed an error?
If you've noticed an error in this article please click here to report it so we can fix it.
Keywords : Transportation In New York City, Taxicab, Taxicabs By Country, Taxicabs Of The United States

The fleet belonging to -Ff. and G. Sharp, Ltd., of Carlton House, Lower Regent Street, is to be increased by rif Mors arid 10 special Darracq cabs.

The Army Council is announced to have authorized the use of taxicab eliassis for the conveyance of the machine guns belonging to Territorial yelist battalions.

Reports from Bombay state that the taxicabs in that city are earning sums 1,p to 30 rupees (40s.) a day. It is I roposed shortly to introduce secondelass vehieles, for which the minimum rare is to be 4 annas (4d.) for three(kiln rters of a mile.

The London Cab Drivers' Union is s..•eking for permission to send a deputation to the Home Secretary, in order to lay before him their views ith regard to smoking on taxicabs. We presume they wish to seek permission not to take advantage of the permission which was recently granted to them. Funny, isn't it

Not Allowed in the Parks.

With a capitalization of 2,500,000 dollars, the Cab and Taxi Co., of New York City, is a merger of the following concerns operating taxicabs locally:—The New York Livery and Auto Co., the Taxi Service Co., the Club Taxi Co., the Union Taxicab Auto Service Co., and the Moulton Stable Co. The new trust will control 400 taxicabs and 700 horse-drawn vehicles. Not included in this combination, are three large companies: the New York Taxicab Co., running 500 machines; the New York Transportation Co., with 120 vehicles; and the W.C.P. Taxicab Co. The New York fare schedule charges 40 to 50 cents for the first mile, and 10 cents for each suceeeding mile. A profit is earned of about 10 dollars a day per cab. Keen Competition in Nottingham.

Nottingham horse-cabbies are finding the competition of taxicabs so severe, that it has been decided by a. seetion of the owners to reduce the fares from k. to 8d. per mile, or, alternatively, to 6d. for the first halfmile. several local owners, whose business prineipally consists of the private hiring of horse-cabs, state that the arrival of the motor competitor has loot little effect on their business.

At the conclusion of an inquest in the Westminster Coroner's Court on the 2nd inst., concerning the death of taxic,ib driver, the coroner felt himself ealle■I upon to warn the publie of the risks of This nature which they ran by engaging taxicabs. There was no knowing," he said. " what might have hoppi.med if the man had died whilst tr.:willing at ten miles an hour." Medical evidence was to the effect that the cause of death was due to the bursting of an aneurism, which probably had existed for a long while, and which it would have been very chiflitult to have diagnosed,

We have already referred. in previous issues, to Mr. Harvey du Cros's generous offer to provide instruetion to those Dublin ,jarvies who cared to attempt to qualify as taxicab drivers, and, in our issue of the 18th August, we referred to the fact that a society, calling itself the Dublin Carmen's Assoeiation bad rejected this good

natured overture. It would appear

that, amongst a certain section of the men, second thoughts have proved to. be the best. A small committee has now been formed, with a view to taking advantage of the offer, but the main body of the men is still insistent in its demand for the prohibition of taxicabs from Dublin. In the course at the latest protest meeting, one speaker bitterly declared that '250 taxiCab& could efficiently do the work of the 1,500 cab and car owners who at present earned a living in Dublin's capital. In the course of Mr. Du Croes manifesto to the jarvies, he wrote:— " I offer to teach the carmen of Dublin to drive motoreabs free of all charge to themselves, on the distinct understanding that there shall be no business of any sort with me, this prevision being made to safeguard me, against any charge of having a business object, in view instead of -a kindlyone. My only object is to hove the pleasure of being of some use to the Dublin carmen.

" I am not concerned, and will not concern myself with the introductkin of taxicabs in Thiblin ; so whatever X may be able to do for the Dublin jarvies will be for ' old acquaintance. sake.' I am sure there will be no difficulty whatever in turning out useful! and reliable drivers from a class so intelligent as the Trish jarvies. It wilt be a labour of love to me to bring this matter to a satisfactory conclusion."

" Anti-Taxi Association " is the latest symptom of the Trish jarvey'm active opposition, which we definitely predicted as long ago as April, 1908.