Steel Shortage Keeps Industry Working at 60 per cent. of 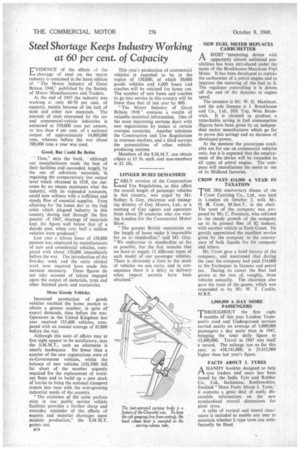 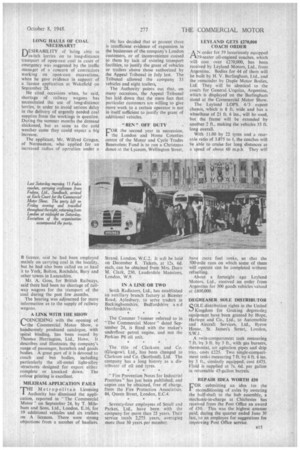 Capacity EV1DENCE of the effects cf the shortage of steel on the motor industry is contained in the latest edition of "The Motor Industry of Great Britain 1948,' published by the Society of Motor Manufacturers and Traders.

At the end of 1947 the industry was working at only 60-70 per cent. of capacity, mainly because of the lack of steel and other raw materials. The amount of steel consumed by the car and commercial-vehicle industries is estimated at 550,000 tons per annum, or less than 4 per cent. of a national output of approximately 14,000,000 tons, whereas before the war about 700,000 tons a year was used.

Good, But Could Be Better Thus," says the book, " although our manufacturers made the best of their facilities and succeeded, largely by the use of substitute • materials, in regaining the comparatively low output level which obtained in 1938, the outcome by no means represents what the industry, with its expanded resources, could now achieve with a sufficient and steady flow of essential supplies. Even allowing for the losses due to the fugl crisis which plagued industry in this country during and through the first quarter of 1947, shortage of materials kept the figure well below that of a decade past, when over half a million vehicles were produced."

Last year a labour force of 158,000 persons was employed by manufacturers of ears and commercial vehicles, compared with about 150,000 immediately before the war. The introduction of the five-day week and the extra clerical work now required have made this increase necessary. These figures do not take account of labour engaged upon the output of materials, tyres and other finished parts and accessories.

More Goods Vehicles Increased production of goods vehicles enabled the home market to obtain a greater number, in spite of* export demands, than before the war. Operators in the United Kingdom last year received 135,600 vehicles, compared with an annual average of 83,000 before the war.

Although this state of affairs may at first sight appear to be satisfactory, says the S.M.M.T., such an allotment is utterly inadequate. No fewer than a quarter of the new registrations were of ex-Government vehicles, whilst the balance of new vehicles (102,500) fell far short of the number urgently required for the replacement of wornout fleets and to build up a new stock of lorries to bring the national transport system into tune with the ever-growing industrial needs of the country.

"The existence of the same parlous state in our public service vehicle facilities provides a further sharp and everyday reminder of the effects of exports and material shortages upon modern production," the S.M.M,T. points out.

This year's production of commercial vehicles is expected to be in the region of 150,000, of which 50,000 goods vehicles and 6,000 buses and coaches will be retained for home use. The number of new buses and coaches to go into service in this country will be fewer than that of last year by 800.

"The Motor Industry of Great Britain 1948" contains a wealth of valuable statistical information. One of the most interesting sections deals with new registrations by makes in certain overseas countries. Another tabulates the Construction and Use Regulations in overseas markets, and a third surveys the potentialities of other vehicleproducing nations.

EARLY revision of the Construction L-Aand Use Regulations, as they affect the overall length of passenger vehicles in this country, was urged by Mr. Sydney S. Guy, chairman and managing director of Guy Motors, Ltd., at a meeting of Guy agents and operators from about 20 countries who are visiting London for the Commercial Motor Show.

"The present British restrictions on the length of buses make it impossible for us to standardize," said Mr. Guy. "We endeavour to standardize so far as possible, but the fact remains that we have to supply 12 different types of each model of our passenger vehicles. There is obviously a limit to the stock of vehicles we can carry, and in consequence there is a delay in delivery when import permits have been obtained." NEW FUEL METER REPLACES CARBURETTER

AMOST Interesting device with apparently almost unlimited possibilities has been introduced under the name of the Brockhouse-Marchant Fuel Meter. it has been developed to replace the carburetter of a petrol engine and to improve the metering of the fuel to it. The regulator controlling it is driven off the end of the dynamo at engine speed.

The inventor is Mr. W. D. Marchant, and the sole licensee is J. Brockhouse and Co., Ltd., Hill Top, West Bromwich. It is claimed to produce a remarkable saving in fuel consumption (figures have been given by an independent motor manufacturer which go far to prove this saving) and an increase of developed power.

At the moment the prototypes available are for use on commercial vehicles only, but it is expected that the employment of the device will be extended to all types of petrol engine. The company will manufacture the meter at :Inc of its Midland factories.

HE 28th anniversary dinner of the L Crow Carrying Co., Ltd., was held in London on October 2, with Mr. H. 14. Crow, M.Inst.T., in the chair. The toast of the company was proposed by Mr. C. Fountain, who referred to the steady growth of the company up to its present fleet of 82 tankers, with another vehicle at Earls Court. He greatly appreciated the excellent service given by the company in the conveyance of bulk liquids for his company and others.

Mr. Crow gave a brief history of the company, and mentioned that during the year the company had paid £14,000 to the Exchequer in licences and petrol tax. During its career the fleet had grown at the rate of, roughly, three vehicles annually. The chairman also gave the toast of the -guests, which was responded to by Mr. W. T. Cockle, M.B.E.

A HANDY booklet designed to help CI tyre traders and users has been issued by the India Tyre and Rubber Co., Ltd., Inchinnan, Renfrewshire. Entitled "More Facts About L Tyres,' it contains a great deal of easily discernible information on the new standardized overall dimensions for giant tyres.

A table of vertical and lateral clearances is included to enable any user to ascertain whether L-type tyres can satisfactorily be fitted. LONG HAULS OF COAL NECESSARY?

DESIRABILITY of being able to L./switch lorries on to long-distance transport of open-cast coal in cases of emergency was suggested by the traffic manager of a concern of contractors working on open-east excavations, when he gave evidence in support of a licence application at Wakefield on September 28.

He cited occasions when, he said, shortage of railway wagons has necessitated the use of long-distance lorries, in order to avoid serious delay in the delivery of urgently needed coal supplies from the workings in question. During the summer months the demand slackened, but as soon as the cold weather came they could expect a big increase.

The applicant, Mr. Wilfred Grogan, of Normanton, who applied for an increased radius of operation under a

B licence, said he had been employed mainly on carrying coal in the locality, but he had also been called on to haul it to York, Bolton, Rochdale, Bury and other towns in Lancashire.

Mr. A. Goss, for British Railways, said there had been no shortage of railway wagons for the transport of the coal during the past few months.

The hearing was adjourned for more information as to the supply of railway wagons.

A LINK WITH THE SHOW

rOINCIDING with the opening of

the Commercial Motor Show, a handsomely produced catalogue, with spiral binding, has been issued by Thomas Harrington, Ltd., Hove. It describes and illustrates the company's range of passenger, horsebox and goods bodies. A great part of it is devoted to coach and bus bodies, including particularly the all-metal light-alloy structures designed for export either complete or knocked down. The colour printing is excellent.

• THE Metropolitan Licensing I Authority has dismissed the application, reported in "The Commercial Motor" on September 24, by T. Mileham and Sons, Ltd., London. E.16, for 19 additional vehicles and six trailers on A licences. There were strong objections from a number of hauliers. He has decided that at present there is insufficient evidence of expansion in the businesses of the company's London customers, or of inconvenience caused to them by lack of existing transport facilities, to justify the grant of vehicles or trailers above those authorized by the Appeal Tribunal in July last. The Tribunal allowed the company 33 vehicles and eight trailers..

The Authority points out that, on many occasions, the Appeal Tribunal has laid down that the mere fact that particular customers are willing to give more work to a certain operator is not in itself sufficient to justify the grant of additional vehicles.

VOR the second year in succession,

the London and Home Counties centre of the Motor and Cycle Trades Benevolent Fund is to run a Christmas dance at the Lyceum, Wellington Street, Strand, London, W.C.2. It wtll be held on December 8. Tickets, at 12s. 6d. each, can be obtained from Mrs. Doris M. Clark, 230, Lauderdale Mansions, London. W.9.

The Commer 7-tonner referred to in "The Commercial Motor" dated September 24, is fitted with the maker's underfloor petrol engine, and not the Perkins P6 oil unit.

" Fire Prevention Notes for Industrial Premises" has just been published, and copies can be obtained, free (If charge. from the Fire Protection Association. 84. Queen Street, London, E.C.4.

Seventy-four employees of Small and Parkes. Ltd., have been with the company for more than 25 years. Their service totals 2,275 years, averaging more than 30 years per member.

_ A N order for 59 luxuriously equipped 1—X39-seater oil-engined coaches, which will cost over £270,000, has been received by Leyland Motors, Ltd., from Argentina. Bodies for 44 of them will be built by H. V. Burlingham, Ltd., and the remainder by Duple Motor Bodies, Ltd. They will be identical to the coach for General Urquiza, Argentina, which is displayed on the Burlingham stand at the Commercial Motor Show.

With 11.00 by 22 tyres and a rearaxle ratio of 3.875 to 1, the coaches will be able to cruise for long distances at a 'speed of about 60 m.p.h. They will have extra fuel tanks, so that the 500-mile runs on which some of them will operate can be completed without refuelling.

About a fortnight ago Leyland Motors, Ltd., received an order from Argentina for 300 goods vehicles valued at £600,000.

FOR submitting an idea tor the reconditioning of axles by sweating the half-shaft to the hub assembly, a mechanic-in-charge at Chichester has received from the Post Office an award of £50. This was the highest amount paid, during the quarter ended June 30 last, to an employee for suggestions fot improving Post Office service.