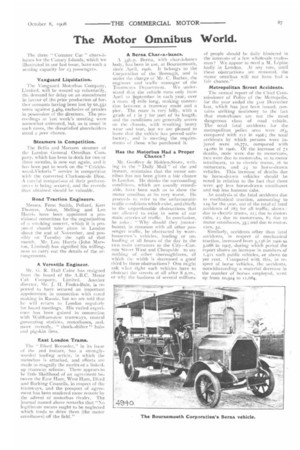 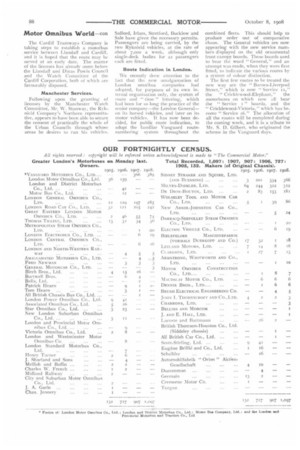 The three " Commer Car " chars-abanes for the Canary Islands, which we illustrated in our last issue, have each a seating capacity for 23 passengers.

The Vanguard Motorbus Company, Limited, will be wound up voluntarily, the demand for delay on an amendment in favour of the prior production of further accounts having been lost by 62,552 votes against 5,469, exclusive of proxies in possession of the directors. The proceedings at last week's meeting were somewhat animated, but, as is usual in such eases, the dissatisfied shareholders stood a poor chance.

The Bellis and Morcom steamer of the London General . Omnibus Company, which has been in dock for two or three months, is now out again, and it has been put to work on the " Cricklewood-Victoria " service in competition with the converted ClarksonLde Dion. A careful comparison of their performances is being secured, and the records thus obtained should be valuable.

Messrs. Frost Smith, Pollard, Kerr Thomas, Aston, Melling and Leo Harris have been appointed a provisional committee for the organisation of a smoking concert, which it is pronoafal should take place in London about the end of November, and possibly on Tuesday the 24th of that month. Mr. Leo. Harris (John Marston, Limited) has signified his willingneas to carry out the details of the arran gel nun ts.

Mr. G. R. hall Caine has resigned from the board of the A.B.C. Motor Cab Company, Limited. Another director, Mr. j. H. Fooks-Bale, is reported to have secured an important appointment in connection with canal making in Russia, but we are told that lie‘yill return to London regularly for board meetings. His varied experi

The " Ilford Recorder," in its issue of the and instant, has a stronglyworded leading article, • in which the motorbus is attacked, and efforts are made to magnify the merits of a linkedup tramwayscheme. There appears to be little likelihood of an agreement between the East Ham, West Ham, Ilford and Barking Councils, in respect of the tramways, and the prospect of agreement has been rendered more remote by . the advent of .motorbus rivalry. The journal named above remarks that "No legitimate means ought to be neglected which tends to drive them (the motor omnibuses) off the field."

A 3511.p. Barna, with char-a-bancs body, has been in use, at Bournemouth, since April, 1906. It belongs to the Corporation of the Borough, and is under the charge of Mr. C. Barber, the engineer and traffic manager of the Tramways Department. We understand that the vehicle runs only from April to September in each year, over a route II mile long, making connection between a tramway route and a pier. The route is very hilly, with a grade of i n 7 for part of its length, and the conditions are generally severe on the chassis, with resulting heavy wear ;Ind tear, but we are pleased to learn that the vehicle has proved sadtsfactory, and is meeting the requirements of those who purchased it.

Has the Motorbus Had a Proper Chance'

Mr. Geoffrey de Holden-Stone, writing in the " bailv Mail " of the and instant, maintains that the motor omnibus has not been given a fair chance in Lica-atom He thinks the surrounding conditions, which are usually remediable, have been such as to show the motor omnibus at its very worst. He proceeds to refer to the unfavourable traffic conditions which exist, and chiefly to the unpardonable obstructions that are allowed to exist in some of our main :irteries of traffic. in conclusion, he asks: " Why should they (motorbuses), in coalition with all other passenger traffic, be obstructed by warehousemen's vehicles, loading or unloading at all hours of the day in the two main entrances to the City—Cannon Street \Vest and Cheapside to say nothing of other thoroughfares, Of

which the width is decreased a good third by these obstructions? One might ask wind right such vehicles have to obstruct the streets at all after 8 a.m., or why the business of several millions of people should be daily hindered in the interests of a few wholesale tradesmen? We appear to need a M. la'pine badly in London. At any rate, until these obstructions are removed, the motor omnibus will not have had a fair chance."

The annual report of the Chief Commissioner of Police of the Metropolis, for the year ended the 31st December last, which has just been issued, conmina striking testimony to the fact that motorbuses are not the most dangerous class of road vehicle. The total fatal accidents for the metropolitan police .area were 283, compared with 212 in 906; the total accidents by which persons were injured were 16,772, compared with 14,060 in 1906. Of the increase of 71 deaths, none were due to motorvans, two were due to motorcabs, in to motor omnibuses, m to electric trams, 26 to motorcars, and 23 to horse-draW11 vehicles. This increase of deaths due to horse-drawn vehicles should be noted in relation to the fact that there were 407 less horse-drawn omnibuses and 6g6 less hansom cabs.

Similarly, accidents other than fatal accidents, in respect of mechanical traction, increased from 3,136 in 'nob to 5,088 in 1907, during which period the report shows an increase in numbers of 1,421 such public vehicles, or above 6o per cent. Compared with this, in respect of horse vehicles, the accidents, notwithstanding a material decrease in the number of horses employed, went up from 10,924 to 11,684. The Cardiff Tramways Company is taking steps to establish a motorbus service between I.landaff and Cardiff, and it is hoped that the route may be served at an early date. The matter of the licenses has already come before the Llandaff and Dinas Powis Council and the Watch Committee of the Cardiff Corporation, both of which are favourably disposed.

Following upon the granting of licenses by the Manchester Watch Committee, Mr. W. Stanway, the Ryknield Company's Northern representative, appears to have been able to secure the consent of practically the whole of the Urban Councils through whose areas he desires to run his vehicles. Salford, Irlam, Stretford, Bucklow and Sale have given the necessary permits. Passengers are being carried, by the two Ryknield vehicles, at the rate of about 7,000 a week, although only single-deck bodies for 22 passengers each are fitted_

We recently drew attention to the fact that the new amalgamation of London omnibus companies had adopted, for purposes of its own internal organisation only, the system of route and " time " lettering, which had been for so long the practice of the senior company—the London General— on its horsed vehicles, and later on its motor vehicles. It has now been decided, for public route indication, to adopt the familiar Vanguard routenumbering system throughout the combined fleets. This should help to produce order out of comparative chaos. The General vehicles are now appearing with the new service numbers displayed on the old ornamental front canopy boards. These boards used to bear the word ." General," and an attempt was made, when they were first fitted, to indicate the various routes by a system of colour distinction.

The first few routes to he treated the new way are the " Barnes-Liverpool Street," which is now " Service -II,"

the " Cricklewood-Elephant," the motorbuses on which now all bear the " Service t " boards, and the " Cricklewood-Victoria," which has become " Service 16." The aIloc.ation of all the routes will be completed during the coming week, and it is a tribute to Mr. S. D. Gilbert, who originated the scheme in the Vanguard days.