The London and Glasgow Parades. 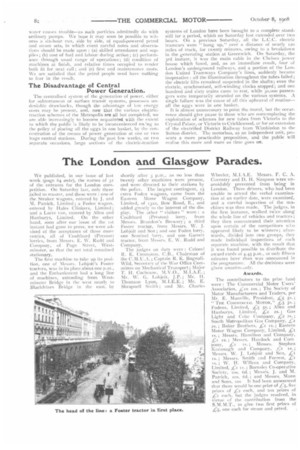 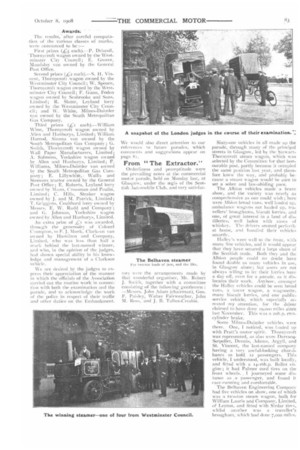 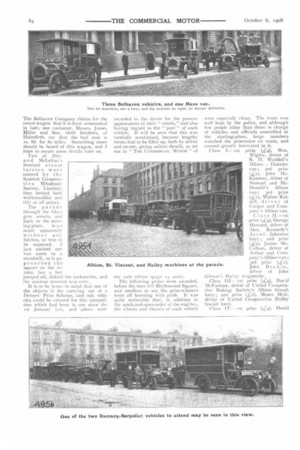 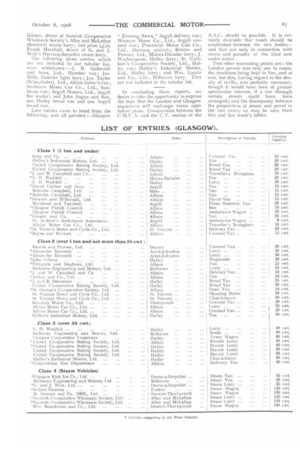 Page 2, 8th October 1908 — The London and Glasgow Parades.
Close
Noticed an error?
If you've noticed an error in this article please click here to report it so we can fix it.
Keywords : Steam Wagon, Edwin Foden, Sons & Co., Wagons, Thornycroft, Lorry, Truck, Argyll

We published, in our issue of last week (page 64 ante), the names of 32 of the entrants for the London competition. On Saturday last, only three failed to muster, and these were : one of the Straker wagons, entered by J. and M. Patrick, Limited ; a Foden wagon, .entered by Hales Clinkers, Limited ; and a Lacre van, entered by Allen and Hanburys, Limited. On the other hand, soon after our issue of the instant had gone to press, we were advised of the acceptance of three more entries, all of Coulthard (Preston) -lorries, from Messrs. E. W. Rudd and Company, of Page Street, Westminster, so that the net total remained stationary.

The first machine to take up its position, one of Messrs. Lobjoit 's _Foster 'tractors, was in its place about one p.m., and the Embankment had a long line of machines, extending from Westminster Bridge in the west nearly to Blackfriars Bridge in the east, by

shortly after 3 p.m., as no less than twenty other machines were present, and were directed to their stations by the police. The largest contingent, 15 extra Foden wagons, came from the Eastern Motor Wag-on Company, Limited, of 131a, Bow Road, E., and added greatly to the interest of the display. The other " visitors " were : a Coulthard (Preston) lorry, from Messrs. Brandon's Brewery; a third Foster tractor, from Messrs. W. J. Lobjoit and Son ; and one Foden lorry, one Sentinel lorry, and one Garrett tractor, from Messrs. E. XV. Rudd and Company.

Mr. W. G. Lobjoit, Mr. H. Thomson Lyon, M.I.E.E.; Mr. E. Shrapnell Smith ; and Mr. Charles Wheeler, M.1.A.E. Messrs. F. C. A. Coventry and D. H. Simpson were unavoidably prevented from being in London. Three drivers, who had been unable to attend the verbal examination at an earlier date, were examined, and a careful inspection of the machines was then made. The judges, in the first instance, walked twice along the whole line of vehicles and tractors; they then concentrated their attention upon certain of the competitors who appeared likely to be winners; afterwards, divided into two groups, they made individual inspections of each separate machine, with the result that it was found possible to distribute the award cards at 4.45 p.m., Or Only fifteen minutes later than was announced in the programme. All the decisions were given unanimously.

The contributors to the prize fund were : The Commercial Motor Users' Association, L;to ms. ; The Society of Motor Manufacturers and Traders, per Mr. E. Manville, President, "THE COMMERCIAL MOTOR," Zs 5s. ; Fodens, Limited, L:5 5s.; Allen and Hanburys, I.imited, La 2S. ; Gas Light and Coke Company, La 2s.; South Metropolitan Gas Company, -1:2 2S. ; Baker Brothers, Li is.; Eastern Motor Wagon Company, Limited, Li is.; Messrs. Hamilton and Company, Li is.; Messrs. Haydock and Corn pany, Li IS. ; Messrs. Stephen Kavanagh rind Company, t is.; Messrs. W. J. Lobjoit and :Son, Li ; Messrs. Smith and Forrest, LI is.; W. H. Willcox and Company, Limited, Li ts. ; Barnsley Co-operative Society, ms. 6d. ; Messrs. J. and M. Patrick, ins. 6d. ; and Messrs. Mann and Sons, los It had been announced that there would he one prize of 1:5, five prizes of L'.72 each, and ten prizes of each, hut the judges resolved, in virtue of the contribution from the S.M.M.T., to give two first prizes of Ls one each for steam and petrol. '. Awards. "

The result, after careful computation of the various classes of marks, were announced to be :— First prizes (Z's each).---P, Driscoll, .Thornycroft wagon owned by the Westminster City Council; E. Grover, MaudslaY van owned by the General Post Office.

An extra prize of .11:t was awarded, through the generosity of Colonel Crompton, to F. J. Monk, Clark-on van owned by Hamilton and Company, Limited, who was less than half a mark behind the last-named winner, and who, in the opinion of the judges, had shown special ability in his knowledge and management of a Clarkson vehicle.

We are desired by the judges to express their appreciation of the manner in which the officials of the Association carried out the routine work in connection with both the examination and the parade, and to acknowledge the work of the police in respect of their traffic and olher duties on the Embankment. We would also direct attention to our references to future parades, which commerus and suggestions appear on page .

Orderliness and promptitude were the prevailing notes at the commercial motor parade, held on Monday last, at Glasgow, under the wgis of the Scottish Automobile Club, and very satisfac.

tory were the arrangements made by that wonderful organiser, Mr. Robert J. Smith, together with a committee consisling of the following gentlemen : —Messrs. John Adam (chairman), Geo. F. Paisley, Walter Fairweather, John M. Ross, and J. B. Talbot-Crosbie. Sixty-one vehicles in all made up the parade, through many of the principal streets in Glasgow, led by the StewartThornvcroft steam wagon, which was selected by the C01112T1iLlec for that honourable post, partly because it occupied the same position last year, and therefore knew the way, and probably be. cause a steam wagon would be sure to set a sober and law-abiding pace.

The Albion vehicles made a brave show, and the variety was nearly as comprehensive as one could wish ;"here were Albion bread vans, well loaded up, ambulance wagons not loaded up, travellers' broughams, biscuit lorries, and one, of great interest in a land ■.rf distilleries, well laden with cases of whiskey. The drivers seemed perfectly at haute, and handled their vehicles smartly.

Halley's were well to the front, with many fine vehicles, and it would appear Ihat they have secured a large share of the Scottish trade. Both they and the Albion people could no doubt have found double as many vehicles in use, in Glasgow alone; but users are not always wiling to [et their lorries have a day off, even for a parade, as it dislocates their work. Anyhow, amongst the Halley vehicles could be seen bread vans, a tower wagon, a wagonette, many biscuit lorries, and one publicservice vehicle, which especially arrested my attention, for the driver claimed to have done to,000 miles since last November. This was a 2oh.p. fwo-cylinder brake.

Some Tilnes-Dainiler vehicles were there. One, I noticed, was loaded up with Pratt's. motor spirit. Thornycroft was represented, as also were DarracqSerpollet, Dennis, Adams, Argyll, and St. Vincent, the last-named company having a very useful-looking char-hbanes to hold 12 passengers. This vehicle, I understood, was buik

and fitted with a 14-16h.p. Ballot engine; it had Palmer cord tires on the

front wheels. , journeyed some distance as a pas-senger, and found it erts,v-running and comfortable.

The Belhaven Engineering Company had five vehicles on show, one of which was a two-ton steam wagon, built for William Laurie and Company, Limited, of T.eyton, and fitted with girdar tires, whilst another was a traveller's brougham, which had done 7,opo miles.

The Belhaven Company claims for the steam wagon that it is most economical in fuel; one customer, Messrs. James Miller and Son, cloth finishers, of Holmfirth, say that the fuel cost is is. 8d. for So miles. Something more should be heard of this wagon, and I hope to secure some details later on.

Two of Ale and an d McLellan\ Sentinel s tc a in lorries were entered by the Scottish Co-operative Wholesale Society, Limited ; they looked both workmanlike and tidy at all points.

The parade through the Glasgow streets, and back to the start

ing-place, was made apparently without any hitches, as was to be expected. I just noticed one van come to a standstill, as it approached the square on the return, but a boy jumped off, tickled the carburetter, and the anxious moment was over.

It is to be borne in mind that one of the objects is the carrying out of a Drivers Prize Scheme, and only vehicles could be entered for this competition which had been in use since the ist January last, and ptiizes were

awarded to the driver for the present appearances of their " steeds," and also having regard to the " past " of each vehicle. It will be seen that this was carefully scrutinised, because lengthy forms had to be filled up, both by driver and owner, giving salient details, as set out in " THE COMMERCIAL. MOTOR of the loth ultimo (page 13 autc}.

The following prizes were awarded, before the men left Blyths.wood Square, and needless to say the prize-winners went off beaming with pride. It was quite noticeable that, in addition to the spick-and-span order of the engines, the wheels and chassis of each vehicle were especially clean. The route was well kept by the police, and although few people other than those in charge of vehicles and officials assembled at the starting-place, large numbers watched the procession en route, and seemed greatly interested in it. Class I.-1st prize (4.4), Wm.

In concluding these reports, we desire to take the opportunity to express the hope that the London and Glasgow organisers will exchange views upon future plans. Co-operation between the C.M.U.A. and the C.V. section of the

S.A.C. should be possible. Ills certainly desirable that touch should be established between the two bodies— and that not only in connection with meets and parades of the kind now under notice.

Two other interesting points are: the London parade was only one in name, the machines being kept in line, and at rest, but this, having regard to the density of traffic, was probably necessary, though it would have been of greater spectacular interest, if a run through certain streets could have been arranged; and the discrepancy between the proportions of steam and petrol in the two cases, as may be seen from this and last week's tables.