JACK RICHARDS AND SON: THE RISK OF EMPTY RUNNING 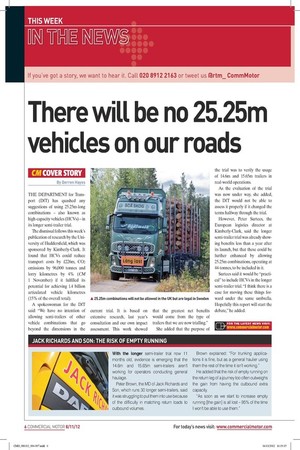 Page 4, 8th November 2012 — JACK RICHARDS AND SON: THE RISK OF EMPTY RUNNING
Close
Noticed an error?
If you've noticed an error in this article please click here to report it so we can fix it.

Peter Brown, the MD of Jack Richards and Son, which runs 30 longer semi-trailers, said it was struggling to put them into use because of the difficulty in matching return loads to outbound volumes. Brown explained: “For trunking applications it is fine, but as a general haulier using them the rest of the time it isn’t working.” He added that the risk of empty running on the return leg of a journey too often outweighs the gain from having the outbound extra capacity.

“As soon as we start to increase empty running [the gain] is all lost – 95% of the time I won’t be able to use them.”