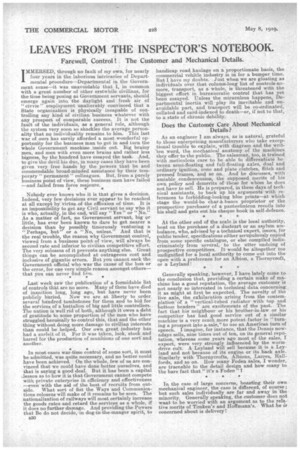 Page 8, 8th May 1919 — LEAVES FROM THE INSPECTOR'S NOTEBOOK.
Close
Noticed an error?
If you've noticed an error in this article please click here to report it so we can fix it.

IMMERSED, through no fault of my own, for nearly four years in the laborious intricacies of Departmental procedure—Departmental in the Govern

ment sense—it was unavoidable that I, in common with a great number of other erstwhile civilians, for the time being posing as Government servants, should emerge again into, the daylight and fresh air of " civvie "" employment unalterably convinced that a State organization is physically incapable of controlling any kind of civilian business whatever with any prospect of comparable success. It is not the fault of the individuals, as a general rule, although the system very soon, so shackles the average personality that no individuality remains.to him. This last war of ours has surely afforded a most wonderful opportunity for the business man. to get in and turn, the whole Government machine inside out. Big brainy men, and men with even more brains and rather less bigness, by the hundred have essayed the task. And, to give the devil his due, in many cases they have been given very free hands by the powers that be and commendable broad-minded assistance by their temporary " permanent " colleagues. But, from a purely business point of view, these business men have failed —and failed from force naajeure.

Nobody ever knows who it is that gives a decision.

Indeed, very few decisions ever appear to be reached at all except by virtue of the effluxion of time. It is an impossibility to get any Civil servant to say who it is who, actually, in the end, will say " Yes " or " No." As a matter of fact, no Government servant, big or little, has ever been known to dare to get nearer a decision than by possibly timorously venturing a "Perhaps, but" or a "No, unless.' And that is the real trouble, the reason why Government control, viewed from a business point of view, will always be second rate and inferior to civilian competitive effort. The very colossus of it prevents anything else. Great things can be accomplished at outrageous cost and inclusive of gigantic errors. But you cannot sack the Government official who was the cause of the loss or the error, for one very simple reason amongst others— that you can never find him.

Last week saw the publication of a formidable list of controls that are no more. Many of them have died of inanition long, long ago, but have never been publicly buried. Now we are at liberty to order several hundred tombstones for them and to bid for the services of a battalion of big and little controllers. The nation is well rid of both, although it owes a debt of gratitude to some proportion of the men who have struggled heroically to control this, that and the other thing without doing more damage to civilian interests than could be helped. Our own great industry has had a surfeit of it. For it was taken, lock, stock and barrel for the production of munitions of one sort and another.

In most eases war-t• ime control of some sort, it must be admitted, was quite necessary, and no better could have been achieved. On the whole, few of us are convinced that we could have done better ourselves, and that is saying a good deal. But it has been a capital ...lesson as to how it is that Government cannot compete with private enterprise in efficiency and effectiveness —even with the aid of the beat of recruits from outside. What sort of fist the Ways and Cernmunieations colossus will make of it remains to be seen. The nationalization of railways will most certainly increase the goods rates and retard the services as a whole, if it does no further damage. And providing the Powers that Be do not decide, in dog-in-the-manger spirit, to

B30 handicap road haulage on a proportionate basis, the commercial vehible industry is in for a bumper time. But I have my doubts. . Just when we are gloating as individuals over that column-long list of controhanomore, transport, as a whole, is threatened with the biggest effort in bureaucratic control that has yet been essayed. Unless the miraculous happens, Departmental inertia will -play its inevitable and unavoidable part, and transport will be co-ordinated, collated and card-indexed to death—or, if not to that, to a state of chronic debility.

Does the Customer Care About Mechanical Details?

As an engineer I am always, as is natural, grateful to those enterprising manufacturers who take exceptional trouble to explain, with diagram and the writ'ten word, the mechanical anatomy of the machines they offer to the public. The salesman, too, is trained with meticulous care to be able to differentiate between semi-floating and full-floating axles, dual and ordinary ignition, cone and plate clutches, flitch and pressed frames, and so on. And he discusses, with amiable condescension, the supposed merits of his own policy and demerits of those for whom he does not have to sell. He is prepared, in these days of technical assistants, to back up his arguments with references to forbidding-looking blue prints—at which stage the would-be char-h-bancs proprietor or the prospective purchaser of a pantechnicon recoils into his shell and gets out his cheque book in self-defence.

At the other end of the scale is the local authority, bent on the purchase of a dustcart or an asylum ambulance, who, advised by a technical expert, issues, for public tender, specifications either scrupulously copied from some specific catalogue, or else compiled indiscriminately from -several, to the utter undoing of prospective competitors. It-weuld be altogether too undignified for a local authority to come out into the open with a preference for an Albion, a Thornycroft,

Generally speaking, however, I have lately come to the conclusion that, providing a certain make of machine has a good reputation, the average customer is not nearly so interested in technical data concerning. it as might at first be expected. The novelty of the live axle, the exhilaration arising from the contemplationof a "vertical-tubed radiator with top and bottom headers" are excitements of the past. The fact that his neighbour or his brother-in-law or his competitor has had good service out of a similar machine is a very much more potent factor in "turning a prosct into a sale," to use an American turn of speech. I imagine, for instance, that the Dennis nowadays sells, nine times out of ten, on its general reputation, whereas some years ago most of the sales, I expect, were very strongly influenced by the wormdrive cult. A Leyland will sell because it is a Leyland and not because of its engine or its back axle. Similarly with Thornycrofts, Albions, Lacres,

fords, and so on. How many Paden sales, I wonder, are traceable to the detail design and how many to the bare fact that "it's a Foden "

In. the case of large concerns, boasting their own mechanical engineer, the case is different, of course ; but such sales individually are far and away in the minority. Generally speaking, the customer does not want to be worried with an argument as -to the relative merits of Timken's and Hoffmann's. What he is concerned about is delivery!